Amazing Cast in Place for Italy's version of "The Little Prince" 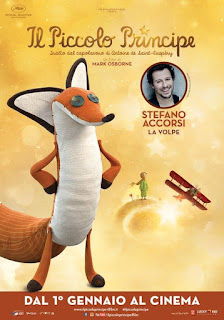 "Il Piccolo Principe" is set to be released on New Years Day in Italy.

"Il Piccolo Principe" is the story of an old and eccentric aviator and her new neighbor, a very mature girl who moved nearby with her mother. Through the pages of the aviator's diary and her drawings, she discovers how the pilot had crashed in a desert and had met the Little Prince, an enigmatic boy that comes from another planet. The experiences of the aviator and the story of the Little Prince travel to other worlds to help create a link between the pilot and the little girl. Using this extraordinary adventure, the child learns to use her imagination and rediscover her infancy.

Directed by Mark Osborne, "The Little Prince" was shown earlier this year at the Cannes Film Festival and will hit Italian theaters January 1st. Check out the trailer...