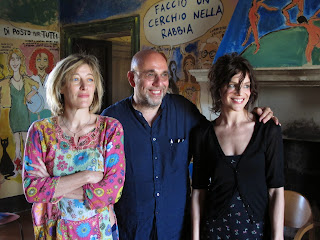 Paolo Virzì's latest film, "La pazza gioia" was just sold to France, Turkey, Israel, Austria e Greece. The film stars Valeria Bruni Tedeschi and Micaela Ramazzotti as two patients with psychiatric issues who flee the community hospital where they met to embark on a road trip from Tuscany to Rome.

Virzì describes "La pazza gioia" as an "adventure film, hovering between irony and drama.. We explore the tenuous boundary between sanity and insanity, immersing ourselves in the heart of those condemned to the social stigma of madness and trying to observe, through their eyes, the fragility, poverty and sometimes the ferocity of our lives considered normal."

We'll keep you posted on more distribution information as it becomes available. In the meantime, check out an earlier post on Paolo Virzì's career.. http://italiancinemaarttoday.blogspot.com/2015/01/paolo-virzis-latest-film-hits-american.html