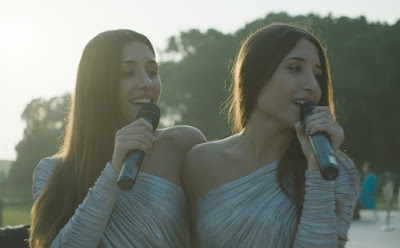 After having had the immense pleasure of covering the 2016 edition of Open Roads for CUNY TV, I am thrilled to return in 2017 as a guest correspondent for Italian Cinema Today.  As a filmmaker, it is always exciting to see what my colleagues have created and I particularly love talking to them about their work and promoting them, especially films that might not otherwise receive wide exposure in the U.S.

Pif is a revelation. I now regret not watching Le Iene while I lived in Italy (too busy making my own films!), as his presence is a welcome combination of profound sensitivity, intelligence, sharp yet considerate wit and unexpected affability.
We sat down for a conversation that evoked tears, provocative political discussion, and much laughter. Oh, and we talked about his latest film, At War for Love.

Veteran filmmaker, the avuncular Roberto Andò, had already worked with onscreen veterans, Toni Servillo and Daniel Auteuil, prior to embarking on The Confessions. In this clip, we get right to the heart of the symbolism in his most recent film, which centers around the suicide of the director of the IMF and the subsequent actions of the G8, isolated in a German hotel for their annual meeting, spurred by the IMF director’s confession to a monk.

Edoardo De Angelis is characteristically Neapolitan, as shines through in both his Indivisible – loosely based on Todd Browning’s Freaks – as well as in our interview. The film is a devastating account of human spirit in conjoined twins whose desire for individuality and emancipation is so strong, they must resort to extreme, perilous acts to assert their will.

The protagonists of Indivisible, Angela and Marianna Fontana, are cinematic gems: darling, professional, sweet and highly intelligent. In an industry in which women are still greatly excluded, these two give hope for the future.  Their heart-wrenching performances in this film are agonizingly beautiful and well-prepared.

Irene Dionisio, a young emerging director, who after seven documentaries debuted her first narrative feature, is also newly-inaugurated Director of Lovers Film Festival, the Torino Gay & Lesbian Film Festival. We are working on a feature story about her work.