"Il Commissario Montalbano" is one of Italy's most popular television series and its record-breaking new season is underway with ten million people having tuned into the premiere last week. The series was halted for a few years, but just started back up and fans could not be happier.

Based on Andrea Camilleri's famous detective novels, the show is filmed mostly in the gorgeous Sicilian province of Ragusa with Montalbano's headquarters in Scicli (home of Italo the dog). The plot is centered on the life and work of Commissioner Salvo Montalbano, played by one of Italy's most adored actors, Luca Zingaretti. Commissioner Montalbano is a focused yet friendly police investigator who is both respected and feared. He's your average working-class good guy going after criminals, trying to make the world a better place. The popularity of "Il Commissario Montalbano" has inspired movies, theater productions and the prequel, "Il giovane Montalbano", which features Pugliese actor, Michele Riondino, the star of Ricky Tognazzi's 2015 RAI series, "Pietro Mennea - La Freccia del Sud". 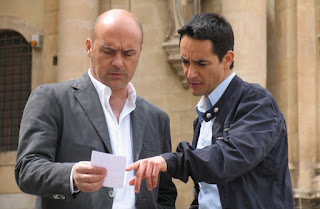 Costarring alongside Zingaretti is Cesare Bocci in the role of Vice-Commissario Domenico "Mimì" Augello and Calabria-born actor, Peppino Mazzotta as his assistant, Inspector Giuseppe Fazio. Recently of "Anime nere" fame, Mazzotta's easy-going, friendly character in this series is a 180 degree turn from the intense "Rocco" in "Anime nere". Watching him in the role of Inspector Fazio will make you appreciate the greatness of his talent.

"Il Commissario Montalbano" airs Mondays in Italy on Rai 1 and in America on RAI International. Unfortunately, there are not English subtitles but there are plenty of beautiful shots of the stunning Ragusa landscape and Scicli structures. For more information, check out the show's page on Rai.
at March 07, 2016

Andrea De Sica is the grandson of neorealist legend Vittorio De Sica and the son of famed movie composer Manuel De Sica. He may have been h...