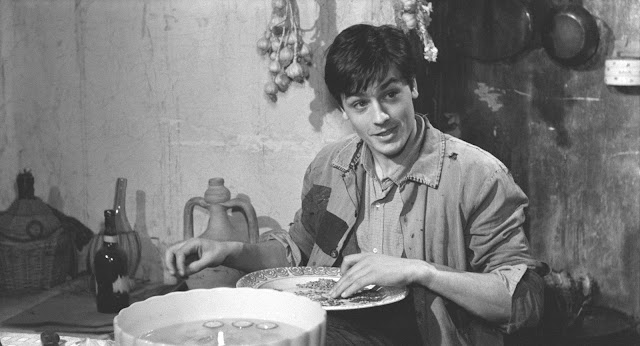 Rocco e i suoi fratelli (Rocco and his Brothers), Visconti's emotional tale of immigration is available in its glorious 4K restoration on FilmStruck. A collaboration between the Gucci Film Foundation and Martin Scorsese, the project was supervised by the maestro of cinematography himself, Giuseppe Rotunno, the film's original director of photography.

The restored version includes several shots that were censored and cut from the original version after the film's premiere at the Venice Film Festival in 1960. The restoration was completed in 2015 and shown that year at the Cannes Film Festival with much of the cast in attendance, including Claudia Cardinale and Alain Delon. Check out Martin Scorsese's introduction with before and after shots of the restoration..

Inspired by the stories of Milanese writer/playwright Giovanni Testori, Visconti's 1960 film, Rocco e i suoi fratelli is the harsh story of the Parondi family from the southern Italian region of Basilicata, then referred to only as Lucania, that immigrates to the northern city of Milan. The film recounts the family's misery and difficulty as Rosa, the matriarch and mother of four boys, tries to hold her family together, ensuring the best future possible for them. However, the cold reality of life makes that dream seem unattainable. The few moments of joy the family experiences together are spent around the kitchen table. When Rosa breaks the bread for her four children, she is reminding them not to break the traditions and roots they have in their warm, majestic land of Lucania.

Although made in 1960, the situation can be placed in 2018. The story is timeless and so are the struggles. The acting is superb with pent up anger and passionate scenes between Simone (Renato Salvatori) and Rocco (Alain Delon) as they fall for the same girl, free-spirited Nadia (Annie Girardot). But one of the film's most impressive performances comes from Greek actress Katina Paxinou who plays a worrisome mother from Lucania. What a strong, heartfelt performance she gave. You'd never know she wasn't of Italian origin. 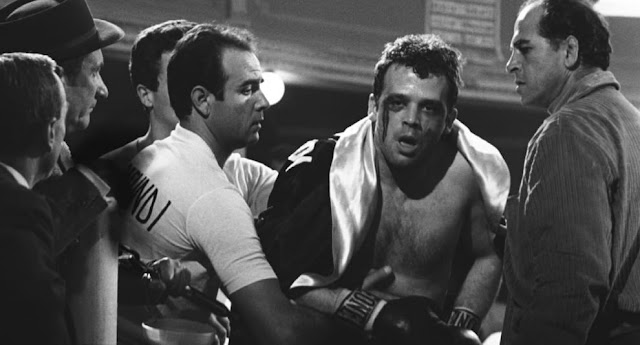 The set design is fantastic, and that ambience makes it easy to understand why Rocco dreams of one day returning to his beloved land of Lucania. Somehow in the middle of his family's poverty, there is the richness of love and a strong sense of optimism that together, they will overcome the challenges. The kitchen with the farm-style table,  ceramic wine decanters, garlic, onion, pans and bowls radiates the warmth of this southern Italian family. That warmth coupled with Giuseppe Rotunno's stunning cinematography renders Rocco and his Brothers a timeless masterpiece. The film is three hours long, which gives you plenty of time to become immersed in the lives and struggles of the Parondi's.

"I hope one of us will be able to return to our land."

"Maybe you, Luca."
"I'd go back with you."
"Remember, Luca, ours is the land of olive trees, of moon sickness, and of rainbows."

Check out the trailer with english subtitles..