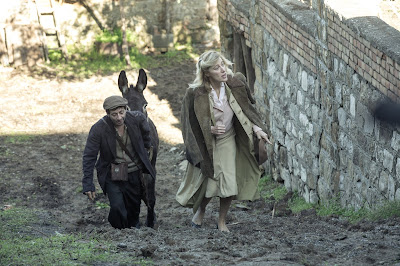 Aspromonte - La terra deli ultimi will premiere on July 2nd as a Special Event at the Taormina Film Festival in the ancient theater of Taormina. Written by Mimmo Calopresti with Monica Zapelli (writer of I Cento Passi) and with the collaboration of Fulvio Lucisano, the story is adapted from the book, Via all'Aspromonte, by Pietro Ciriaco.

The ensemble cast includes Valeria Bruni Tedeschi, Marcello Fonte, Francesco Colella, Marco Leonardi, Sergio Rubini and newcomer Francesco Grillo. Set in Africo, a small village perched in the Calabrian Aspromonte valley, the film is set in the late 1950s as a local woman dies during childbirth because the doctor fails to arrive on time due to the remoteness of the village. The men, exasperated by the state of abandonment, go to protest to the mayor. They get the promise of a doctor, but in the meantime, led by Peppe, they decide to unite and build a road themselves.

Click here for more information about the film. Click here to visit the Taormina Film Festival online.
at June 22, 2019