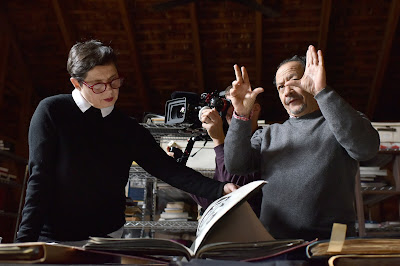 The lineup of the 35th Venice Critic’s Week 2020 has been revealed. Most interesting is the closing film- a documentary by Roberto Rossellini’s grandson, titled, “The Rossellinis.” According to Luce Cinecittà, Alessandro Rossellini is a recovering drug addict. “At the age of 56, he decides to take on the challenge, as well as to improve his precarious finances, by making this film, forcing everyone to undergo family therapy under the scrutiny of an unforgiving lens.”
Below is the complete line-up.

The Venice International Film Critics’ Week is an independent section of the Venice Film Festival, organized by the Union of Italian Film Critics (SNCCI). The program includes a selection of seven debut films in competition and two special events out of competition. The selection is curated by the General Delegate Giona A. Nazzaro with the members of the selection committee Paola Casella, Simone Emiliani, Beatrice Fiorentino and Roberto Manassero. It will take place from September 2 -12.

Meanwhile at the Venice Film Festival, it's been announced that the first film in the Restored Classics section will be "Don’t Look Now" (1973), a horror film masterpiece by British director Nicolas Roeg starring Julie Christie and Donald Sutherland. It will be introduced by director Luca Guadagnino. The original is available in the US on Amazon, iTunes, Vudu and YouTube. Click on the image to stream it on Amazon..