Now available on DVD.. Woody Allen's "To Rome with Love"... 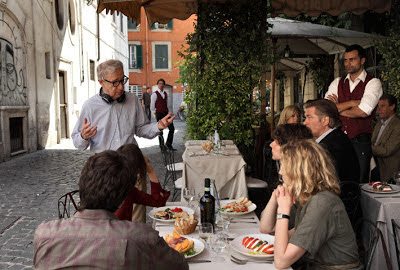 To Rome with Love... Not so loved by Romans

Woody Allen’s latest film, To Rome with Love features an ensemble cast with several different story lines that follow characters through the streets of the Eternal City. Roberto Benigni’s character deals with his sudden celebrity status while Alec Baldwin’s character retraces the steps of his youth and visits a lost love. Then there is Woody Allen’s character, who is trying to revive a former career and come out of retirement. Not to mention Penelope Cruz’s character, the flamboyant sex symbol who seduces the men of Rome. For audiences here on this side of the Atlantic, the film offers a fun, light-hearted trip to Rome via the big screen. However, that very depiction has audiences on the other side of the Atlantic up in arms. “Woody Allen’s film on my city? It’s not funny, in fact, it makes me cry. It shows a capital that does not exist. His is simply a work to promote tourism: he wanted to take a nice vacation and that’s it. It’s a Rome seen through the eyes of Americans, who when they travel to Rome hope to see it this way: fun-loving and simplistic locals, the monuments, you eat well. Instead Rome is a city full of problems, that I love dearly, that I hold dear to my heart, but it has become impossible.” Those harsh words come from one of Italy’s most respected filmmakers and Rome native, Carlo Verdone. 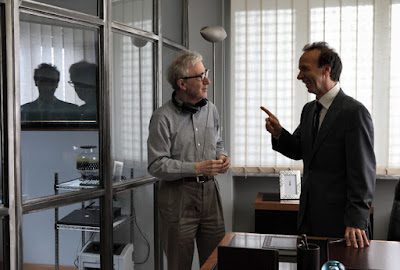 I saw this film twice; once in Rome dubbed in Italian, and the second time, here in New York in its original language. After reading Verdone’s review of the film, I find myself on both sides of the coin. The whole point of my career as a film critic of Italian cinema is to promote the new generation of Italian filmmakers and to dispel the stereotypes of Italy being the “Old Country” filled with frivolous inhabitants who sit around drinking cappuccino and eating spaghetti all day. To a certain extent, I share Verdone’s sentiments. However, he also has to realize that as Americans going on holiday in Rome, we don’t want to be bothered with its political problems. We have enough of our own political problems here in America, just as Italians visiting New York don’t want to be bothered with its issues such as the brutal traffic jams and a mayor who bans super-sized soda.

As far as I am concerned, the protagonist of Allen’s film is the Eternal City; its bustling streets, its ancient architecture, its art, its unique Roman pines, its eternal charm and endless beauty, and regardless of its political problems, you can not take that away from Rome. It is a strikingly beautiful place, and as a tourist myself, I have always found Romans to be very helpful. I rarely meet a Roman who does not speak English and whenever I have a question about their city or I’m looking for directions, they are happy to provide me with what I need. 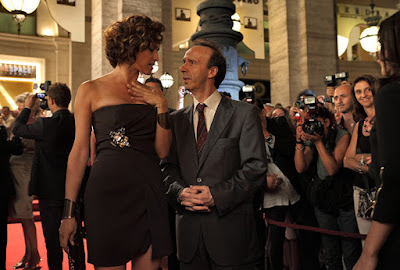 If I was to take offense to anything in Allen’s film, it would be the infidelity practiced by most of the Italian characters and the ease with which they cheated on their spouses. That element was actually a bit shocking to me. I have lived and worked in Rome. I have family and friends in Italy, and I have never known anyone who has such disrespect for the institution of marriage. However, it’s a fictional story, so I didn’t really put much into that aspect of the film. Overall, I walked away from this film happy to have spent an hour and a half looking at the beautiful sites of a city that I love so much. There were some hilarious moments of classic Woody Allen humor when I laughed so hard, I cried. However, I do appreciate and acknowledge Carlo Verdone’s criticisms, especially when he says that the film is a “work to promote tourism,” because after seeing this film, I cannot wait to get back to Rome. Even with all of its problems and corrupt politicians, for me, it is still the most beautiful place on earth.
at January 16, 2013 1 comment:

Sicily Through the Eyes and Heart of Emanuele Crialese

Emanuele Crialese is one of the most inventive and poetic filmmakers working today. The messages in his films speak to the dreams and desires within the soul, and their breathtaking cinematography reveals his inspiration and pride of a land to which he is deeply connected.

Born in Rome in 1965, Emanuele Crialese’s Sicilian roots are the driving force to the plots of his movies. Crialese earned his degree at New York University’s prestigious film school, Tisch School of the Arts.  He originally set out to take a short film course at the university but was granted a full scholarship after presenting a sample of his work. Much of Crialese’s career has been dedicated to exploring the plight of the immigrant, and the irony of this lies within the fact that while in New York City attending film school, he lived in a Lower East Side tenement, which was once occupied by immigrants during the immigration wave of the 20th century. One has to wonder if that experience has had any influence on his work today. Crialese made a number of short films during his years in New York, and then made his first feature in 1997. The film titled, Once We Were Strangers is about a Sicilian man living illegally in New York wandering from job to job when he falls in love with a local radio show host.  The story follows the lives of a number of immigrants living in New York including those from India. The film is about the culture clashes and expectations of immigrants coming to America in search of a better life.

Upon his return to Italy, Crialese made the visually stunning masterpiece, Respiro. Staring Valeria Golino and Vincenzo Amato, the film was shot on the Sicilian island of Lampedusa and tells the story of a not so traditional mother and wife who struggles with meeting the demands of a politically correct society in a village where everyone knows your business. It is a story of freedom, self-expression and love that was shot in a place as close to paradise as one can get. The film has been a huge international success perhaps due to its beautiful landscapes and timeless story.

Emanuele Crialese is such a relevant filmmaker today because his work shows the ideals of a country that is anchored in tradition while exploring the current issues of its modern inhabitants.  He does so in a unique way that captures the physical, magical and emotional aspects of Sicily’s Mediterranean beauty.
at January 13, 2013 No comments: