The 2017 Cannes Film Festival kicks off today. Although no Italian films were chosen to compete in the main competition, there is a strong Italian presence across the board. From Claudia Cardinale gracing the official poster to Monica Bellucci acting as Mistress of Ceremonies to Paolo Sorrentino's jury post to a restored version of Michelangelo Antonioni's Blow Up and the selection of films in other categories, there will be no shortage of Italian films for festival-goers to enjoy.
One film in particular that has caught my eye is a short film made by Emanuela Mascherini. Offline is the story of the perils of online dating and how the new form of social interaction is sometimes exploited or used irresponsibly. There are two versions- 16 minutes and 24 minutes. Mascherini will present the 24-minute version at the Cannes Short Film Corner.
Although she is young Mascherini has an impressive resume, which boasts her accomplishments in theater, commercials, television and filmmaking. She's also authored a number of books on a variety of subjects including poetry, cinema and life in general. We have been connected for years on social media and I have followed her interesting projects. After seeing previews for her latest endeavor, Offline, I contacted her for an interview. She speaks great English and was enthusiastic to talk about the film and her anticipated adventure at the Cannes Film Festival. She gave profound insight into our society's new way of communicating through social media and this type of 24-hour representation of ourselves and how in the end, we really don't know each other at all.
I think it’s great that you made this film, Offline, and told this story. I have my own interpretation.. but what exactly did you want to say?
The literature and cinema I love often proposes questions instead of finding answers, and that is what I try to do with my research. In this case, I wanted to focus on virtual relationships and the superficial and dangerous approch we have with that. It’s a transversal item, meaning that both the young boy (Domenico Diele) a digital native, and the woman (myself) pay at the end of the story for their behavior. Then I always have a particular interest in the female point-of-view, trying to avoid stereotypes. In this short, I also deal with the particular phase and feeling in the life of a woman in her thirties. Women begin in this phase to feel “old” and to be in crisis because of cultural influences, and this feeling also “influences” their behavior in different ways.

I liked the band of women in your cast. The 50-something, 30-something and 20-something.. Different ages and generations but similar challenges in today’s society. What are your thoughts on women today? I don’t see us supporting each other the way we should.. I am seeing a lot of competition among women and women that want to hurt each other rather than help each other. I don’t like it.
You noticed a very important aspect of the short film. The three women in the cast are a metaphor of the phases of a woman. Three different ages and similar interior conflict; between passion and family, love and work, other women, time passing. And also in the film, and in our society as you remark, there is not a real solidarity and comprehesion; rather a competition that I try to represent and you can see that develop. This is the fact, this is what we can feel around us, and if we see that on the screen maybe something can change in our thoughts.

I also appreciated the screenplay. There is a perfect balance of key dialogue that moves the story forward.. and also strong silences which reveal the torment of the characters. What was your process of writing and developing these characters? Since it is a short film, you did not have much time to develop them, but the mix of a great script and powerful performances resulted in strong characters that I felt I knew by the end of both the 16 and 24-minute versions. How did you achieve that?
This project began long ago: 6 years. It really changed with time and changed with me and my point-of-view. I had the first idea while I was finishing my previous short film Nerofuori (2007) with Francesco Baccini. The main characters were a man in his 50’s and a girl (me). I wondered what would happen if I switched the characters in the story, if a woman in her 30’s met a younger man. Then I added the theme of virtual relationships to this idea. I wrote the first draft with Alessio Venturini, and after few years, I added two revisions of the script first with Andrea Agnello and finally with Francesco Cenni. But for me, being also and first of all an actress, it’s very very important to work with the actors, and it was during rehearsals and on the set that we really reached the final version of the film. I achieved the result you spoke about, but every step was really essential to me. I also changed some things during editing. You continue to write a film until it is on the screen and every person who worked with me with such talent and generosity is responsible for the result: my wonderful producer, writers, AD, DOP, cast, crew, authors of the music, editor, post production people.

In presenting the film, have you noticed differences in gender reaction? Do the men react differently than the women? I’m sure this film has opened the door to some great conversations.
Well, there is not a real gender difference in reactions, but the discussions this short film has opened are really rich. The thing I like the most during the discussions is that no one judges the characters. This was one of my prior aims while shooting this story. 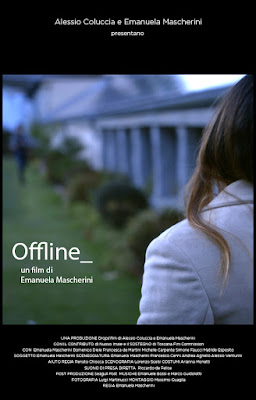 With social media and all these camera devices, do you feel there is pressure for women to engage in this type of activity? It was obvious that it went against the better judgement of your character, Aurora. She was not comfortable but did it out of peer pressure to please Nicolas.
There is pressure for everybody. Our society with the internet has totally changed our way of communicating and being in relationships and this refers to every kind of relationship. I’m speaking also about the working world. The non-native internet generation had more problems (adjusting) but this is not the real problematic aspect. We have an oversized request of representation of ourselves and in this daily “storytelling” of us, we often don’t recognize the gap between reality and virtual “fiction” anymore. We are in contact 24 hours a day but it turns out that in the end, you don’t know at all the real person communicating with you. To be out of this way of communicating is impossible nowadays. For example, if you consider that as a verification of many sites, they ask you about your Facebook profile.  What we can do is to take care of what we share, because once you have shared it, it's not yours at all anymore.

Were you influenced at all by the story of Tiziana Cantone, the girl in Naples that committed suicide after her boyfriend had recorded the two of them, and then was bullied online? It was such a sad story and makes me scared for the young women of today and the future.
No, I wrote the script before the story in Naples and other similar stories. These tragedies are proof of the danger of virtual relationships and social networks. And after these tragedies happened, I wondered before shooting if I had to focus on these extreme consequences of bad use of the internet. But my answer to myself was that I should not because there is nothing we can do after they happen. I want to focus on the shallow approach we have on the medias and what moves us to this kind of approach, because that is something we can change, while about the consequences there's not much we can do. That's why I don't want to talk about that for now. If we concentrate on the approach and on communicating this attention to the new generation we can change our attitude towards media and prevent dangerous consequences.

Tell me about the Cannes screening coming up..
It’s really exciting for me to be in Cannes for the festival. It’s my first time as a director at the Short Film Corner. I’d like to find an international distributor for Offline. This would be the aim. For the rest of the festival of Cannes, for me it will be like the “land of games” so I think it’s a great occasion to be there, to meet talented colleagues and to see films coming from all over the world that I would never have the opportunity to see in Italy.

For more information on Emanuela Mascherini, click here to visit her website. The Cannes Film Festival runs May 17 - 24. Click here to see the Italian filmmakers that will be participating this year.