Celebrities Step Up for Child Refugees 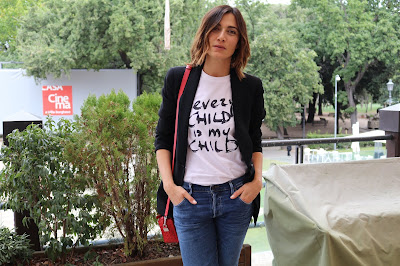 With the news of another refugee child found dead today in the waters of the Mediterranean, humanitarian efforts are needed and appreciated more than ever. One movement that is contributing to children throughout the world, especially those affected by the Syrian War, is Every Child is My Child, an association that began shortly after the bombing of a children’s hospital in Aleppo. The association is run by a group of Italian celebrities, which include Anna Foglietta, Edoardo Leo, Veronica De Laurentiis, Marco Bonini, Paola Cortellesi, Valerio Mastandrea and many others. The goal is to bring attention to the plight of children not only in Syria but across the world as they have become refugees and try to integrate into the culture of different countries.

Actors Andrea Bosca and Anna Foglietta participated in a press conference to talk about the movement at the Casa del Cinema in Rome. There, I asked them about the latest mission of Every Child is My Child. Foglietta explained, “This year, we are concentrating on the children of Syria because we feel they are in emergency. We are looking for a way to sensitize people, especially the children. We visit schools and talk about how beautiful With the news that bombs are being dropped on integration is, how important it is to be grateful for what is right and to commit ourselves to defending children against the brutality of war, the poverty caused by war and also the cultural poverty."

Andrea Bosca spoke about the movement's support of Onlus/ONG,  organizations committed to defending the rights of women and children throughout the world. There has been a lot of talk about them in recent weeks due to the ongoing refugee debate in Italy.

"Every Child is my Child is a mission. It’s a group of artists who came together on a social network and then we have the mission of supporting children all over the world with very concrete and precise missions. We support ONLUS or ONG with their specific projects because of the wellness of the children in the world. It's started when the Syrian attack on a hospital killed a lot of people, especially children. That was the spark of the movement. And right now, we organize as an association with the website, which www.everychildismychild.it. So, people can donate, follow our shows, our books because we sell books, also."