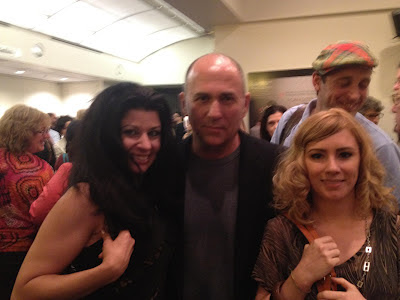 Director, Daniele Vicari attended the festival to present his film, "Diaz: Don't Clean Up This Blood." The story is based on actual events that happened in Genoa during the 2001 G8 Summit. The story focuses on the controversial police raid of a temporary shelter for international protesters. Everything had reportedly been calm and quiet at the shelter that night in 2001, so there was no apparent reason for the violent raid to take place. It was a deeply troubling event that has been described as the greatest human rights tragedy since World War II, and more than a decade later, it continues to be a hot topic in Italian politics.

In a continued sign of the times, the theme of immigration was alive and well at this year's Open Roads festival with three films each telling different stories and points of view on immigration in Italy. Guido Lombardi's "Là-bas: A Criminal Education" is a sometimes dark journey into the world of African immigrants living in Naples, and they way in which they struggle to make ends meet whether legal or illegal.

At the other end of the spectrum is Andrea Segre's "Shun Li and the Poet," a more peaceful story of a Chinese immigrant and an older Slavic fisherman who strike up a friendship. The film illustrates the parallels in the diverse paths of two immigrants who are each making a new life for themselves in the Veneto region of contemporary Italy.

Now let's return to Ozpetek's latest masterpiece, "Magnifica Presenza" (Magnificent Presence). It seems that with every new film, he reinvents himself. Each plot is so different from the last. However there are always signature Ozpetek ingredients such as his culinary fascination. His perfectly quaffed characters are always preparing and enjoying beautifully colorful and decadent creations. This practice was of course embraced in "Magnifica Presenza" with the characters' elegance matching that of the culinary creations and sparkling candles placed upon the impeccably set dinner table. The musical scores of his films are often at the forefront, intensifying the scenes and inviting the audience to escape into his world of decadence and fantasy. That was certainly the case with the plot of this story, which takes us back in time as we watch the mystery behind the death of a 1940s acting troupe unfold.

Regarding international distribution of these films, this article has been updated with links to the films available for streaming. Click on the title.