Inside the Vatican: Revisiting Nanni Moretti's Habemus Papam (We Have a Pope) 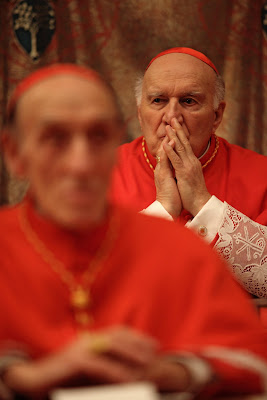 It's labeled a comedy but it's really a reflection on the human condition and spirit, and how events of the past affect how we deal with the present.

Nanni Moretti's film "Habemus Papam" (WeHave a Pope) recently made its way to American shores. The story centers on a newly elected pope who really doesn't want the job. When Cardinal Melville is unexpectedly chosen by his peers to lead the Catholic Church, the enormous responsibility brings to the surface old disappointments and dreams that were never realized. Just as he is about to step onto the world's stage to address his followers, the Pope has a panic attack and literally gets out of dodge. A renowned psychiatrist, played by Nanni Moretti, is called in to assess the situation and consult with the pope. The film opens with archival footage of the Vatican's funeral for Pope John Paul II and then follows the cardinals into conclave as they ponder their choices for a new spiritual leader, opting for a compatriot who wasn't originally in the running.

Nanni Moretti did well to cast Michel Piccoli in the role of the reluctant pope. Piccoli uses his expressive eyes to communicate the pontiff's inner struggles with his past and conflicts with the future. You can see the pain in his eyes as he wants so much to lead his global congregation but just can't muster the strength to do so. In an effort to find some peace, he manages to break free of the Vatican walls to do some soul searching. As the pope is working out his issues, the cardinals are still officially in conclave. So to pass the time, the pope's psychoanalyst organizes an international volleyball tournament. The cardinals throw themselves into their matches with both fierce competitiveness and childlike joy, qualities rarely associated with the upper echelon of the Catholic Church. It is a beautifully directed scene complete with playful music and dramatic slow-motion sequences that reveal a human side to some of the world's most powerful men.

Meanwhile, the pope walks the bustling streets of the Eternal City with a heavy heart and a mind full of thoughts. During his brief stint of total freedom, he taps into the childhood issue that is holding him back, and just as we think he is about to set the past to rest, the film takes a totally surprising final turn. 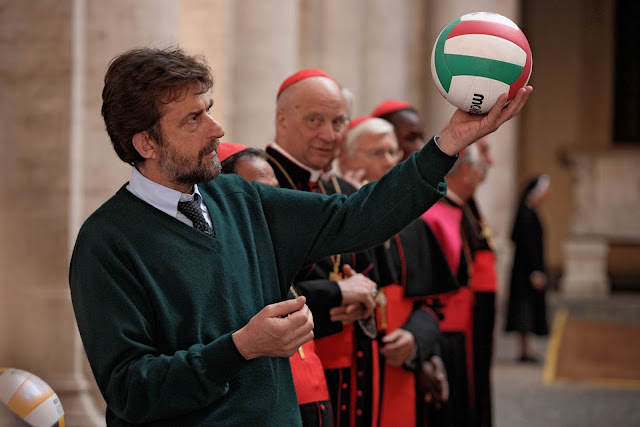 With sharp dialogue and Moretti's signature style of filmmaking, longtime fans of the filmmaker will appreciate this film as another Moretti classic and embrace his delicate art of interweaving comedy and drama to create a touching portrait of reality while finding humor in the face of sadness and grief. The film has already been recognized for its rich design and sumptuous sets.  Many scenes were shot at the sprawling Roman Palazzo Farnese, which is home to the French Embassy in Rome as well as the magnificent Villa Medici, while the Sistine Chapel and the Sala Regia were reconstructed in the Cinecittà Studios.

Stream the film now on Amazon..

Nanni Moretti is one of the most prominent and important figures in Italian pop culture and contemporary Italian cinema. Known for pushing the envelope in matters of relationships and family, Moretti's films tug at our heart strings with storylines centering on the connections between parents and children often exploring the effects of loss and grief.

Born in 1953, Moretti grew up with two passions; cinema and water polo. Upon graduating college, he made two successful short films which served as a solid platform for his prolific career in feature filmmaking. In most cases, he works as the producer, director, writer and lead actor. His love of water polo inspired his 1989 film, "Palombella Rossa." It is obvious how important the water element is to Moretti and his work. In addition to "Palombella Rossa" the sea has also served as a movie set for story-changing scenes in several of his films including "The Son's Room" and "Quiet Chaos."

Aside from filmmaking, Moretti is known for his outspoken political beliefs and has led many left-wing rallies in protest of Italy's controversial prime minister, Silvio Berlusconi. Much of Moretti's criticism lies within the current state of the Italian media, given Berlusconi's control of the state television stations as prime minister, as well as his broadcast empire, Mediaset. His 2006 "Il Caimano" was based on the life of Berlusconi. Moretti also portrayed by him in the movie.

A few of my favorites...

"Caro Diario"  (Dear Diary)
Nanni Moretti's 1993 film, "Caro Diario" is great reminder of the magic of cinema.  With stunning cinematography and quirky characters, this film will take you on a trip through Italy and make you laugh all the way. Moretti is hilarious as he directs himself through a series of vignettes in which he is in search of that eternal question, What is the meaning of life? With scenic shots of Stromboli as well as modern Rome that are fit for a travelogue, Moretti gives us a tour via his Vespa of modern architecture in the Roman suburb, Garbatella. It is definitely a neighborhood less traveled by tourists but still beautiful with it's local charm and simple structures. This is a feel-good movie that has become a contemporary classic in Italy.

"La Stanza del Figlo" (The Son’s Room)
Nanni Moretti’s 2001 masterpiece is a thoughtful, dramatic film that explores how one family copes with the loss of a child. Moretti wrote, directed and co-stared in the film with the sensational Laura Morante. The film is profoundly sad at times. However, the ever-versatile Stefano Accorsi is on hand to offer some priceless comedy relief. Given the tragedy of the story, Moretti succeeds in focusing on the positive side of grief; the ability to move on while remembering your loved one.

"Il Caimano"
Nanni Moretti embraces his passion for politics as he takes on the hot topic issues of Italian Prime Minister, Silvio Berlusconi. The story centers on a down-on-his-luck producer named Bruno Bonomo, who is brilliantly played by actor, Silvio Orlando. Bonomo is pitching a script to Italian television, which is based on the life and work of Berlusconi. The film has a documentary feel, and although the story is fictional, Moretti makes sure to inform his audience of the media tycoon and prime minister's rise to fame and fortune. With actual footage of Berlusconi, the film is a thought-provoking portrait of a businessman and politician whose well-earned controversy is still at the heart of heated debates.

"Caos calmo" (Quiet Chaos)
Its steamy scenes between Nanni Moretti and Isabella Ferrari created an unprecedented buzz among festival goers at the 2007 Tribeca Film Festival where the film made its US premiere. Moretti's character Pietro is a widower who spends his days mourning on a bench in front of his daughter's elementary school. As time passes, he gets to know all the regular passers-by. Even his colleagues conduct business meetings with him at this designated park bench. His love affair with Eleonora (Ferrari) is born out of life-changing events at the beginning of the film. This movie is a profound example of the cause and effect of the choices that we make in life.