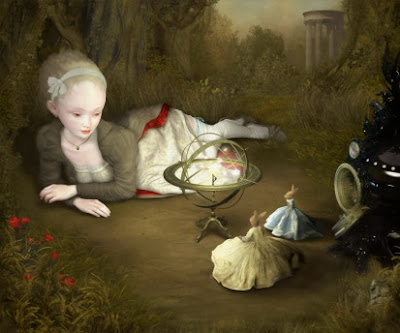 Dorothy Circus Gallery opened its 2014 schedule with the long-awaited solo exhibition by Ray Caesar titled, “The Trouble with Angels”. The exhibition opened last week at the Dorothy Circus Gallery in Rome, where it will be on display until April 6th 2014. Alongside with new artworks in edition of 20, made ​​specifically for the gallery that represents him exclusively for Italy, will be displayed also 5 brand new unique edition pieces, the renowned single varnished collected by Madonna and other great collectors.

The 18 works on display, including editions and unique editions, will create a rich overview of the dreamlike, enigmatic and seductive universe of Ray Caesar, who for years amazed us for the richness of his imagination, full of renovated psychic scenarios and technically stunning details. As a skilled tailor, Caesar dresses his angels of seductive harmonies, inspired by the memory of his times and of his personal desire, sewing puzzles and mysterious symbols among defined details of his artworks so that we are assaulted by new questions and suggestions. What is coming out from the thoughts of the “Etudiante”? What happens the day after yesterday? And why was the lovely creature in the carriage left nearby the sea? Art opens the doors of our perception, confirming its immense evocative power, which once again is used by Ray Caesar to interpret and fulfill our desires, first of all, the desire to escape and to visualize a possible journey of the mind, which brings us through familiar and reassuring places, and at the same time deep into the secrets and dark corners of our mind. Ray Caesar’s Time and Space draw us like a magnet, the vibration of technology belongs to us, the rich imagery of quotations, from Watteau to Boldini, does not relive the past, but it makes the past contemporary and present.

The works in the exhibition will be published in the third volume of the annual catalog of Dorothy Circus Gallery titled “The Doors of Perception” coming out on September 2014. The first and the second volumes of Dorothy Circus Gallery’s Trilogy “Once Upon a Time” and “Walk on the Wild Side” featuring the 2011 exhibition by Ray Caesar “Would You Be My Miracle?” were previously published.