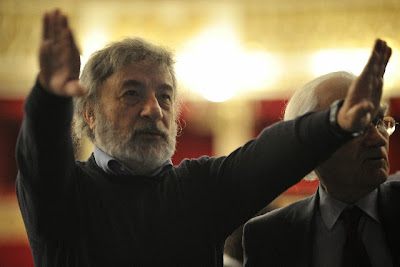 The films of this year’s edition of Open Roads: New Italian Cinema, the annual film series hosted by the Film Society of Lincoln Center in New York, reflect a country in crisis. Italians are facing unprecedented economic challenges right now with the loss of jobs and a political infrastructure lacking the stability needed to get the country back on track.

Each director featured in the Open Roads festival communicates that crisis in a uniquely different way; some with comedy, some with anger and resentment, and others with humble characters who will do just about anything to put food on the table. This brings me to veteran director, Gianni Amelio, and what a class act. I had the pleasure of talking with Amelio while he was in New York promoting two films included in this year’s edition of Open Roads- a documentary titled, "Happy to be Different," which explores gay life in Italy after the fall of fascism through the early '80s and "L’intrepido," the story of an everyday man just trying to make ends meet during Italy’s unemployment crisis.

Born in Calabria in 1945, Amelio’s career spans five decades with a body of work that speaks strongly to the cultural diversity of southern Italy and the relations between different generations of immigrants and natives living side by side. Amelio’s 1994 film, "L’America" was a huge international hit and had a successful run in the United States. "L'America" is a symbolic story, which takes place in poverty stricken Albania after the fall of its communist government. Enrico Lo Verso stars in the film alongside Michele Placido as Italian swindlers trying to make money from rebuilding the infrastructure of a collapsed country. Harsh circumstances and the tough reality of poverty lead to a spiritual transformation for the corrupt pair as they experience the sadness and desperation of a culture trying desperately to recover. The film is presented in the style of a documentary, and the symbolism for the title of "America" is revealed at the end of the film as we watch a ship full of immigrants leave the shores of Albania and head across the Adriatic Sea to the "Promised Land". The heartfelt performances by Lo Verso and Placido reveal the talent and unique vision of Gianni Amelio.

Before meeting Amelio, I imagined that he would be an intellectual character of few words. However, he is not like that at all. He was friendly and humble as he talked with me about his films with the enthusiasm and pride of a man who simply loves what he does and is grateful for the chance to live his dream. He genuinely loves talking about his work and sharing his inspiration with others.

How has growing up in the south of Italy influenced you as a filmmaker; the stories you tell and the way in which you tell them?

There are two aspects. First, when you grow up in a small town, a small province, you are always looking for an escape whether it’s through music, movies, literature or through culture in general; all the things that come from outside. The first influence is something you never forget and for me, the top influence, even if you don’t really see it in my work, is American movies from the 1950s and '60s. To capture the second aspect, I would like to quote a line from one of my last films, "The First Man," where the son asks the mother, “Mom, who are the poor people?” and the mother answers, “We are.” I lived during a historic period in a region where everyone was poor, and this was my great school of life, and is the basis for what I did. It gave me the push to be here doing the work that I do and to realize this dream that might have seemed impossible.

L’America was very successful in the United States. What inspired you to tell that particular story of immigration and compare it to immigrants arriving in America?
The inspiration was my life, my family, my father, what happened to my father’s father. I come from a family of immigrants. My grandfather, my uncles and also my father immigrated to Argentina. My father stayed there for 15 or 16 years, and when, about 20 years ago, the Albanians came to Italy, I saw or I imagined that I saw the Italians immigrating to the Americas. The last scene of the film, where the elderly actor is on the boat with the other immigrants and says to them, “I’m tired but wake me up when we get to New York” because the ship that is filled with Albanians, he believes is traveling to the United States. I’d like to add a personal note. When I was location scouting, I met this Albanian family and I adopted a boy. I adopted him as my son. Since then, he is now married and has given my three grandchildren, and in a certain sense, the circle is closed.

So the making of this movie brought you a son, and brought this boy a family. Tell me about this boy and how his life turned out after you adopted him.
Yes, this experience was born directly from this film. His name is Luan Amelio. He’s now 38 years old. He’s gone on to a career in cinema as a cameraman, and he’s well known. He’s got a good career and he has made important films. For example, he’s worked on La grande bellezza and also on five other Sorrentino’s films, and is actually working with him now on his new project.

Most of the films in this edition of Open Roads reflect the current economic crisis facing Italians. Your film, "L’intrepido," is the story of a humble man, played by Antonio Albanese, who lives a tough life going from job to job as a temp, and is always in search of more work. Why did you choose to reflect Italy’s economic crisis with this story?

I think the crisis in this particular moment in history is so deep and so grave that it can only be addressed through sarcasm and through an attitude of rejection. It’s like when someone doesn’t believe in reality because you don’t want it to be true. So, I try to stylize these things that I show, and I was inspired by silent movies like, "The Little Tramp" by Charlie Chaplin. I was also inspired by Buster Keaton, who usually portrayed losers. But every time those characters fall down, they get up, dust themselves off and they’re ready to go at it again tomorrow. I think that every time I shot a piece of reality, I also wanted that piece of reality to seem like a dream, as something that wasn’t completely true or something for which there was never a solution, even an imaginary solution. It’s something that I, as a human being more than as a director, wanted to happen. So, I allow it to happen despite all the obstacles.

Gianni Amelio explores the space between reality and imagination. The lives of his characters are tough and their roads are challenging and full of obstacles, so dreaming is often a method of survival. Several of Amelio’s films are available stateside through Amazon, including "L’America."
at June 13, 2014