On Day 6 of our series, 7 Days - 7 Women, in which we are profiling seven strong, talented women working as filmmakers, writers or visual artists, we talk with actress, Sabrina Impacciatore about the versatility of her career.

Whether she's playing a devoted mother trying to protect her child, Jesus Christ's "Veronica" in Mel Gibson's controversial film, "Passion of the Christ" or a young woman coming of age, Impacciatore escapes into the life and mind of each character she takes on, sometimes so deeply that she believes she is actually them.  It's a fine line between reality and fiction, but Impacciatore treads it carefully and anyone watching her performance benefits from her emotional connection with the character that she becomes.

I spoke with Impacciatore at the Open Roads: New Italian Film Festival in New York City. So I thought in honor of that pondering question, I would revisit our interview. We talked about her lifelong dream of becoming an actress and she also gave me some insight into the differences between Italian cinema and American cinema.  Having worked with top directors on both sides of the Atlantic, she has firsthand knowledge of the topic.

Did you grow up wanting to be an actress?
Always! I was 4 years old when I realized that I wanted to be an actress, but then when I grew up, I thought that I wasn't beautiful enough, I wasn't good enough. So I started to go against this dream by studying other stuff like marketing and advertising but at the same time, I started to study acting. I thought, 'This is going to be my hobby.' I'm never going to make a career out of it. So I did other things, and I worked behind the scenes in television.  I assisted in writing scripts, and then I was asked to audition with the material that I wrote. I was scared but one day, I just felt in my stomach that I had to try because that was my dream and I thought that if I didn't try, I would regret it and be unhappy for the rest of my life, and now I'm so happy to be living my dream.

You had a key role in "L'Ultimo Bacio" one of the most successful films in Italian cinematic history.  Tell me about the professional road you traveled to get an opportunity like that.
Well I started very young. I was 16 when I began working in theatre. Then shortly after, came television shows. I discovered that I could write comedy, so I auditioned for a tv show and started to work as a comedian in television.  I did that for eight or nine years, but then I started to feel like I was in a cage and I wanted to change because even though being a comic is really nice, you get tired of it and you want to do something else, you want to explore.  In Italy, they have the tendency to give you a definition and it's very difficult to get out of that sort of stereotype. Then, finally a director, Ettore Scola, who was a master of Italian cinema in the 60s, saw me on stage and asked me to audition for his film, "Concorrenza sleale." I got the part and made my first movie in 2000 with Gérard Depardieu, and then like one month later, Gabriele Muccino called me for an audition and I made "L'Ultimo Bacio" with him.  It was just my second movie, but it's the movie that changed my life.  It was very successful.  So I decided not to work in television anymore because at that moment, Italian directors were pretty snobbish against tv actors.  I said no to television and I started to work only on feature films.  In my latest movie, "Baciami Ancora," the sequel to "L'Ultimo Bacio," it feels weird to go back to those characters after 10 years. Gabriele Muccino came to America to shoot two movies with Will Smith, "The Pursuit of Happiness" and "Seven Pounds," and we thought that we would never work with him again because we thought, 'Ok now he's gone to Hollywood and he's never going to come back,' but when he did, we were so happy. 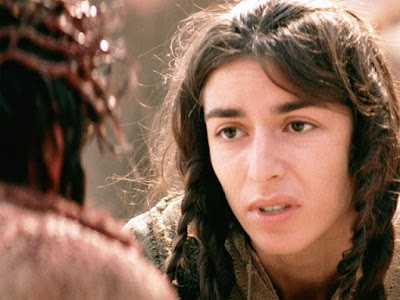 You played the role of Veronica in "The Passion of the Christ."  What was it like to work with Mel Gibson?
I completely fell in love with Mel Gibson because I like the fact that on the set, he is like a little kid.  For example, when he explained to the actors how to fall because Christ fell seven times, Mel Gibson took the cross on his shoulders and he literally fell down.  He did everything with so much passion.  He was so focused every second on what he wanted.  He was so inspired.  On the set, there was this incredible atmosphere.  Instead of acting, I felt like I was living that experience.  I believed that he was Jesus Christ and I was Veronica.  I know that sounds crazy.  It is crazy!  However, when I saw the movie and I saw my scenes, I realized that I was indeed living an experience, not just acting.  That makes such a difference because as an actress, I do this job to escape from reality, to escape from my life and I want to take a trip, and I accomplished all of that with Mel Gibson in another dimension, and this gives value to my work.

How do you think Italian cinema differs from American cinema, since you have worked on both sides?
Well, American cinema is for dreaming and Italian cinema is for looking at reality. American cinema is a huge industry. In Italy, we don't have much money and the government doesn't help us.  They continue to cut financing for cinema. Aside from money, here in America, you have really great artists like Martin Scorsese, Tim Burton, Paul Thomas Anderson, David Lynch and many others.  It's just another world. With American cinema, you can really let yourself dream. A director can have the freedom to imagine something out of this world, like with James Cameron.  In Italy, directors can't really dream. They have to think about how much money they have.  So the dream is smaller. You can't dream big if you don't have big money.

What are the roles being offered to women in Italy right now?  Are they interesting characters?
No not really, to be honest. I think it's because in most cases, men are writing about women and creating these female characters, and men just can't understand how complex a woman is, so they are writing these supporting roles, like the mother or wife of the main character. It's rare to find a good, complex, well-rounded female character, and this is something that we actresses suffer from. There are so few roles and it's difficult to find the main role interesting as a woman. And it's also difficult to find roles that are both dramatic and funny at the same time. This is usually just reserved for men, whereas an actress can play a very beautiful woman but not a woman who can go back and forth between comedy and drama the way life actually plays out. In the 60s there were these wonderful roles played by actresses like Monica Vitti, Anna Magnani and Mariangela Melato. They were more interesting. Now, there are only some exceptions.  Sometimes you find a role like that, but it's really rare. It happens once every two or three years.

What is your dream?
My dream is to spend my entire life being an actress, and my dream is to become one of the best Italian actresses ever!  I don't care about money or being recognized or being popular.  That is all secondary. To me, what is important and what gives me joy and happiness is to simply play a character.
at November 10, 2014