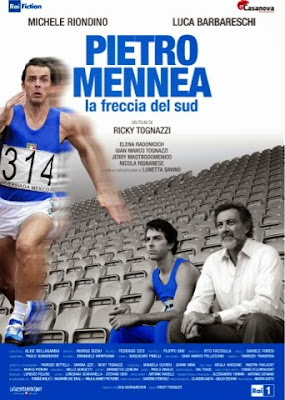 Directed by Ricky Tognazzi, "Pietro Mennea - La Freccia del Sud" is the biographical story of athlete-turned-politician, Pietro Mennea, also known as "La freccia del sud" (Arrow of the South) for his remarkable speed as an Olympic sprinter, in particular, the 200 meter in which he held the world record for almost 17 years. His record time of 19.72 seconds, set in September of 1979, is still the European record.

"Si lo so non posso cambiarlo il mondo, però ci devo pensare" - I know that I can't change the world but I have to think that I can.-  Throughout the span of his multi-faceted career as an athlete, lawyer, sports agent and member of the European Parliament from 1999 to 2004, Mennea was known for his staunch values ​​and ethics. In his film, Tognazzi paints a portrait of this "Arrow of the South" as a somewhat stubborn, tenacious man with unyielding commitment, willing to make the necessary sacrifices to be the best that he could be, always seeing the glass half-full, and always looking forward to the next adventure and challenge.

Tognazzi's diverse cast includes veteran actors like his brother, Gian Marco Tognazzi as well as rising stars, Michele Connena and Elena Radonicich. American film festival buffs may recognize Vito Facciolla of recent "Anime nere" fame. In the title role is Michele Riondino, a beloved Pugliese character actor known in Italy for his work on the big and small screen, including Marco Bellocchio's "Bella addormentata" and one of my personal guilty pleasures, the Italian soap opera, "Incantessimo."

The series is scheduled to air in the United States on RAI International April 3 and 4. For more information, visit RAI Uno's blog at.. http://rumors.blog.rai.it/2015/03/23/in-arrivo-su-rai1-pietro-mennea-la-freccia-del-sud/