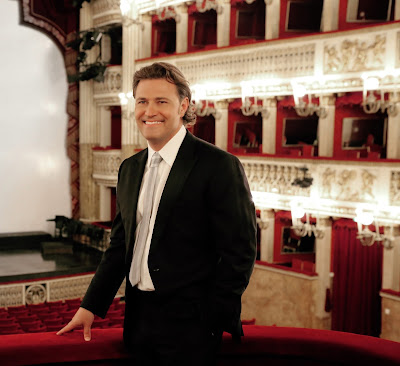 If you don't know him yet, meet Pasquale Esposito. Born and raised in Naples, Italy, he has been singing and performing for nearly his entire life. It all started when he was just 7 years old and joined a local church choir. The pastor of the church saw a special talent in Esposito and soon became his mentor, fostering that talent and guiding him towards a life in music. He spent his adolescence performing in small clubs around Naples, studying music and taking vocal lessons from renowned coaches in the southern Italian city. When he was in his early 20's, he left his country to pursue a career in America. It was not an easy road and success didn't come overnight. Esposito had to deal with the language barrier and nostalgic moments of missing his family. He persevered through those tough times and turned that nostalgia and his struggles into poignant songs and stories that he now shares with his fans.

I caught up with Pasquale Esposito during a concert in Rochester, New York. We covered so much in our short time together. He made an analogy between the streets of Naples and the set of a movie that perhaps only a native could appreciate. He talked about his favorite motion picture soundtrack, the artists who have influenced his career and most of all, his Neapolitan pride.

Which artists have have influenced your career?
I find inspiration in people like Claudio Baglioni. I find lots of inspiration in Massimo Ranieri. He's an artist that I really respect for the fact that he's a great dancer, a great actor and a great singer. He is someone that I really admire.


Do you think that being from Naples brings something special to your talent and the way you express yourself?
Definitely. I was very impressed by a movie by John Turturro called, "Passione". You can see how the suffering and the sarcasm of that city reflects in the personalities of the people who are there. I was talking with an old gentleman there and he was saying that it's in the water. It's in what we drink, it's in the coffee, it's in the pizza and it's almost like a drug that's inside of every single person. If you walk through the streets of Naples, you will see that it's a theater. It's unbelievable. You will walk and you will see people doing simple things but it becomes a scene. It becomes acting, it becomes singing. So there is art in everything.  Going back to your question, if you ask me, what do you have? I don't know what I have but I can tell you that there is something inside that we bring just because we were born there.  It's the Vesuvio, it's the sea.. It's an amazing energy that I carry with me on the stage and I will never forget my roots. Thank God that if I'm doing ok, it's because of my roots.
Have you ever considered doing music for film?  What do you think of composers like Ennio Morricone?
Well Ennio Morricone is the master of interpreting what you see on the screen and putting that to music. There is no question about that. But I would love to do music for film. Music should reinforce the message that the director is trying to give. That is what I look for when I see something on the screen. The music should be supporting what I am looking at.


﻿﻿Do you have a favorite movie where you feel the music is really supporting the images and story?
"La Dolce Vita". It is something that really inspires me, something that you can just close your eyes and listen to the string section.

Do you write your own music?
I write my own compositions, yes, and of course we do many covers. I love opera and I studied opera so my range is pretty wide. That's why my label always gets a little upset with me because I cannot focus and stick to one genre. I love jazz. I love opera. I love rock. So you will get a feeling of everything combined. On the other hand, I stay attached to my roots- and Neapolitan music is what I believe to express the best.
﻿
The quality I appreciate the most about Esposito's work is the connection he has to the lyrics of his songs and how they express his life, from his dream of exploring the world and finding his place in it to making that leap of faith in leaving home to the struggles along the way to the joy he has found in his success. That's why his music is so rich and so full of passion; because he has lived and experienced the words that he sings. His songs are like short films in themselves. His lyrics detail the emotions that one experiences in taking such a huge leap of faith. If I had to choose a favorite song on the cd, it would have to be "Addo' Stong' Io" from his cd titled, "A Brand New Me".  There is one particular part that I can identify with. The song is dedicated to his family and his memories of home after he left and was living in America. He recalls "the smell of my house, a little balcony with flowers and roses, a Sunday made of Church."  When I was 24-years-old, I was working for CNN and was assigned to the Rome bureau for six months  It was the first time that I was ever in Italy. Visiting the land of my origins was a dream come true and I was forever changed by the experience. However, I can remember those Sundays wandering around Rome watching families in church, walking through the neigborhoods. I could smell sauce cooking, I could hear the animated voices of family members echoing through the windows and streets, and although I had friends in Rome, sometimes I just wanted my family on a Sunday. So, I truly appreciate what he was feeling.

Although his music arrangements and voice are so deeply rich and powerful, the sincerity of his lyrics is at the core of his songs and his talent for performing them through his singing and music bring the songs full circle, making them elaborate works of art. You can see Pasquale Esposito's work on YouTube and also by checking out his website at www.pasqualeesposito.com. He often performs live, and there you can check out his upcoming dates. He is also on Facebook and updates his fan page frequently.