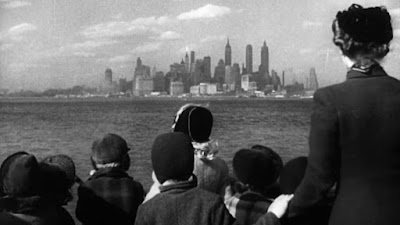 The power of movies has proven itself time and time again throughout history. Cinema often mirrors the plights of society or recounts life-changing events. Such is the case with Peter Miller's new documentary film, "Projections of America."
My first encounter with Miller happened in 2006 when I reviewed his beautiful documentary, "Sacco and Vanzetti", the heartbreaking story of two Italian immigrants executed for a crime they unlikely committed. Since then, I have remained in contact with Miller on social media. I saw that he was promoting his most recent film, so I had an idea to help him out with a follow-up piece to "Sacco and Vanzetti". Having no idea there was an Italian connection, I soon discovered there was one indeed. 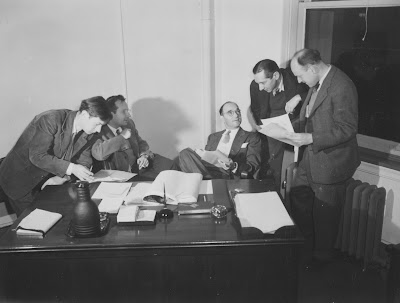 "Projections of America" recounts a period in American history immediately following World War II when Hollywood was called upon by the U.S. government to assist in a PR campaign that would put America in a positive light throughout the world. Robert Riskin, the screenwriter of many of Frank Capra’s blockbusters, was put in charge of writing a series of these propaganda films that would be shown to newly liberated countries. After the fall of Mussolini, Italians were presented with a film from this series featuring the famous ex-patriot, conductor Arturo Toscanini.

I really enjoyed this film, so much so that I ended up watching it three times. The first time, I was so impressed by the production quality and blown away by the editing, I missed some of the story. The second time, I just listened and learned about these historic films, which I never knew existed and the third time, I zeroed in on the film shown in Italy. I talked with the director Peter Miller about "Projections of America". He told about his very talented editor, Amy Linton, and the process that goes into making such a beautiful, compelling film.
First, just a curiosity about the production process because I really enjoyed the overall creativity of the film, especially the editing with the soft dissolves.. and the audio mixing with the music, narration and letter-reading. It was really a joy to watch. What is your process of putting a documentary like this together? Where is your starting point? Then, where do you go from there? Do you use storyboards? I’m curious because the structure of this film is very organized and the story smoothly flows both visually and editorially from one scene to the next.
Documentaries find their poetry in the editing room. I’ve been fortunate to have a long, fantastic relationship with the brilliant film editor Amy Linton, who has collaborated with me on five films, including "The Internationale," "Sacco and Vanzetti," "Jews and Baseball," "AKA Doc Pomus" and now "Projections of America." When I’m shooting a film, I’m always thinking about how it will be woven together when we edit. My films are a process of discovery and I don’t map them out ahead of time on storyboards, but I’m always thinking about how the stories I discover will fit together as a dramatic narrative. A documentary may be about an important historical event — like the WWII propaganda film project that’s at the heart of "Projections of America" — but at the core of any effective non-fiction film a story of human beings, with all of the emotion and drama that makes real life — and the movies — so compelling. I found the "Projections of America" films fascinating as a subject, but what really grabbed my imagination were the story’s protagonists, the filmmakers who created the films, the audiences who were moved by them, and especially our central character, Robert Riskin, the Academy Award-winning screenwriter who poured his heart and soul into these amazing movies that still effect us deeply seventy years later. 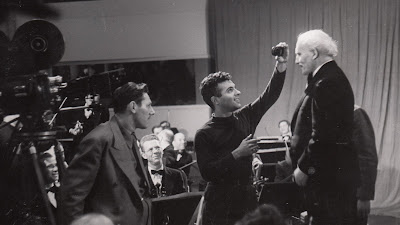 Tell me about the Toscanini film. Do you know anything specific regarding the reaction in Italy to the film?
Among the most dazzling of the twenty-six Projections of America documentaries was a short film that paid tribute to the great conductor Arturo Toscanini. The maestro had fled fascist Italy for the United States and Riskin and his filmmaking team recognized that a filmed portrait of Toscanini could be a powerful resource to show to newly liberated audiences in Italy. Millions of Italian filmgoers crowded cinemas to watch the Toscanini film, in which the brilliant conductor led a performance of Verdi’s Hymn of the Nations, updated to include the national anthems of the Soviet Union and the United States. It didn’t surprise me that Italian audiences responded enthusiastically to the film, but what was especially moving to me was meeting a German Jewish woman who survived the war and remembered the powerful emotions she felt watching the film of Toscanini performing Verdi in a bombed out cinema in Berlin. 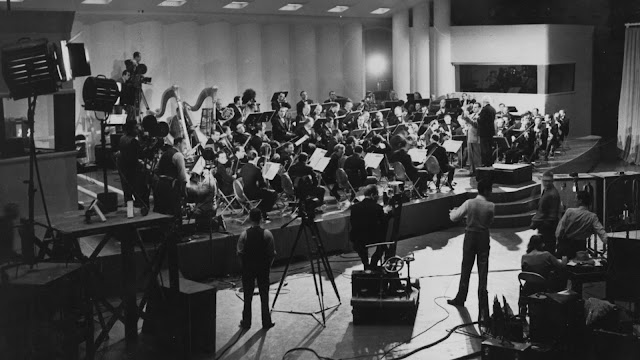 Would you say that the American propaganda films were similar to what Italy was doing with the Telefoni Bianchi films?

The Projections of America films were made by liberal American filmmakers who envisioned a pluralistic, democratic, multi-ethnic America — one that presented their nation as it could be if were to live up to its ideals. The filmmakers came from Hollywood — Robert Riskin was the screenwriter of many of Frank Capra’s greatest films — and they came from the progressive documentary tradition of the New Deal era, but they shared a profoundly democratic vision that was expressed in these short films. I’m sure the Projections of America films were a contrast to the kinds of conservative cinema that Italian audiences were accustomed to from the fascist era, and they stood in great contrast to the Nazi propaganda films that were forced upon occupied European audiences. Cinema has the power to change lives and shape minds, both for better and for worse. What draws me to this story is that during the darkest days of global war, the power of the movies was harnessed for such positive messages. The messages in these 70-year-old films still resonate today and can help us think about what kind of country we can be in 2016. Are we a welcoming nation of immigrants or we a belligerent bully? Should we celebrate our diverse culture or should we thump our chest? 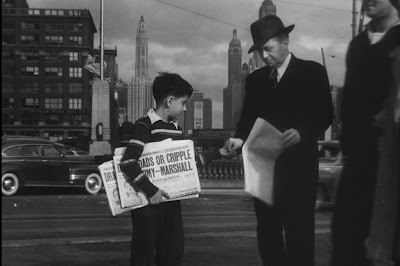 Are these American propaganda films available for people to watch today? Is your film available outside of screenings?
We’re working with PBS to arrange for a broadcast and for video distribution of our documentary — stay tuned for more information. Some of the short films in the Projections of America series are available on scratchy videos on YouTube, but for the most part these films are unavailable, and the series itself has been forgotten. When we release our documentary on television and video we hope to release our new transfers of the short films as well. They’re wonderful films and should be seen.

I’d like to revisit the topic of Sacco and Vanzetti for a moment. With the refugee crisis in full-swing right now and the Republican presidential nominees saying they’re going to send immigrants back, and then in the next breath, saying with pride that their own parents were immigrants, can you talk to me about the prejudices and struggles that Italians faced upon arriving in America? In your opinion, how did their struggle compare to what is happening today? 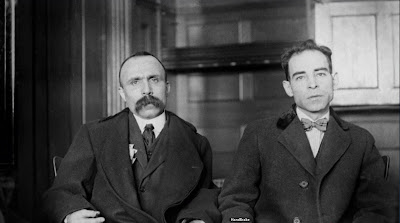 America is thought of as a nation of immigrants but too often we don’t live up to that ideal. The story of Nicola Sacco and Bartolomeo Vanzetti is a powerful cautionary tale of a time when we were at our very worst. Sacco and Vanzetti were Italian immigrant radicals and the prejudice that they experienced — both because of their ethnicity and their political beliefs — is sadly parallel to what immigrants and those outside of the political mainstream experience today. It breaks my heart to see many Americans, including the children and grandchildren of immigrants, responding to the current refugee crisis by wanting to shut our doors rather than opening our arms and hearts. We are a better nation when we embrace diversity and welcome people who will enrich our nation, when we celebrate dissent, when we respect democracy. I make films about history because I believe knowing history can help us better understand America today. Introducing movie audiences to Sacco and Vanzetti, or Robert Riskin, or Arturo Toscanini, can be a powerful way to remind ourselves about the kind of nation we could be if we were to embrace our best ideals.
If you're in the New York City area, a screening of the film will take place on Tuesday, March 29 at the Jewish Community Center. Click here for ticket information.

For more information about the film and upcoming screenings, visit http://projectionsofamerica.com.