Lacuna Coil is a heavy metal band whose unique sound and creative music videos have catapulted them to international stardom. The band consists of Cristina Scabbia and Andrea Ferro on vocals, Marco Coti Zelati on bass, Cristiano Migliore and Marco 'Maus' Biazzi on guitars and Cristiano 'CriZ' Mozzati on drums.


All members hail from Milan and bring to the table their own signature talent. A few years ago, the internet buzz about Lacuna Coil's music videos prompted me to check them out on YouTube. I've been hooked ever since. Their videos are creative vignettes shot all over the world, directed by cutting edge filmmakers in Europe and the United States.  Although Lacuna coil is considered a heavy metal band, the unique melodies in their songs are rarely found in traditional heavy metal. 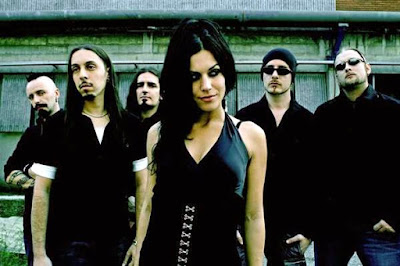 The range of the band is also something you rarely see in this genre of music. This is especially apparent in their songs "Heaven's a Lie" and "I Like It". The first is just a great hard rock song, and the video is mesmerizing to watch. It was shot in Sweden and features a gothic-like interior, which acts as the perfect backdrop for the intensity of the song. "I Like It" which is featured on their album, "Shallow Life" is a fun, lighter song, which showcases the band's more playful side. The video was shot in Kansas City and utilizes the members' acting talents as they take on a whole host of characters.


I talked with lead vocalist Cristina Scabbia about the band's beginnings, those infamous music videos and a possible second career as a leading lady on the big screen.


When did you join the band?
I met Andrea and Marco (Coti Zelati), the first original members in 1994. They wanted to produce a promo tape to send to some different record labels. They knew that I enjoyed singing even though I wasn't in a band. They asked me to do some choruses. They liked the result and asked me to stay.


What is your musical background? Has your singing been influenced by other artists?
I listened to a little bit of everything because I was the last one of four brothers and sisters. My older brother was listening to Genesis and Pink Floyd. My other brother was listening to punk and hip-hop and my sister was listening to traditional Italian music. Metal was not that present back then. As far as influences, there are so many artists that I like but in general, I always liked R&B singers because their voices are really warm and they have a lot of feeling when they sing.  When I was younger, I admired Madonna. I think that I got something from her spirit. I like the fact that she changes all the time and is not afraid of experimenting with different styles. That is something I really love because I think you have to evolve as a musician. Of course, you shouldn't regret anything you did in the past but it's normal that you add something new. It's really important to have an open mind.


Tell me about your videos. They are very creative and dramatic. What is the process of making a video?
Thank you, our videos have been very dramatic, but we did something completely different with our video for the song "I Like It" and made it funny. Our process for making a video really depends on the song but first we have to decide who will be the director. We always love to be really involved with our videos. That's why we pick out the clothes, for example, and decide on the storyline.


What do you do to prepare for the videos?  Have you taken acting lessons?

No, not at all. I think that every band takes a different approach to music and to the performing side. Of course the technique is really important because you have to play a proper show and you have to play good. You also have to offer a visual side which is done by your attitude onstage and how you can act in videos. We always have a lot of fun whether it's playing live or making videos.


Do you have any plans to act professionally?
I would love to try and act just for fun, for something different. It would be great to play a little cameo in a movie. I don't consider myself an actress yet, though. So far, I'm just a singer. I've actually been asked to act but now I'm completely focused on Lacuna Coil. I would love to do it when I have some free time. I'd love to explore acting.


How does the band write songs?
It usually starts from the idea of a riff and most of the time Marc is the main composer of the music but every member of the band gives different ideas. For example, Andrea and I are responsible for vocal lines and lyrics. Then Cris can write a part of a guitar. Let's say that Marc is the coordinator of everything. He writes a lot of stuff but he also puts together everybody's ideas. Then we go to the practice room to add stuff or to take away stuff. So until we're actually in the recording studio, nothing is really certain because we change a lot.


Tell me about your experience with Film Director/Musician Franco Battiato.
I love the man. He's really a gentleman. I got an email from his management saying that he wanted to work with me and I thought it was a joke because our types of music are completely different. I wasn't even aware that he knew of me. I accepted immediately because I have a huge respect for him. He's one of the few Italian artists who took Italian music to another level. It's something that is just him. No one can be compared to him. So I accepted immediately and recorded my parts. I was in America, so he sent all the music files to me and I recorded them in Los Angeles and then when I went back to Italy, he invited me to the concert and they made a DVD. It was one of the best experiences I've ever had.
You've been spending a lot of time in American lately. What do you think of the Italian Americans here?
I love the fact that they're so proud. I love it! We don't always get this kind of pride in Italy, so I'm really happy to see it here. Everyone we meet who is even half Italian is like "I'm Italian! I'm Italian!"  So I say, "Oh can you speak Italian?" And they say "No but I want to because my grandmother spoke Italian!"  They're really, really proud and I love it. I absolutely love it!


Lacuna Coil is currently on tour in the United States. For tour dates and more information on the band, check out their website at www.lacunacoil.it.
at June 06, 2016