Set in the 22nd century, the new sci-fi movie "Andron," follows a group of young men and women who wake to find themselves in a confined maze. At first they don't remember anything about their lives but slowly their memories return and all they want to do is find their way back into civilization. But in order to break out of this underground world, the members of the group must find their inner strength and work together. This means learning to decipher codes, and overcoming mentally and physically challenging tests all while the outside world watches through a game, placing odds on their fate.

"Andron" is visually layered with a combination of scenes shot on the Mediterranean island of Malta and computer-generated imagery (CGI). The element I enjoyed the most was the exchange between the characters. The film features a crop of beautiful, young protagonists with some pretty sharp acting chops. There are some lines that I interpreted as a way to slip in some comedy relief. For example, "Clearly, we're not in Kansas anymore." The script for this kind of film is not written for the way we talk in everyday life. So there is an element of fantasy just in watching the actors recite their lines. I enjoyed watching the scenes with Alec Baldwin and his fellow veteran actor Danny Glover. Even if their lines are few, it is a pleasure to see these two American screen artisans work together.

The sci-fi genre is not one that has really interested me in the past but I was drawn to this movie for two reasons- Alec Baldwin and the director Francesco Cinquemani. I grew up with Baldwin’s work in the 80s, first on television with "Knots Landing" and then with films like "Beetlejuice" and "Great Balls of Fire." I remember when he left acting for a while and hosted a music series on the New York classical radio station WQXR. Then being from upstate New York, we were treated to some funny promotional work he did for the Wegmans grocery store chain where his mother is a dedicated customer. I consider Baldwin one of the most versatile and bravest actors of our time, always taking on new and interesting roles. He has never given a weak performance, so I was interested in seeing what he’d do with this role and genre. Cinquemani is an acquaintance I met a few years ago in Rome. He was introduced to me as a "Top Journalist in Italy". We became connected on social media and then recently, I noticed he directed this film.

I had some questions about the making of "Andron," and what goes into transitioning from journalist to sci-fi film director. Cinquemani was generous with this time and answers.

﻿Where’d you come up with the idea for this film?
I have always been fascinated by the fantasy genre. I was born in Rome and I live near the Colosseum. The gladiators have always fascinated me since childhood and that fascination was marked by old movies like "Rollerball" and "The Tenth Victim" (which is Italian). My background as a journalist led me to mix power, media manipulation, reality and gladiators in a vision of the future, even if it's slightly pessimistic. "Andron" began as a TV series. A pilot of the series was commissioned by RAI in 2011 and implemented in 2012. It was called "The Place." I shot it in Italian with Italian actors. Then due to an excessively high budget for Italy, the series did not continue, but the pilot has been shown in several festivals. The recent success of "The Hunger Games" has brought this type of genre back into fashion and allowed my dream for this series to become reality. My producers, Andrea Iervolino and Monika Bacardi viewed "The Place" and they asked me to develop it as a film.


The cast is very impressive and quite diverse. Did you have the actors in mind while you were writing the screenplay?
When I write, I hear the voices of the different characters. It's strange but true. For me, it’s as if they were alive and I see them and hear them. I never think of the actors first because it would influence and alter the characters. But there was an exception in "Andron" because I’ve known Gale Harold for years and I respect him as an actor and as a friend. I readjusted the character I had created for the TV series to accommodate him.

Speaking to the effects, how did you create the city?
Through months and months of work by interacting with my VFX (Visual Effects) supervisor, Peter Nalli and his incredible team of special effects wizards. Everything was discussed and decided beforehand. It was planned, designed and modeled in 3D, made with the other elements, inserted in the actual scene and eventually animated. In the scene of the dolly in which we see the city appear behind Michelle Ryan, there are over a hundred moving elements incorporated that we discussed and decided on in post-production. From the shape of each individual in the building where the river would form the inlet, the quantity and quality of the powder that had to be suspended in the air. In the film, there are nearly a thousand VFX. In the first installment of "The Matrix," there were just over 400.


What did you shoot in Malta?
All of the exterior scenes were shot in Malta. We shot most of the film in an underground power station located in Malta where there are several kilometers of studios. The rest was shot in Rome.

How did Alec Baldwin get involved?
He got involved thanks to Bruno Rosato, my casting director and to Danny Glover's conviction. I had already filmed the scenes with Danny and he spoke well of me as a director. Alec really liked the script and the character. He is a fan of science fiction. He understood all the irony that I had incorporated into the script. "Andron" for me is a bit of parody of this kind of movie where the hero always does well. The film tells the story of the bad guys. It starts with them and ends with them. For me it's the story of the rise to power of Adam (Alec Baldwin). There's a joke that he tells, pointing to the contestants: "You do not even understand the rules of the game." If a game like "Andron" existed in reality, competitors would not have any chance of escaping. 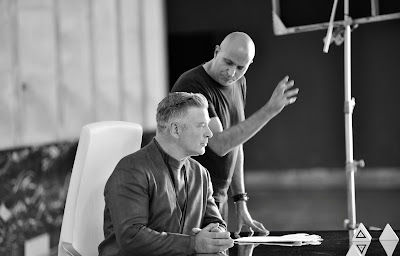 What was it like working with him?
He is a kind and extraordinary person with an exceptional talent. Baldwin is like a charge of nitroglycerin ready to explode. He likes to experiment and is wide open to improvisation. It's like having a Stradivarius in your hands, a tool with which you can play anything. He is always energetic and ready to go. Between takes and during down time, he doesn’t even sit because he doesn’t want to lose his energy.


Is "Andron" your first feature-length film?
It's my first feature-length fiction. Before, I had only made a documentary for an hour and twenty minutes, but when you are used to turn twenty-one episodes per year of a TV show, as I did from 2010 to 2012 when I had my own sitcom on RAI, it is not difficult to manage the timing of a film. 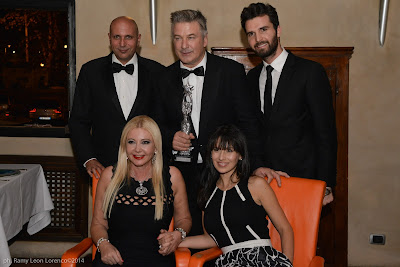 Tell me about your transition from journalist to filmmaker.
I wanted to be a director since I was six-years-old and saw "The Thing" and "The Invasion of the Body Snatchers." Then as I grew up, I realized that it was difficult to find a job working in cinema in Italy. So, I abandoned my dream and I started to study electrical engineering. To pay for school, I started writing articles and was published right away. I was eighteen and this crazy 23-year-old publisher asked me to run his company. It went well. I ended up publishing 30 magazines and in the end, I never became an engineer. Years later, I received another offer and I switched to another publishing house. Things were going well until one morning when I looked into the mirror and saw my old dream. I said to myself: "You're getting old. Soon, you're not going to have a choice. You either try now or live with regret for the rest of your life." So, I went into work that morning and quit my job. Six months later, I had my first TV series on Sky Cinema.

"Andron" is available to stream through Starz on Amazon..