"The Power of Change" - A conversation with Gabriele Mainetti

Even if Gabriele Mainetti is young and hip, there is a certain elegance about him. He stands tall and carries himself with confidence. When he opens his mouth to speak, this beautiful English with a slight southern accent comes out. When we sat down to talk, I commented on his accent right away and he told me that he studied filmmaking at the Tisch School of the Arts and that his sister lives in New York and his grandmother was raised in New Jersey. I kept this in the back of my mind. When I began to look into his background for this article, I researched his sister in New York and what a fascinating world I found.


Gabriele Mainetti's action-packed thriller "Lo chiamavano Jeeg Robot" (They call me Jeeg Robot) premiered at the Festa del Cinema in Rome last October. After a wildly successful run in Italian theaters earlier this year, it won an Italian Golden Globe for Best Film and also won a whole slew of David di Donatello’s- for Best Director, Best Actor (Claudio Santamaria), Best Actress (Ilenia Pastorelli) and Best Supporting Actor (Luca Marinelli). These are well-deserved honors for a film that is absolutely spectacular in every sense. A classic tale of good guys vs. bad guys, the film starts with a chase through the streets of Rome that leads to the banks of the Tiber River, where the bad guy, who eventually has a change of heart and becomes the good guy, jumps into the river to hide from the police. While submerged, he is exposed to radioactive materials that give him superhuman strength. Upon this self-discovery, he runs to the nearest ATM machine and literally pulls it out of the wall and carries it home. The whole thing was caught on tape by a surveillance camera and he instantly becomes a YouTube star. He ends up falling for the gorgeous daughter of a fellow criminal who is convinced that he's an actual superhero all the while a competing thug is becoming insanely jealous of his sudden fame. This sets the stage for one amazing brawl and chill-inducing final scene that embraces the inherent magic of cinema. 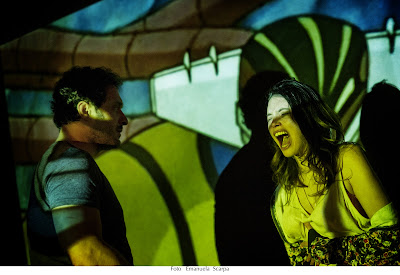 From the performances to the effects to the dialogue, I thoroughly enjoyed every moment of this film. “Lo Chiamavano Jeeg Robot” is the Italian version of a Hollywood action film. The difference is in the development of the characters rather than the plot. Although the plot and effects are intense, the audience falls in love with or grows to hate the characters. The good guy (Claudio Santamaria) tugs at your heartstrings while the bad guy (Luca Marinelli) is the epitome of detestable. The performances by these two actors are nothing short of stellar.

"Lo chiamavano Jeeg Robot" is director Gabriele Mainetti’s feature film directorial debut and his first film to arrive on American shores. It was recently shown in New York at Lincoln Center’s annual film series, Open Roads: New Italian Cinema. However, Mainetti’s family has a long and intriguing history in America- New York in particular. His father, Valter Mainetti, runs the Sorgente Group, a real estate and investment company based in Rome. There are three divisions. They are located in Italy, the United Kingdom and the United States. Gabriele’s sister, Veronica, is the president of the Sorgente Group of America.
She oversees restoration projects of historical buildings and landmarks, many of which are located in Manhattan. The company also owns the majority of shares in the city’s iconic Flatiron building. In an interview with the New York Times, Veronica Mainetti talked about the history of the family business. “My great-great-grandfather started it in 1910 in Italy; it was a company that manufactured iron back then. My great-grandfather actually moved to New York in the beginning of the last century, and in 1919 founded a company that was concentrating on just building load-bearing frames. My grandfather, in Italy, was a mechanical engineer. And my father had his beginnings with ground-up development, which then led to the reorganization of the company, Sorgente Group, which in 1999 started the establishment of real estate funds through which we now invest into historic and also iconic property. This is what we do here in the U.S.” Mainetti’s mother, Paola Mainetti is Vice President of the Fondazione Sorgente Group and is an art aficionado. Among the works in her collection are paintings by the 17th century artist Il Guercino (Giovanni Francesco Barbieri). The foundation hosts art exhibitions and events at various spaces around the Eternal City, including one of my favorites- the Galleria Alberto Sordi. So it’s no wonder why Gabriele is so talented. Creativity, talent and smarts run rampant in his family.


In addition to his success as a director, Mainetti is also an accomplished actor and musician. He landed his first feature film acting role in Sandro Cecca’s 2000 drama “Maestrale” (Winds of Passion) and also worked with Ivano De Matteo on "Ultimo stadio". He worked steadily as an actor for about a decade before shifting his focus to directing. Perhaps it was that 10 years of experience in front of the camera that enables him to empathize when directing his actors to draw such powerful performances from them as he did in his


The next scheduled North American screening of "Lo chiamavano Jeeg Robot" will take place on June 14 at the Italian Contemporary Film Festival in Vaughan, Canada. Click here to purchase tickets.
at June 13, 2016