A Hungarian Filmmaker and his Italian Story about a German Philosopher 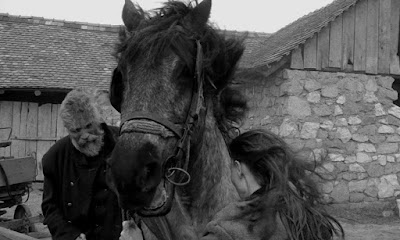 It's been a tough couple weeks watching the images of people- children in particular- suffering through war and natural disasters. First, we saw the heartbreaking image of a toddler being pulled from the wreckage of a bombing in Aleppo, Syria. Little did we know it was just the beginning of a week of similar images.. children being pulled from collapsed buildings after the earthquake in Amatrice, Italy. Some children made it out alive, while many others didn't. Among the images that struck me the hardest was a rescue worker reassuring an elderly woman buried in rubble, the rescue of 10-year-old Giulia and the countless shots of dogs- whether they were being rescued, helping with the rescue or sitting by the coffins of their masters. The dogs in particular that were rescued made me curious about their backstories and that reminded me of a clever, dark and mysterious film I saw a few years ago by Hungarian filmmaker Béla Tarr. So, I thought it would be an appropriate way to come back from such a devastating and dark week that we will certainly never forget. 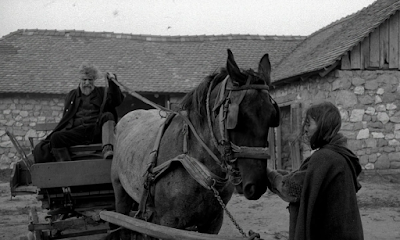 It's been described as a "radical and terrifying journey towards the end of the world." Set in 19th century Italy, Hungarian filmmaker, Béla Tarr's 2011 film, "The Turin Horse" traces the events following German philosopher, Friedrich Nietzsche's tragic encounter with a horse-driven cab in the Italian city of Torino that eventually led him to be bed-ridden for the next 11 years of his life until his untimely death in 1900.


The story recounts the events of January 3, 1889 when Nietzsche was strolling through the streets of Torino and encountered a cab driver having trouble with his horse. The horse wouldn’t move and the driver started beating it. Nietzsche was mortified by the abuse of this innocent animal and tried to stop it. As the story goes, he hugged the horse, started crying and fell to the ground. The incident left a permanent psychological scar on the German philosopher. Shortly thereafter, he was diagnosed with chronic mental illness from which he would never recover.


Screenwriter László Krasznahorkai approached the story from the angle of "whatever happened to the horse?".  The film addresses that question in a fictionalized tale of what may have occurred. In eerie scenes of dust and dry leaves circling and engulfing the vast landscapes of howling wind, "The Turin Horse" carries the signature of its director, Béla Tarr, who is known and revered for his incomparable style of long takes, black-and-white photography and little or no dialogue. This style can immediately be seen in the trailer for the film. If you are familiar with Tarr's style of filmmaking, the trailer will make sense.  If you are not, it may raise some questions.


Personally, I have always seen a strong parallel between Béla Tarr's work and the films of Pier Paolo Pasolini. The two directors always seem to portray the world in its most grim and desperate moments. They present people living with the bare essentials and trying to make ends meet in the gravest of circumstances. In a simple yet strong statement about his film, the Hungarian auteur described "The Turin Horse" as "a film about the unbearable heaviness of life and the monotony of life."  If you were to keep that statement in mind while considering the work of Pasolini, "Mamma Roma" and "The Hawks and the Sparrows" in particular, you would undoubtedly see the similarities in their work.


Three years in the making, "The Turin Horse" is reportedly the last film for Béla Tarr as a director. Since then, he has produced a number of projects. Fans of his work embraced this film as the curtain went down for one of Europe's most admired directors.