Interview: Fred Kuwornu on his Documentary on "Blaxploitation" 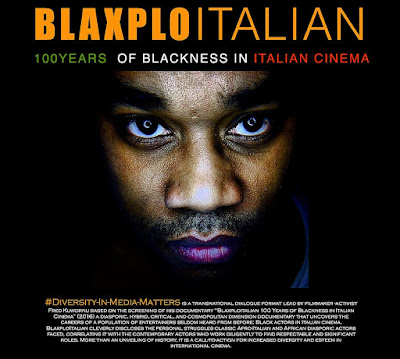 Filmmaker Fred Kuwornu describes himself as an activist-producer-director-speaker. He was born and raised in Italy by a culturally diverse family. His mother is an Italian Jew, and his father a Ghanaian surgeon who has lived in Italy since the 1960s. Kuwornu's experience as a struggling actor in Italy made him aware of how few opportunities there are for people of color. It didn't seem that Italian filmmakers were interested in telling stories that didn't pertain to your average white person.

Although Kuwornu is now based in the United States and has stepped away from the Italian film industry, I found his new documentary, "Blaxploitalian," to be a deeply personal assessment. Kuwornu carefully examines the Italian film industry and how people of color are portrayed. The film offers several different and interesting perspectives from a number of Italian actors and actresses of different origins. Kuwornu also gives his own perspective and talks about his experience working with director Spike Lee on his Italian production, "Miracle at St. Anna," the story of four Buffalo Soldiers who sought refuge in a small village in Tuscany. Kuwornu recently presented "Blaxploitalian" at the Eastman Museum in Rochester, New York. I caught up with him for his intriguing take on this issue.

What ignited your desire to tell this story?
I was inspired first after reading a book called "African Italia." It’s written by a professor of cinema at the University of Rome and it’s a book about the presence of actors of African descent in Italian cinema. After reading it, I decided to consider doing a documentary. At the time, I wanted to create a documentary in which I not only talked about filmmakers of African descent in the Italian film industry. I also wanted to mention this kind of story with the new struggle that many actors with immigrant backgrounds are doing in Italy to work. And so when I decided to create this kind of connection. It was two years ago and at the same time in England, there was a group of actors made up of blacks and Asians that wrote and signed a petition to the BBC to demand more diversity. So at the time, I realized that the topic of diversity in the media was a global, emerging topic. So we started the production and when we finished last year in February, there was a controversy in the United States connected to the Oscar ceremony and the lack of diversity. We decided that we should try to connect this story globally. And the inspiration also came from other books and studies I’ve read about diversity in media among every kind of social group, gender, sexual orientation and age.

Having lived in both Italy and America, what are the differences in diversity between the two countries?
Inside the film industry, the difference is that Italy is usually behind the U.S. 10 – 15 years. But there are many similarities because also in the United States, there is the emergence of the acceptance of new minorities. It may be working for the African Americans, but it’s not working for the Latinos. They are being treated in the U.S. they way other minorities are treated in Italy and Europe. The problem becomes apparent when the country and the average population of a country has difficulty to accept the new citizen as a part of their society because maybe they still see these persons as immigrants and not as Americans. So it’s the same feeling that people sometimes have with Latino-Americans. Even though they are Americans and they are born and raised here, many people believe they are immigrants. And so it’s more difficult to have a change of the mindset inside the industry.

If you look at a film like"Terraferma" that was made in 2011 about migrants literally swimming to shore and either having to hide or be sent back to the countries they fled, things surely have improved. In the last few years, more immigrants have been accepted into Italy and are assimilating into the culture. Have the opportunities increased for minority actors to represent this new population in cinema and have any of these new immigrants emerged as filmmakers?
A little bit but not enough to change the perception. The Italian film industry is still very homogeneous and it’s very hard for other social groups. It’s also hard for women because there are not many female directors. I think there have been some emerging actors but they are working more in independent productions and short films. It’s a way for emerging and experimental filmmakers to tell new stories using new actors, but not so much in the mainstream productions. So, these actors are not known.

Italian films are usually reflective of contemporary society. What do you think needs to change in Italian society to open up the filmmaking opportunities for minorities?
Italian society has changed but I don’t think that the film industry is connected to society anymore. Another problem is that the film studios are Rome-based and they are making stories about Romans. If you are from regions like Veneto, Liguria or Val D’Aosta, they don’t represent you.

What about the southern-based film commissions? It seems they’ve really been growing in the last few years.
Yes, they’ve been growing but so has filmmaking in the Trentino region and these places are mainly just used as locations. The stories themselves are not changing much. The actors are mostly Romans speaking in Roman dialect. It’s not like here in the U.S. where you can see an indie film about Texas by a filmmaker from Texas. Until about 15 years ago, it was rare to see an actor from Veneto speaking in his own dialect. If you weren’t from Rome, you had to go there and learn the dialect in order to work as an actor. Otherwise, if you’re from the South, you are stereotyped to play a gangster. So in Italy, it’s much harder to have diversity than in other European countries.

Is there a positive outlook for the future.
Well media has a large range and other forms are changing like shows for television and the web, for example. The situation is changing. Now with technology, society is changing fast. So I think the future will bring positive change.

"Blaxploitalian" is still being shown at international film festivals and universities. Click on the links below to watch "Terraferma" and Miracle at St. Anna" on Amazon.