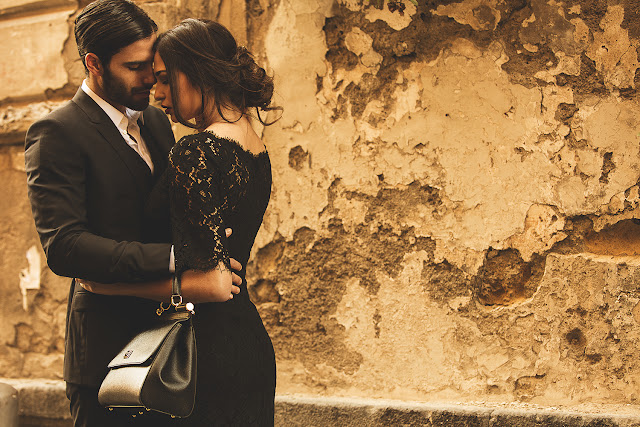 Through a series of stunning short films made for various Dolce & Gabbana advertising campaigns, Italian filmmaker and photographer Pepe Russo is showing the world the mystic beauty of the beloved city in which he was raised.

Born in 1977 in the fabled metropolis of Naples, Pepe Russo is the creative force behind some of Dolce & Gabbana’s most beautiful and poetic ad campaigns. The collaboration came about after Russo was discovered by Dolce & Gabbana co-founder Stefano Gabbana who ran across the young filmmaker’s projects on Instagram. Gabbana asked him to create something similar for his company that would “explain the DNA of their brand.” Up to that point, the campaigns had been shot mainly in Domenico Dolce’s home region of Sicily using high-profile filmmakers like Guiseppe Tornatore,  Martin Scorsese, Paolo Sorrentino and Monica Bellucci. Russo was thrilled and went right to work on his first project, which turned out to be a love story shot in black and white that reveals both the beauty and irony of the Neapolitan culture.

Amazingly, Russo did not study photography or filmmaking. He began this adventure by using his father’s camera and that’s when fate took over and this extraordinary talent of his was unleashed. To say that Russo’s short films are beautiful is an understatement. They are masterpieces that speak to the tradition, culture and mystery of Naples. You end up watching them over and over again because each scene is so filled with meaning and no detail is arbitrary. The lush, seductive vignettes in color as well as black-and-white exude nostalgia while showing the alluring modern city that Naples is today. In addition to drawing his inspiration from the area’s natural resources and unique architecture, he is also intrigued and inspired by the people, whose own personalities often naturally come out during shooting. 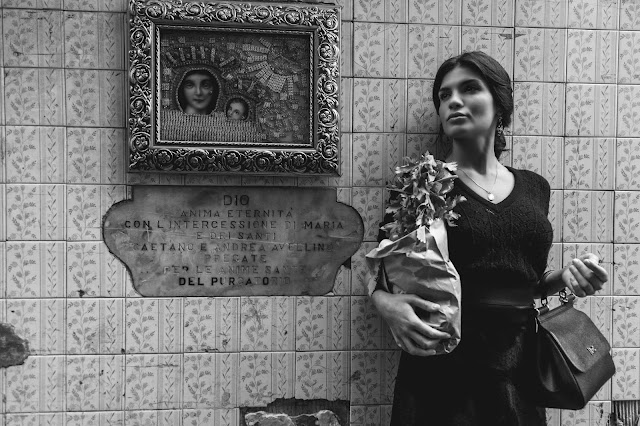 Dolce & Gabbana gives Russo the freedom to tell the stories of his city and more often than not, he is drawn to love. In the beginning of his collaboration with Dolce & Gabbana, he shot and edited the films. He recently began working with fellow Neapolitan Diego Perrini, who helps with the shooting so that Russo could focus more on directing. He openly admits to not being a fashion photographer. Therefore, he doesn’t use actors or models in his films. He relies on the uniqueness and expressions of faces when searching for his protagonists.

Russo and I are connected on social media. After seeing so many of his stunning pictures, I wanted to know the story behind his work. So I asked him about his creativity, background and future plans. What I discovered is possibly one of Italy’s future great directors.

I read that you inherited an old camera from your father.
Yes, when my father died, I was 20 and started to use his camera. I like to say that I inherited a camera and a lot of curiosity from my father.

Did you study photography or does it just come naturally to you?
I studied photography just by watching masters such as Henri Cartier Bresson, Robert Doisneau, Man Ray, and also important Neapolitan photographers like Mimmo Jodice and Antonio Biasucci. Jodice was a great inspiration for me. Through his photos, I started to see the places where I live in a poetic way, understanding the power of photography to say something beautifull without words.

Which specific qualities of your city inspire you to make these beautiful, creative short films?
Napoli is a wonderful natural set from the amazing landscape with Vesuvius in the background to the smallest street of the ancient center. And also the people.. Napolitans are full of traditions, humor, irony, even if they don't live in great situations. I'm not the first, and surely not the last to draw inspiration from this city. A lot of artists are born here and a lot come from other countries because Napoli is a special city. In my short films, I like to let the characters move naturally in regular daily life places. In particular, I like love stories.

How did your collaboration with Dolce & Gabbana come about?
Mr. Stefano Gabbana watched my short movie on instagram and ask me to write a short story to explain the DNA of their brand. Usually their ads draw ispiration from Sicily, so when I had the opportunity, I tried to tell a story in the mood of Napoli. The first video I shot for them was a black and white movie, a love story, but with some irony.. a Neapolitan touch! 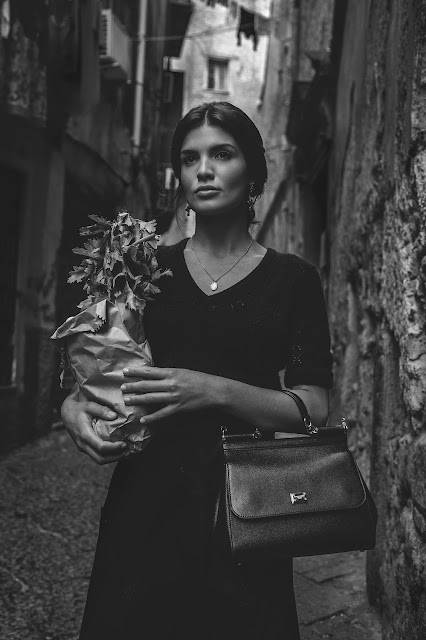 There are so many details in these spots. What went into creating the sets and doing the location scouting? What was your process in finding these perfect, beautiful "sets"?
Napoli is a big natural set. My scouting is just a walk down the street! Every corner has a sacred image, old seventeenth century buildings with stripped walls.

What do you want to communicate to the world about Napoli through these stories?
I love to show the traditions. My story has no time. And Napoli is a universal timeless city. Usually Napoli is under the focus for bad news and crime. I hope to give a better image of the city. There is a lot of beauty here.

Tell me about your filmmaking aspirations.
I hope one day to direct a real movie...it's a dream. So for now, I'll continue to work as a photographer and try to do my best...

Through these stories, Russo hopes to communicate a different message to the world about Naples and that message is indeed spreading. Dolce & Gabbana actively posts his work on all its social media platforms, which are viewed thousands of times over by curious people all over the globe interested in the tradition, eternal beauty and rich history of Naples. Given his vision and talent, there is no doubt that Russo's dream of directing a feature film will one day come true.

Pepe Russo’s short films for Dolce & Gabbana, including the spots from his most recent campaign, Pieces of History, are easily available on the company’s social media platforms such as Facebook, Instagram, Twitter and YouTube.
at April 09, 2017