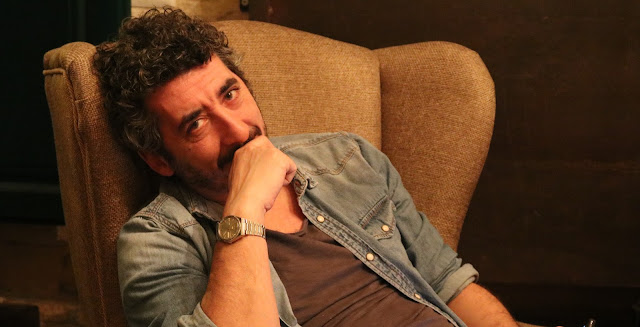 If you were only to know Nando Irene on social media, you would come to know the three leading forces in his life- his family, his land and his work. He comes from the southern region of Basilicata. Born in Matera, he was raised in the nearby town of Salandra, a beautiful landscape bordered by the region’s signature calanchi mountains and olive groves as far as the eye can see. When he talks about Basilicata, he recounts the past when it was referred to as Italy’s shame and how it has grown through the years to become a major tourist attraction and film set for countless movies including Mel Gibson’s The Passion of the Christ and more recently Ben Hur and Wonder Woman.

Irene approaches his craft with the same passion and enthusiasm he has for his land. When he decided to pursue acting as a career, he picked up and moved to Rome. He stayed for nine years, taking numerous courses and making contacts in the industry. It was during those years that he landed his first jobs in cinema and television: Fabrizio Cattani’s 2004 Il Rabdomante, the story of a Pugliese peasant who fights a land owner for the right to water, and the 2005 Mediaset fiction series, Il giudice Mastrangelo. Longing for his adored Lucania, he returned home in 2009 and continued acting in the three mediums: theater, television and cinema. Since so much cinema is made in Basilicata, he has appeared in numerous films, many of which have been shown at film festivals throughout the world. Among them is the short film Giallo in which Irene stars alongside fellow Materese actor Enzo Saponara. The film offers 20-minutes of full-immersion into the mystic world of Matera’s culture and land. Set mostly in the infamous ghost town of Craco, the film consists of a simple story: a man trying to help his younger brother come out of a depression. It is a story interpreted by two fine actors amid breathtaking views of vast mountain ranges seen from an ancient uninhabited city.

In addition to Irene’s prolific acting career, he has turned his passion for his land into a parallel career as a restaurateur. Vicolo Cieco Salsamenteria is a hip restaurant/bar located in Matera’s ancient center, which specializes in locally cultivated products and wine. The restaurant is decorated in 1950s style Americana with retro couches and kitchen sets along with a jukebox that plays classic American hits from the 50s and 60s. That's where I met him for a great conversation about his work and his beloved region of Basilicata. In addressing the cinema that was made in the region decades ago, in particular Francesco Rosi’s 1960 Cristo si è fermato a Eboli (Christ Stopped at Eboli), Irene address the stigma left on the region by those accounts of such desperate times.

"About Carlo Levi.. I remember this beautiful film with Gian Maria Volontè who per me is a great example of an actor and someone that I want to emulate, although I can't imagine every being as great as him. Christ Stopped at Eboli.. My subtitle would be "meno male." It's a good thing Christ stopped at Eboli because up to Eboli, the factories are disappearing, there is no work, there is Camorra (mafia) that is polluting the land. But once you pass into Basilicata, it's like a happy island. We are few inhabitants.. maybe 100,000. We can go skiing in the mountains, we can go to the sea. On one side of the region, there is white sand and on the other side in Maratea there is the gorgeous rocca frasgliata (jagged rock formations) along the coastline. In the winter, you can go to Pollino to ski. We have the desert where they've also shot Westerns. You can do anything here. We are the heart of southern Italy. It was abandoned for many years, and now it's being reborn as a land to explore and discover, a land of nature, of good food and clean air. So, come to Basilicata!"


Irene’s next cinema project is currently in pre-production. Directed by fellow lucano Nicola Telesca, Rumore is a love story set in the shadow of the sensitive environmental situation concerning the petroleum extractions in Basilicata. The film will feature a cast of Italy’s great contemporary actors, including Antonio Andrisani, Antonio Gerardi, Valeria Solarino and Pascal Zullino.