A Conversation with Italian-American Filmmaker and Artist Burt Young 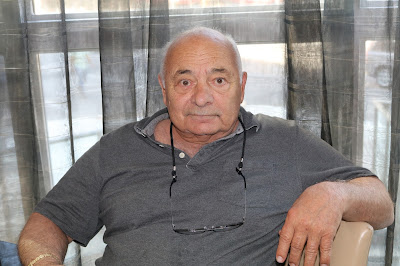 One of America’s most beloved character actors, he is best known for his role as Paulie Pennino in the Rocky films, an unforgettable portrayal that spanned four decades of cinema.

Actor Burt Young was born Gerald Tommaso DeLouise on April 30, 1940. The son of Pugliese immigrants originating from Bari, he grew up in the tough Italian-German neighborhood of Corona in Queens, New York. “I grew up with honesty and loyalty. They were very decent, family-oriented people,” Young shared at the Italian Contemporary Film Festival in Canada, where he presented his latest film, “The Neighborhood” alongside Danny Aiello and Giancarlo Gianni.

Burt Young gets emotional when talking about his beloved parents..

Young originally had no intentions of becoming an actor. Prophetically, he started out as a boxer but then fate stepped in. “I met this girl and I wanted to be close to her. She wanted to study acting with Lee Strasberg. I didn’t know who Lee Strasberg was, but I figured that I could get into anyplace. So, I got a hold of him and I auditioned with her. She folded because we had Paul Newman and Elia Kazan for judges. When I got nominated for an Academy Award, I received two telegrams. One was from her and she wrote, ‘Remember, you owe everything to me.’”

Before the life-changing role of Paulie, Young was building his career with the likes of Roman Polanski, Jack Nicolson, Faye Dunaway, James Caan and Sam Peckinpah. “I learned more working with Peckinpah because all the actors and producers were scared because he was a crazy man. But I enjoyed him a lot. He gave me my freedom. He was wonderful.” Those early roles in Polanski’s "Chinatown" and Peckinpah’s "The Killer Elite" established Young as a no-nonsense tough guy and he went on to solidify that image. However, as the Rocky films progressed until his last reprisal in "Rocky Balboa" in 2006, Paulie matured into a devoted and caring brother-in-law and friend. When I asked him how he managed the evolution and growth of Paulie over the years, he commented on the fact the Paulie was becoming too complicated a person. "I had to pull him back because he was getting too educated. I had to bring him back to infancy, emotional infancy."

Young didn’t realize what a breakout success "Rocky" would be, “but I knew it was very good writing. It was clear, clean and informative. I loved it very much,” he recalls. “William Morris was my agent and they wouldn’t pay attention to the producers. They said, ‘What are we talking about, a million dollar movie?’ I said, ‘No, we’re talking about the best thing that’s probably ever going to walk by me.’”

Young feels the film’s worldwide success was due in part to its storyline “about all working people that were underneath the gun with no place for a future. "Rocky" was a freedom call, so to speak. Here was this smally educated guy and Paulie too, his partner, latching onto a dream enough to make them have hope.”

In addition to cinema, Young also works in theater and has enjoyed quite a run in television as well. He's made appearances in shows ranging from the "Rockford Files" and "Baretta" to "Mash," "Miami Vice" and "Law & Order." He also acted in an Italian-American-themed commercial for Dr. Pepper that is sure to awaken a sense of 1970s nostalgia and reminiscence.

Take a step back in time with the commercial...

Although Paulie is Young’s most recognized character, the film closest to his heart is one he actually wrote. “I wrote a movie quite a while ago, "Uncle Joe Shannon." I was a trumpet player. (In the film) Maynard Fergusson does the trumpet. He plays in the high c’s and I worked with him. We had duets together. I said I’m not good like this guy but I could get up there with him. I had a youngster that worked with me on two or three movies that I wrote, Doug McKeon. He was a wonderful boy, and now he’s got four children of his own. I had a great time with Maynard and the boy.”

Check out this concert scene from "Uncle Joe Shannon"...

Young attributes his ability to balance humor and drama to relaxation and concentration. “You have to have buttons for when you’re in that state. You get there and then you go into the role. I’m pretty good at that.” He enjoys working with younger actors and finds it flattering when they look to him for wisdom. “I like any attention that is well-meaning. Actors are a wonderful breed of people. They’re all trying: trying to better their lives, trying to get clarity with their lives and others around them. How could you not enjoy that?”

In addition to acting, Young is an accomplished painter. He’s had numerous exhibitions, with his next one coming up at the end of October at the Bilotta Gallery in Fort Lauderdale.

Burt Young currently has four films in development and all of his aforementioned films are available through Amazon. Click here to read my interview with his "Rocky" co-star, Talia Shire.