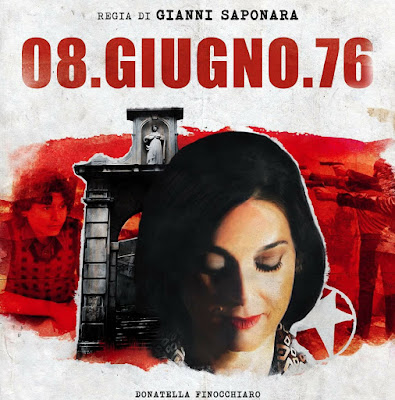 In the late 1960s through the 70s, a number of “ultraleft” political groups were formed in Italy. They vehemently protested conservative policies and the politicians behind them. In 1974, magistrate Mario Sossi had the members of the ultraleft political movement XXII Ottobre (October 22) tried and convicted. Not long after, a Red Brigades commando kidnapped Sossi. Although he was set free a month later, at the time of the kidnapping, Genovese judge, magistrate Francesco Coco refused to negotiate with the kidnappers. On June 8, 1976, 12 days before an important election, magistrate Coco and his two police escorts were gunned down. The murders are known as the first politically motivated assassination of the left-wing movement.

That day, three men were murdered. Magistrate Coco was shot near his house along with the escort agent Giovanni Saponara. Not far away, a second group fired at the magistrate's driver who was waiting for him, killing the policeman, Antioco Deiana, sitting in the driver's seat. The escort agent, Giovanni Saponara was from Salandra, located in the province of Matera in the region of Basilicata. His wife Angela Zagaria and their two sons, 11-year-old Gianluigi and 8-year-old Angelo Giuseppe were left to deal with the devastating loss.

Four decades later, director Gianni Saponara tells his story in the new short film 8 Giugno ’76. The director is not related to the late agent, but knows members of his family. The film was shot in Giovanni Saponara's hometown of Salandra and features a cast and crew made up mostly of locals. Playing the part of Sayonara's widow Angela Zagaria, is Sicilian-born actress Donatella Finocchiaro. 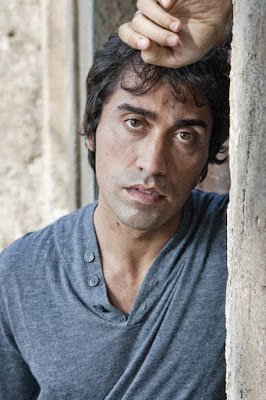 I spoke with actor Giovanni Andriuoli, who plays an assassin in the film. One of the most prolific actors in the region, Andriuoli has appeared in numerous productions made in Basilicata as well as national releases such as Pupi Avati’s Il papà di Giovanna and fellow Lucano, Rocco Papaleo's Basilicata Coast to Coast. I met him last year at a meeting of cinema professionals in Matera. I've followed his work for a few years now, so this is great opportunity to talk about this fascinating short film and other works he's done.

During the course of our interview, which we did through email and messages, I sent him several questions about this film and about his journey in becoming an actor. I was fascinated in particular by his response to my question about his inspiration to pursue acting as a career. After naming the film he saw as a child that influenced him the most, he told me how one phone call to a theater academy in Milan when he was just 12-years-old gave him the direction he needed, ultimately leading him to move to Rome. However, before taking that leap of faith, he attended the University of Naples where he majored in Sociology. During his first year, he met a street artist in the Piazza del Gesu that performed a monologue standing on a pile of bricks. "The performance made me rekindle this fire", Andriuoli explained, speaking to that first film he saw as a child. Shortly thereafter, he arrived in the Eternal City where he studied under the artistic direction of actress Anna Mazzamauro, best known for her role in Paolo Villaggio's series Fantozzi. One of his first jobs upon graduating was a play produced by the Spanish theatrical group Fura dels Baus, starring the iconic Greek actress Irene Papas. Andriuoli began his film career by taking small roles, one of which was a one-liner in Pupi Avati's film. He has since moved back to his beloved region of Basilicata where he's become a multi-tasker, juggling his work as an actor, entrepreneur and clothing designer promoting the rich culture of his region.

It was such a pleasure to have this virtual conversation with Andriuoli because like many young actors and actresses, he is filled with enthusiasm and dreams, and that positive energy is infectious. I originally interviewed him in Italian, so both versions are included.

As an insider, what can you tell me about the film?
It's a dramatic story about the murder of the magistrate Francesco Coco in which there is a storyline about the Brigade Giovanni Saponara, a member of Coco's escort. An honest man, he was strongly anchored to his Lucane origins. He was a family man and a loving husband. He fell into the bloody Genoa attack on June 8, 1976. Before going on set, I worked a lot on the character both on the physical aspects and on the inner and psychic aspect- his motivations, etc. 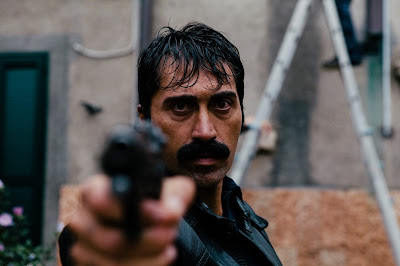 Tell me about your character.
I play one of the brigades that killed the first magistrate in Italy, Francesco Coco. The names of the brigades who committed these murders are to date, still unknown. No one knows who they are. For the role of this commando, I looked at photos taken during the era of the Red Brigades, and read a few books that concerned the life of the brigadist Mario Moretti. In order to look the part, in the weeks before shooting, I grew a mustache and 70s hairstyle.

Watch a news report (in Italian) with actual footage of the murders behind 8 Giugno '76...


Speaking now about your work apart from the film.. I've interviewed many artists of southern origins. They talk about their passion for the land of Lucania and how they've integrated their origins into their art. Do you feel that the region of Basilicata has influenced you as an artist?
They call me a chameleonic actor because in every job, I can transform myself into any role. In February and March, I'll be working on a film that will be shot between Rome and Trieste. After living in Rome for 12 years, I returned to Basilicata a few years ago and I'm still able to do auditions for work. I feel very close to Lucania to the point of having created a clothing brand called SeeMoreTee, which means seeing more with respect to looking beyond what we are just physically seeing. It's a project that brings art and culture together in a movement. This is a desire to express and spread the art and culture of Lucania through fashion. It's my certificate of Lucanian identity, of the Lucanian culture, of the Lucanian art. So, the movement, the territory, the world of culture, the future of art and the Lucanian artist  translate themselves into works for my brand SeeMoreTee. The products are available on the website, www.seemoreteeclothing.com 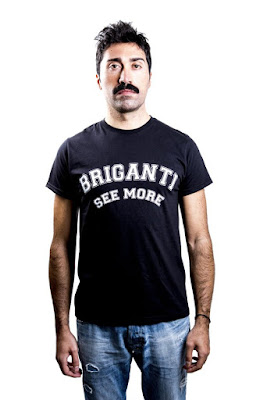 What made you want to be an actor?
I spent part of my childhood and adolescence living between Potenza, the capital of the region, and Gallicchio, a small town. I was raised being in close contact with nature and the people who cultivated the land. Thanks to my grandfather, a man who just turned 93-years-old, and spent two and a half years of his life in a Nazi concentration camp and another 14 working underground in a mine, I learned that life must be taken to heart and that family values must come first. When I was 5-years-old on a Roman holiday, I entered a cinema for the first time and I was lucky enough to see E.T. by Steven Spielberg. I was totally fascinated. Back home, I did nothing but talk about this film to anyone I met.

Tell me about your experience working with the great Pupi Avati?
Actually, I was on the set of Il Papà di Giovanna just to make an appearance as an extra. While I was there, they chose me to recite a couple lines. These were the first lines I said in cinema: "The war is over, the war is over". I portrayed a student who gave the news of the end of the war to Silvio Orlando's character. Being my first time on a set, I was very anxious, but the master Pupi Avati was very kind in reassuring me. It was a wonderful experience.

8 Giugno '76 premiered on December 4 in Italy at the Casa del Cinema. Follow the film's Facebook page for information on future screenings. In the meantime, watch Giovanni Andriuoli in Giuseppe Marco Albano's tourism spot Basilicata is than more a film.