Each Sunday during the winter, we will be putting the spotlight on films with a culinary twist, whether it be an article, interview or just a post on one of our social media platforms. The focus for this series will be on the southern part of the Italian peninsula- in particular, the regions of Basilicata, Puglia, Calabria and Sicily. 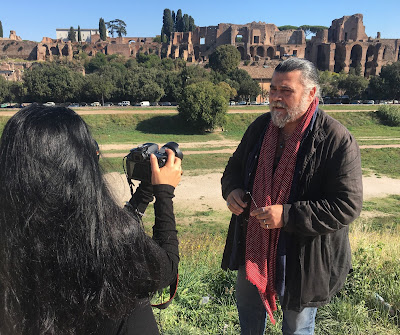 During the summer, I traveled through central and southern Italy and spoke with a number of contemporary filmmakers of lucano origin about why Basilicata is emerging as a land of cinema. I asked these filmmakers what motivates them to stay in Basilicata when so many of their young counterparts have fled to northern regions in search of work. While in Rome, I met up with the accomplished, award-winning artist and filmmaker Gaetano Russo, who we will be visiting often in this series. He is from Bernalda and is very active in the filmmaking and artistic communities throughout the region. He is a cousin of Francis Ford Coppola and that is apparent by the interests they share not only in filmmaking but also in their appreciation of wine and the process of making it. We will talk more about that next week. For now, I'd like to share his thoughts on the qualities that make Basilicata so appealing to directors throughout the world.


According to Russo, the most interesting part is its contradiction. "There is a part that is still not very structured, not very technological and at the same time, it’s a fantastic natural set. Pasolini, the Taviani Brothers and many others have come to Basilicata for their projects." He went on to say, "Basilicata, in certain points, has forests that are similar to those found near the Swiss border or even in America. There are water falls, mountains, lowlands and rivers. There are a variety of characteristics that change from place to place. There is Craco, which is a fantastic, evocative place where the Taviani brothers shot.. and also Mel Gibson shot among these famous Calanchi."

Today, I’d like to talk a bit about that Taviani film shot in Craco, the deserted, crumbling town in Basilicata. Craco is situated on a mountain, which offers panoramic views of the infamous calanchi rock formations of the region. I visited in 2015 and I can attest to the deserted, erie atmosphere not only of the town itself but also of the winding, abandoned road leading up to it.

Il sole anche di notte (Night Sun), a 1990 film by Paolo and Vittorio Taviani was adapted from Father Sergius, a short story written by Leo Tolstoy between 1890 and 1898 and published (posthumously) in 1911. The film stars Julian Sands, Charlotte Gainsbourg, Massimo Bonetti and Nastassja Kinski. The story recounts a bright young man who, on the eve of his wedding, finds out that his fiancé has been having an affair with his beloved mentor. Destroyed by the news, he flees, joins a monastery and becomes a monk. Unhappy with this path he's taken, he retreats to the life of a hermit and removes himself from society. One night, a group of women set out to seduce him, prompting a life-changing turn. Tolstoy’s story was originally made into a film by Soviet directors Yakov Protazanov and Alexandre Volkoff in 1918. The book and original film are set in Russia. The Taviani brothers swapped the Russian set for southern Italy. Although the film is listed as being set in Naples, it was actually shot mostly in Basilicata. In the clip below, the opening scene is set in the lowlands of Craco with a pan of the magnificent calanchi mountains.The film premiered out of competition at the 1990 Cannes Film Festival.

The culinary angle today is a regional recipe I put together with a little help from our friends at Dispensa dei Tipici, an e-commerce website, which features culinary products from Basilicata and Puglia. The dish is called Cicorie e Fave (Dandoline Greens and Fava Beans). I’ve had many versions of this dish while traveling through Basilicata. One of my recent favorite versions, pictured below with the recipe, was at the Ristorante Al Becco Della Civetta in Castelmezzano, a town in Basilicata located in the province of Potenza, and also experiencing an increase in film production. In 2016, the Italian blockbuster Un paese quasi perfetto starring Silvio Orlando, Fabio Volo and Miriam Leone was shown in theaters across Italy and at film festivals throughout the world. The films was shot inCastelmezzano and the neighboring Pietrapertosa with many local actors and crew members. When I was visiting during the summer, a Toyota commercial that will air during the upcoming 2020 Olympics was being shot in the streets of in the same two towns.

Here's a fun fact about cicoria, which also speaks to its popularity in the south... When I interviewed Pif last June in New York while he was promoting his film, In guerra per amore, I asked him about the differences in how organized crime is portrayed in American vs Italian cinema. He told me about the infamous mafia boss, Bernardo Provenzano who was hiding in a barn eating cicoria when he was arrested by police. Pif's entire answer to my question was so interesting, let's revisit it. I asked him specifically about the differences and stereotypes between the Sicilian mafia and its American version.

"I think there's been a huge kind of misunderstanding about the mafia through films. (The Godfather) is a beautiful film. I'd give my eye teeth to make a film like that. It represents an American mafia in the 1950s, a mafia that is Sicilian in origin but is Italian-American. There is a very big difference between that kind of romanticized mafia and the Sicilian mafia, which is much less cool. For example, when Provenzano, the boss of the bosses was arrested, he was arrested in a barn eating bread and cicoria (dandelion greens). But thanks to Coppola, even the Sicilian mafia fell under the influence of this film. When Bagarella, a relative of Totò Riina, the other big mafia boss, had a wedding in his family, he insisted that the music played at the wedding be the music that was played in The Godfather wedding scene. The funny thing is even the word itself mafia didn't really exist in Sicily. They called it the Cosa Nostra. But the film had such a huge influence on the Sicilian mafia itself, which is dazzled by it and have fallen in love with the myth of the film."

We will also be revisiting Castelmezzano in the future to hear from the new generation of Lucani who choose to stay in Basilicata and develop the region as a natural set for cinema and as a vacation destination for international travelers looking to enjoy the purity of Lucania. Please contact us on our social media platforms listed at the top, righthand side of the page, if you have any questions about filmmaking or traveling in Basilicata. Please also visit us on Instagram where you will find additional photos that we don't have the space to post here. 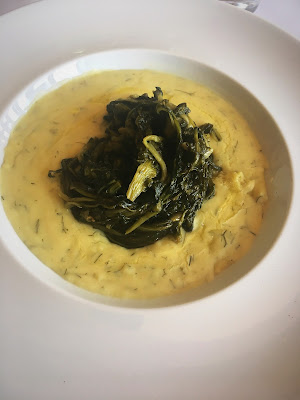 This dish is what I call "compassionate comfort food" (cucina etica casereccia) because it's rich in flavor and it's vegan. This recipe serves 4-6 people and is very simple to make. Enjoy!

Soak the beans in water overnight.
Cook them in salted water until the consistency is very soft. Then transfer them to a food processor or just drain the water and return them to the pan and mash them until a puree is formed.

In the meantime, boil the greens in salted water until they are tender. While they are boiling, cut the garlic clove in half and sauté it in a skillet with hot pepper. Strain the greens, add them to the skillet and sauté for a few minutes. Transfer the puree to a dish and top with the greens. Add a little extra evoo, salt and hot pepper to taste. Buon Appetito!

Join us next Sunday as we take an in-depth look at two enchanting short films directed by Gaetano Russo.
at January 07, 2018