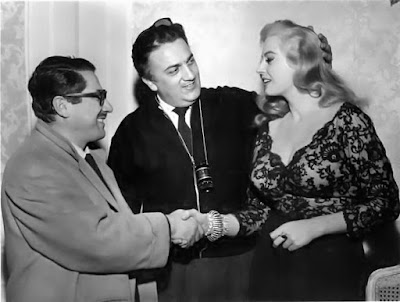 ROME, ITALY, October 8, 2019– The Academy Museum of Motion Pictures today announced Istituto Luce – Cinecittà as a Founding Supporter with a five-year agreement in support of an annual series of Italian films and accompanying public programs. The museum will be the world’s premier institution dedicated to the art and science of movies and moviemaking. Over the course of the five-year agreement, the Academy Museum team will curate an annual series of Italian masterpiece film screenings and programs in consultation with Istituto Luce – Cinecittà. The first will be a centennial tribute to the legendary writer-director Federico Fellini (1920–1993), which will travel to major museums and film institutes in Europe, Asia, South America, and the United States.

The partnership was announced today on the occasion of the first Academy of Motion Picture Arts and Sciences member event in Italy, co-hosted by Istituto Luce – Cinecittà, with the support of Mastercard. At the reception and dinner to be held at Palazzo Barberni in Rome this evening, Academy CEO Dawn Hudson and Academy President David Rubin will welcome nearly 200 Academy members, filmmakers, artists, and dignitaries, and celebrate the great achievements of Italian cinema.

“We are pleased to partner with Istituto Luce - Cinecittà to bring iconic Italian cinema to movie fans visiting the Academy Museum from around the world,” said Academy CEO Dawn Hudson. “Federico Fellini was my first love in international film—his work defines the art of cinema. And through the years, many more of Italy’s great films and directors will be featured.”
President and CEO of Istituto Luce - Cinecittà Roberto Cicutto said, “We are proud of our friendship with the Academy of Motion Picture Arts and Sciences, which shares our deep commitment to preserving films and film heritage, and we are delighted to align ourselves with the Academy Museum. This new, Renzo Piano-designed, institution is certain to become one of the great international beacons for everyone who loves film. We look forward to launching the series in Los Angeles next year.”
Bernardo Rondeau, Head of Film Programming at the Academy Museum, said, “The Academy Museum is committed to celebrating the highest achievements in global cinema. We are excited to collaborate with Istituto Luce - Cinecittà for this five-year series of Italian cinema. We will provide an Academy experience to present each of the films in this series.

###
About Istituto Luce – Cinecittà
Istituto Luce - Cinecittà is the state-owned company for the preservation, restoration, and promotion of Italian cinema worldwide, from a merger of Istituto Luce (founded 1924) and Cinecittà (founded 1937). Since July 2017, Istituto Luce - Cinecittà has taken back the legendary Cinecittà Studios and post-production labs, as well as Cinecittà Digital Factory, the Studios’ digital center: which is responsible for post-production to restoration. It also houses the renowned Archivio Luce, (part of the Unesco’s Memory of the World Register), one of the largest European documentary and photographic archive; it is responsible for the distribution of European films and documentaries, and the promotion of Italian cinema domestically and abroad.
The collaboration between Istituto Luce - Cinecittà and the Academy of Motion Picture Arts and Sciences dates back to the 1990s. The two organizations have presented many great exhibitions and tributes together, honoring Federico Fellini, Roberto Rossellini, Dante Ferretti, and Sophia Loren to name but a few.
Editor’s Note:
Four films directed by Federico Fellini won Academy Awards® for Best Foreign Language Film. He was nominated 12 times for directing and writing and, in 1992, received an Academy Honorary Award in recognition of his place as one of the screen’s master storytellers.
About the Academy Museum of Motion Pictures
The Academy Museum will be the world’s premier institution dedicated to the art and science of movies. The Museum will be simultaneously immersive, experimental, educational, and entertaining. More than a museum, this dynamic film center will offer unparalleled experiences and insights into movies and moviemaking. Designed by Pritzker Prize–winning architect Renzo Piano, the Museum is restoring and revitalizing the historic Saban Building—formerly known as the May Company building (1939)—at the corner of Wilshire Boulevard and Fairfax Avenue. The Saban Building will feature six floors, including exhibition spaces, the 288-seat Ted Mann Theater, an education studio, special event spaces, conservation areas, a café, and store. The new spherical addition will connect to the Saban Building via glass bridges and will feature the state-of-the-art 1,000-seat David Geffen Theater and the rooftop Dolby Family Terrace with sweeping views of the Hollywood Hills.