Enrique Irazoqui talks about his role as Christ in Pasolini's 'The Gospel According to St. Matthew' 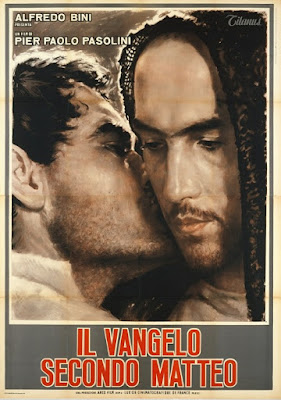 There have been countless interpretations and epic films made of stories from the Bible. Few have stood the test of time. One that has become a timeless recollection is Pier Paolo Pasolini's "Il Vangolo Secondo Matteo" (The Gospel According to St. Matthew).

Considered by the Vatican to be among the best film adaptations of one of the Gospels, Pasolini's 1964 film was shot in the ancient southern Italian city of Matera and captures the stone structures of the city, which date back to the Neolithic era. Pasolini cast his mother as Mary and many locals as extras. Spanish actor Enrique Irazoqui was cast in the role of Jesus. He was just 18-years-old when he landed the part. He had been in Rome at the time of casting. Acquaintances arranged a meeting between him and Pasolini. When Pasolini saw Irazoqui, he knew right away that he had found his Jesus.

I had the idea to feature this film as an Easter week streaming pick. Having been connected with Irazoqui on social media for some time, I thought I'd send him a message to ask permission to send a few questions about his experience working on this iconic film. He responded with the suggestion of doing a Skype call. Anyone who follows Italian Cinema Today probably has noticed that I am not fond of on-camera video presentations, but I could not turn down the opportunity to talk with one of my cinema heroes. I've been watching this film for at least 20 years and Irazoqui's interpretation of Jesus has remained my all-time favorite. His gentleness and angelic face embodies the image I've always had of Christ growing up and attending Catholic schools. I've always imagined him to be a soft-spoken, celestial figure. That is exactly how I see Irazoqui in this role. The first time he appears in the film, meeting St. John the Baptist, I feel, is one of the most beautiful scenes in cinema.

When I spoke with Irazoqui, our Skype connection wasn't great, and his video was pixelated. So I covered much of our interview with video. His audio was pretty clear until the end, so I decided to just write out the remainder of his answer. He also talked about Pasolini as a person and what it was like to know this immortal personality. I am going to post a second story on his gracious and generous description next week. For now, let's focus on his role as Pasolini's Christ.

Watch our Skype interview on YouTube or read the copy below..

What stands out in your memory of working on this film and shooting in the Sassi of Matera?Matera became Jerusalem. We spent about a week to 10 days shooting there. In the Sassi of Matera, I experienced a bit of irony on the set because when we were filming, every 10 or 15 minutes of every day, seeing that I was dressed as Christ, wearing the clothes of Christ, certain men and women, when I was talking with the apostles, asked me if I could perform a miracle for them. I didn't know how to perform miracles. I said, "I am not Christ. I am an actor that is portraying Christ." They didn’t understand anything. They didn’t understand anything because the difference between an actor and that which I was portraying didn’t exist. After dinner, I went for a walk with St. John the Evangelist and I smoked. They became angry with me and said, “Christ, didn’t smoke!"


Do you have a special memory, something that you will always hold close to your heart?

Yes, certainly. Something exceptionally special, above all, is Elsa Morante. Elsa Morante is my first image from "The Gospel According to St. Matthew." Then there is also Pasolini, Pier Paolo Pasolini.

How did this role change your life?
It changed my life in every sense.  For example, when letters of recommendation were needed to enter a university in Minneapolis, I made a phone call to Elsa Morante and she told me that she would take care of everything. So, I had letters of recommendation by (Jean-Paul) Sartre, (Simone de) Beauvoir, (Elsa) Morante, (Alberto) Moravia, Pasolini, etc. I don't think there was another with those letters of recommendation. The University of Minnessota sent me a telegram: "Offer follows". This is an example. Making the film was an extraordinary influence in my life.

Why do you think this film from 1964 is still so popular today?
I don't know. I think that maybe, and I don’t know for sure,  it’s because of the Vatican. The Vatican said that there’s never been a Christ like mine portrayed in a film.

It's worth noting that to this day, Irazoqui is still very much adored in Basilicata for this role. The city of Matera made him an honorary citizen. "The Gospel According to St. Matthew" is available to stream on Amazon, iTunes, Vudu and YouTube.

Click here to watch my 2018 documentary "Return to Lucania" in which I talk about films made in Italy's Basilicata region. Watch my 2019 Holy Thursday video, below, which features the sacred architecture of the Sassi of Matera.