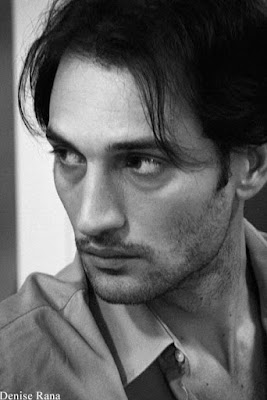 Looking back at one of my favorite film festival experiences, I remember the 2008 Rome Film Festival and the film I enjoyed the most- the sleeper hit of the festival, a small film made by young director, Toni D'Angelo, called "Una notte." The story follows five Neapolitan friends reunited after a tragic accident takes the life of another belonging to the group. It's a beautiful, character-driven story that focuses on these successful and not so successful adults who look back on their lives and choices.

I talked with one of the stars of "Una notte," Luigi Iacuzio. He was born in Rome, and grew up in Naples. He knew at a very young age that he wanted to have a career in the performing arts. Now in his early 40’s, he is a classically trained actor with a wide-range of training in theater, dance, singing and acting for film. He has studied his art in schools all over Italy including the University of Calabria, Teatro Bellini in Naples and Centro Internazionale di Danza in Cosenza. When you see him perform, it is obvious that he's had much diversity in his training. In "Una notte," Iacuzio plays the part of a jazz vocalist who performs in a small club in Naples. The role brought together his talent as a singer, songwriter and dramatic actor. After the screening of "Una notte" at the Casa del Cinema in Rome, Luigi Iacuzio sat down with me, and we talked about his career, his love for American cinema and how being raised in Naples is an asset to his acting.

How did you get your start in acting?
I started in theater 16 years ago. I made my first film in 2003 called Pater familias. It was directed by Francesco Patierno. Then, I made three movies in which I was the main actor and now, Una notte is the fifth movie I've made.

"Una notte" is a beautiful film about the bonds of friendship. What do you appreciate most about the story?
Well, I really like the friendship of these five people. They're not perfect. They all have their problems. I also like that my character is a singer because one of my dreams is to sing. I really love it, and I've performed in some musicals, too. And, I wrote the song for the last scene in "Una notte."

In the film, you're a jazz singer. Do you like to sing jazz?
Oh yes, I love Frank Sinatra!
Has growing up in Naples helped you as an actor?
Yes, I believe that if you live in Naples, you have something in your soul that makes you an actor. The Neapolitans are different from people of other regions and cities in Italy.  Naples is a place that is very alive, and very spontaneous. You can feel it in the streets. You are always talking with people, always greeting people when you get into your car, when you walk down the street. You're always saying "Ciao, come stai?" We're always communicating with each other.

Do you like American cinema?
Yes, it's fantastic! I love American cinema. I just met Al Pacino at the Actor's Studio here in Rome. I studied there with the Italian actress, Francesca De Sapio, who played Al Pacino's wife in "The Godfather."

Did Al Pacino have any advice for you?
He told us to conserve the child inside of us, and to be spontaneous.

Has he influenced your work as an actor?
Well, I saw many of Al Pacino's movies when I was growing up, and I studied his characters as I watched them.

Which Italian actors have influenced your work?
In Italy, the actor Giancarlo Giannini has had an impact on my work. In America, I'd have to say Al Pacino and Robert Deniro. I also like Vincent Gallo.

What is your dream?
My dream is to be a complete actor that sings, acts and dances. This is a dream for me, but I know that it will take many years of experience to achieve this.

Iacuzio's latest film "Terra" was recently shown at the Pesara International Film Festival. Directed by Marco De Angelis and Antonio Di Trapani, the atmospheric film explores the mysterious forces and energies of the earth and how they influence us. Check out the trailer..