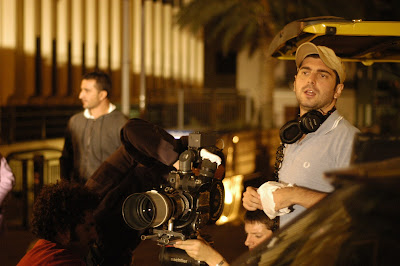 I attended the 18th edition in New York City a few years back when among the new crop of filmmakers was Toni D'Angelo. Toni is no stranger to my readers. I first wrote about him way back in 2005 when he was in the very early stages of planning his first feature film. One can say that he was just following in the footsteps of iconic father, the beloved Neapolitan singer and actor, Nino D'Angelo. Toni called on his father's experience as an actor by casting him in his first feature film. The two proved to be a great team as they delivered a touching portrait of Naples with its beauty, its problems and its rich history. "Una notte" follows a group of 40-somethings who reunite after the tragic death of a close friend. After attending the funeral services, they spend the rest of the night catching up and visiting their old familiar places that they frequented when they were young.

I talked with Toni D'Angelo that year at the N.I.C.E. Film Festival.  He told me what inspired him to write this story and what it was like to work with his father.

You just celebrated the North American premiere of "Una notte" here in New York at the N.I.C.E. Film Festival.  How has your film been received?
New York has been a great surprise for me.  Most of the audience has been American, and they tell me afterwards that this is a story that can take place anywhere, not just in Naples.  So, it can also be a New York story.

When I watched the film, I felt like it was a celebration of friendship, but also a love letter to Naples- its streets, its people and its magic...but also with its problems and the sadness its people feel for the things that are wrong. Is this how you felt while creating the screenplay?
Yes, exactly. I love Naples so much that I cannot stand to see it so destroyed, as is situation right now.  This film is my declaration of love for Naples. If you were born in Naples, you are Neapolitan, even if you live or grow up in another city.  In my case, I’ve live in Rome since 20 years, but I still feel Neapolitan.

What was it like to direct your father?
My father is one of the best Italian actors that we have, but directors don’t really use him in original roles. Unfortunately, he always ends up playing the same role. So, this was a nice change for him. It was easy to direct him. He was like a child who was learning something new about cinema. This independent style of filmmaking is new to him, so he was curious and eager to understand it. I didn’t just want an actor for this role. More importantly, I needed to have a face with which to describe the good side of the city; and who better than Nino D'Angelo, the clearest face of Naples to interpret this role.

Did he offer any advice, or did he just sit back and let you be the director?
He just worked as an actor. He respected me and the other actors.

His character is a very wise man. Did he improvise at all? Or did you write all of his dialogue?
I wrote everything in the screenplay, but I told my father to feel free to improvise where he wanted while keeping the sense of what I wrote.

When you created the characters, did you already have any of the actors in mind?
Yes, I actually chose the actors before and I wrote the story thinking of them.

Is this film, Una notte, what you had hoped for it to be?
I am the director, producer and perhaps the distributor, too. It’s already a miracle that the film was even made and that it’s being shown around the world. I want the best for “Una notte” the best because I really love it.

What lessons did you learn in making your first film that you will apply to your next. For example, is there anything that you will do differently?
I would not change anything about "Una notte." This is the power of the film. It’s a very poor film, meaning that it was made with very little money.  If I had more money to make it, it probably would not have been the same film.

What are you working on now?
I have more than a project in the works, but. I am being cautious because the second film is more important than the first. But I think that a good movie is not only the story, stories are similar and the same story has been told over and over.  What makes a great movie is the style in which you decide to tell it.

Check out my review of Toni D'Angelo's new film, "Filmstudio, mon amour", which premiered at the 2015 Festa del Cinema in Rome.