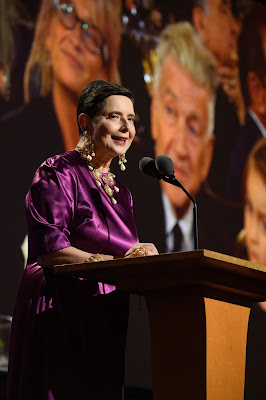 Three iconic women of Italian cinema took part in the Governors Awards on October 28 in Los Angeles. Sophia Loren gave a heartfelt tribute to her longtime friend and collaborator, director Lina Wertmuller, who received an honorary Oscar for her tremendous body of work that includes classic films like Seven Loves, Swept Away and Il Professore. Isabella shared the stage and translated Wertmüller's acceptance speech.

Rossellini gave her own tribute that evening to American director David Lynch. She told the story of how the two met at a dinner when Lynch brought up the script that he was working on. Helen Mirren had turned down the lead role, and he was wondering if perhaps Rossellini would be interested in checking out his script. Well she did and the rest is history. That 1986 film, Blue Velvet, instantly became a contemporary classic and has remained a masterpiece of American cinema.

The thriller co-stars Kyle MacLachlan and Dennis Hopper. Set in a small North Carolina town, the film follows a creepy series of events following a bizarre discovery made by a local college student. Lynch created a surreal world inside this film and it would go on to set the stage for the acclaimed television series and films that he made throughout the 1990s, which include Wild at Heart, Twin Peaks and Mulholland Drive.

Check out Rossellini's tribute and click on the link below to stream the film..

During a press event for the 1962 film, “Jessica,” Neapolitan-born actor Antonio Cifariello invites Angie Dickinson to get onto a Vespa....