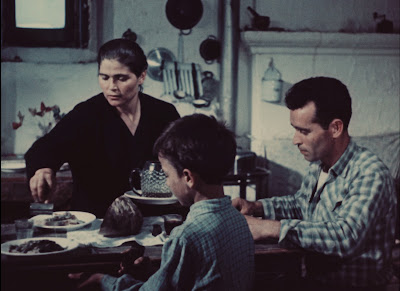 In the first edition of our annual series, Cinema & Cibo, the spotlight is on "I Maccheroni," a 12-minute short film made in 1959 by Raffaele Andreassi, which was selected for the culinary section of the 64th Berlin Festival.

"I Maccheroni" was shot in the beautiful seaside town of Gargano, located in the southern region of Puglia. The story celebrates the culinary ritual of Sunday sauce. However, sadly on this Sunday,  a poor family cannot afford to follow the tradition, so a little boy must find a solution.

The Abruzzo-born director, Raffaele Andreassi is best known for his 1969 film, "Flashback," which recounts the wartime experiences of a German soldier. Andreassi started out as a journalist and made numerous documentaries and short films. In 1960, he was awarded the Silver Berlin Bear for his short film "I vecchi." He passed away in 2008 at the age of 84.

"I Maccheroni" was definitely one of his lower key projects. I've searched for more information about this film and it's very hard to come by. Festival goers are lucky for the rare opportunity to see this lost gem.
Updating this post in 2021, the film has become available on YouTube. To bypass the intro in Italian, go to 3:05 where the film starts with English subtitles.