Alessandro Gassmann is the son of the iconic Italian actor/director Vittorio Gassman and French actress Juliette Mayniel. He was born in 1965 and grew up around cinema royalty.

He made his cinema debut in 1982 at the age of 17 in his father's autobiographical film, "Di padre in figlio." He went on to study his craft under his father's direction at the Theatre Workshop of Florence.

Vittorio Gassman was very active in theater and seemed just as comfortable on stage as he did in front of the camera. Known for his powerful interpretations of Dante's "Inferno" and "Paradiso," it is no surprise that he nurtured his son's acting aspirations on stage before he launched his career in television and film. One of Gassmann's strong qualities, which he undoubtedly inherited from his father is his incredible range and ease in going from genre to genre. He can play a light hearted, handsome love interest with the same conviction of playing a cunning villain.

Gassmann began his screen career with roles in television movies and within about five years, made the gradual transition to film. Now, he continues to work in both mediums. He's appeared in dozens of international productions and has portrayed his share of roles in English. His first major English language role was in director, John Irvin's 1995 film, "A Month by the Lake" in which Gassmann portrays Vittorio Balsaria, the handsome but quirky Italian love interest. Sharing the screen with the likes of Vanessa Redgrave and Uma Thurman, the role served as the perfect opportunity for Gassmann to show his impeccable comic timing and impressive range of versatility on the world's stage.

Two years later, he worked with director Ferzan Ozpetek on "Il Bagno Turco" (Steam: The Turkish Bath). He interprets the role of Francesco, who inherits a turkish bath house in Istanbul after his aunt passes away. He makes the trip with his wife to sell the bath and there he undergoes an unexpected spiritual transformation. Gassmann's performance is subtle yet intense as we watch him discover a world he never knew existed.

In 2009, he co-starred in another English-language film, "Single Fathers." Shot in New York City, the comedy focuses on a group a 30-something men separated from their significant others and trying to be good fathers. The group develops a friendship and supports each other through the trials of relationships and fatherhood. Co-written by Gabriele Muccino and directed by Paolo Monico, the film gives international audiences another opportunity to see both the funny side and thoughtful side of this versatile artist.

The following year, Rocco Papaleo's Basilicata Coast to Coast premiered to a full house in New York City during the 2010 edition of Lincoln Center's Annual film series Open Roads: New Italian Cinema. Gassmann took on the role of the debonair yet troubled Rocco Santamaria. The chemistry between Papaleo and Gassmann is strong. Their authentic friendship came through in their performances. 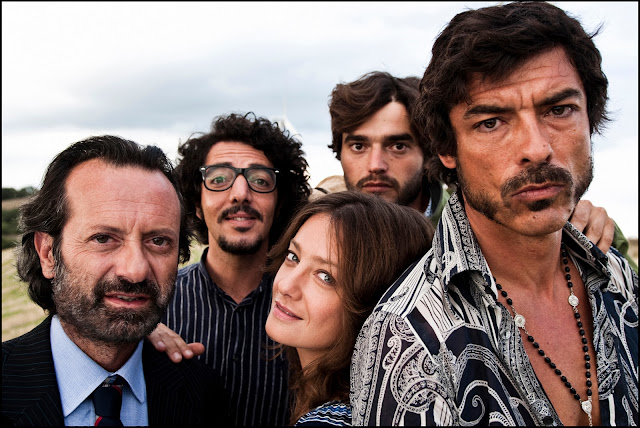 In 2013, Gassmann made his directorial debut with "Razzabastarda," the story of a Romanian immigrant who came to Italy more than 30 years ago and is forced to sell drugs just to get by and provide for his son. Gassmann also starred in the film opposite the talented young actor Giovanni Anzaldo. The two gave powerful performances and made a dramatic, forceful father-son team.


As Gassmann grew up in the spotlight, his personal life is relatively known in Italy. He married fellow actress, Sabrina Knaflitz in 1998. The couple met about 20 years ago through their mutual friend, filmmaker Gianmarco Tognazzi. They are still together and have a son, named Leo. When the Italian tabloid, Gossip Blog! asked Gassmann about his marriage to Knaflitz, he adoringly described his wife as "the mother of my son, a woman of great femininity but also masculine qualities.. she has fear in her and me gives me the opportunity to protect her, in return, she protects me. She's smart but never intrusive, and after spending 20 years with me, she should be considered for beatification."

In a 1990 interview with RAI Uno, a young Gassmann simply described his father as "Bravo." Vittorio Gassman passed away in 2000, so he was able to see much of his son's success.
at October 31, 2014