Sabrina Ferilli has been gracing Italian screens, big and small, since the mid-80's. With her recent role in Paolo Sorrentino's international blockbuster, "La Grande Bellezza" (The Great Beauty), audiences throughout the world are getting the chance to see why she is one of Italy's most beloved treasures.

Born in Rome in 1964, Sabrina Ferilli is the daughter of Giuliano Ferilli, the former leader of the Communist Party of the Lazio Region. Ferilli attempted to study her craft at Rome's Experimental Center of Cinematography, but later decided to abandon her studies and dive right into her career. Time has proven that she made the right choice. With dozens of movies to her credit, Ferilli has appeared on television and on the big screen, becoming a household name in Italy.

Ferilli is the very portrait of Italian beauty with her infamous figure, long brown locks and huge dark eyes. But as cliched as it may sound, she is so much more than just another pretty face. Ferilli's acting range is impressive. Whether she is performing in the genre of drama or comedy, she excels with such ease, it hardly seems she's working.

Ferilli's break came in 1990 with the role of Zaira in Alessandro D'Alatri's film Americano Rosso. Then in 1994, she earned her first  David di Donatello nomination for Best Actress in Paolo Virzi's debut film, "La bella vita." The film premiered at the 51st Venice International Film Festival and gave both Ferilli and Virzi the exposure they needed to jump start their careers. Since then, she's worked alongside Christian De Sica with director, Neri Parenti on three of his cinepanettoni or holiday comedies; "Natale a New York" in 2006, "Natale a Beverly Hills" in 2009 and "Vacanze di Natale a Cortina" in 2011. She's done numerous made-for television movies and series, including the role of Ida Di Giulio in "Baciamo le mani: Palermo-New York 1958," a TV series produced last year by the Italian television network Mediaset. 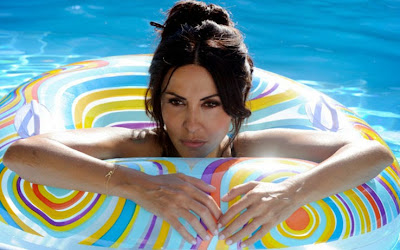 With all those roles to her credit, it looks like the most important of her career is upon her the year she turns 50. Ferilli plays the role of Ramona in Paolo Sorrentino's "La Grande Bellezza." Ramona is an intriguing character with a complicated past. When she meets Jep, the film's main character portrayed by Toni Servillo, it seems they were two lost souls destined for each other. Director, Sorrentino does not hold back in utilizing Ferilli's physical attributes, and her performance absolutely proves those attributes are equaled in talent. Physically, she is presented as eye candy, as the trophy companion of Jep, the main character. Her initial scene in the film involves a sexy striptease where little is left to the imagination. However, through the course of the film, beginning with the very next scene, her natural way of being a strong, complex woman is revealed, making her physical beauty secondary, and presenting us with a multi-layered woman who happens to be gorgeous, and proves to be a source of equilibrium in Jep's chaotic world. It's really no surprise that this film has done so well in America. It has all the qualities we look for when considering Italian cinema and the Italian culture. From the stunning cinematography to the dramatic music to the beautiful people and sex appeal of the city itself, we are presented with monuments to perpetual beauty and Ferilli fits in perfectly on this stage of the Eternal City.

Ferilli has maintained a relatively private personal life. She was married in 2003 to her companion of eight years, but it ended in divorce two years later. She is a die-hard AS Roma fan, which is Rome's official soccer team, and a member of the AS Roma Fan Council, a board made up and founded by high profile fans like the iconic Roman actor, Alberto Sordi. In 2000, the male population of Italy flocked to stores to pick up their copy of the SuperCalendario di Max, a calendar in which Sabrina Ferilli posed au naturale. Ferilli is known for her love of animals, in particular her cat, Romolo and dog, Nina. She says her favorite dish is pasta all`amatriciana.