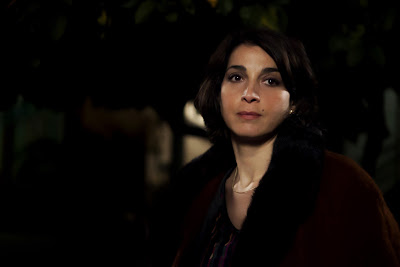 Whether she's playing the supporting role like her character in "Il dolce e l'amaro" or the leading lady in "Galantuomini," Donatella Finocchiaro has a commanding onscreen presence that makes her unforgettable.

Finocchiaro began her acting career in theatre but quickly moved to the big screen.  Her first movie role was in the 2002 drama "Angela" in which she plays the namesake role, a wife who gets involved with her husband's dangerous and illegal business of selling drugs. Although many of Donatella's characters have some involvement with organized crime, a stereotype that has been tirelessly overplayed, she is able to portray the human side of it, the way that this life and its stereotypes destroy families and dreams. She is often cast in these parts because the intensity of her acting has such a huge impact on audiences and the effect of the movie. Her characters hurt, and that pain is expressed through her dark penetrating eyes and her passionate performances.

I spoke with Donatella Finocchiaro at the Open Roads Film Festival at Lincoln Center in New York City while she was promoting "Galantuomini." I really enjoyed talking with her. She was very articulate in answering my questions, and you can tell that she loves her work. She glows when she talks about her characters and the directors she's worked with. She has the same intensity and sincerity off camera that she does on camera. As you'll read, Donatella did not have intentions of becoming a professional actress. In fact, she originally chose a very different career path.

When did you start acting?
I started to act later in life. In college, I studied law and actually became a lawyer. After I graduated college, I went to school for one year in Catania where I studied theatre. So after I took that one course, I started to land lead roles in plays that I auditioned for. I just took the acting course for a diversion to my dry career in law! I wanted to do something different, something fun. So within two or three years, I just decided to pursue acting and I left my career in law behind.  For a couple of years though, I was actually a lawyer and an actress!  It was definitely interesting!  But once I decided to pursue acting, it all moved pretty fast.  Deciding to study acting when I was older gave me an advantage because I was more aware of what I was doing, and I already had my own life experiences. 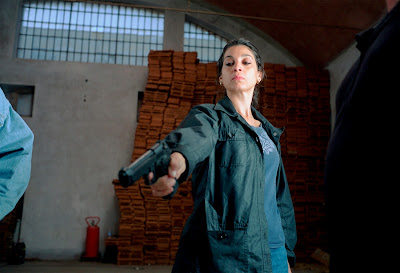 Tell me about Lucia, your character in "Galantuomini."
Lucia is definitely a woman who has to rise to a lot of challenges. She's a woman who needs to create a space for herself in a world that is dominated by men and of course she struggles with it. She fights left, right and center to do that. The movie at the same time is a love story and is a depiction of what life was like during the 80's in the Salento area of Puglia. The love story takes place in the city of Lecce. It describes that historical period and the relationship between two high school friends who loved each other ever since they were kids but were separated and ended up being on the two opposite sides of the law. He became a judge and she became head of the mafia. She struggles and has a very hard life that is full of contradictions. She could almost come off as being schizophrenic. We see her in many different circumstances. Sometimes she's very harsh and hard. Other times, she's very sensual and feminine. We also see her as a mother.  We see a lot of facets of her personality. That's the ambiguity of this character that makes the movie so rich; the contradictions, layers and dimensions to Lucia. She would like to be somebody else, but the world that she grew up in turned her into this person. So the movie is about this deep conflict within her, between what she actually is and what she would like to be. For her, love would be the only way for her to escape this tragic destiny of living a life where nothing is clear and nothing is clean. However, when she does have the chance to escape, we see that her destiny is already too marked. She may end up becoming a fugitive or she may be able to leave the life she knows, but she'll never be happy.

Your performances are always very intense. What do you look for in a character that makes you want to take on that role?
What fascinates me and draws me to certain a character is her contradictions, the idea that she can be one thing and so many others at the same time. This is what I saw in Lucia as well as many of my other characters in the past. So what I like to see is development of the character. I like to play a character that starts out in one way and ends up in another. I like when there is an evolution, but the conflict within the character is what ultimately makes me say yes to a part.


How do you transform yourself into your characters?
First, I observe people that are like the character in real life.  In the case of Lucia, I observed women in the Salento region of Puglia. What I noticed the most about them was their sweetness, and at the same time, their ability to lead.  They're very feminine but at the same time, they have everything under control. You see it all in their eyes.  They have a dignity about them that comes out of every pore of their skin.  Having said that, I also look within myself for my own contradiction as a woman. I think that we have everything that we need inside of us. It's just a matter of being able to take it out and express it. That's the type of skill than an actor refines and learns to use. You learn to actually draw from all those rich resources. In real life, people tend not to do that. They put on a mask and display that one character. If they really dug deep within themselves, they would have everything they need to do whatever it is in life they want to do.

What was it like to work with Franco Battiato on "Perduto amor?"
Franco Battiato is a complete artist. He's a musician, a director, a painter. He loves to experiment with every form of art. What I really like about him is his enthusiasm. He lives and feeds off this enthusiasm but at the same time, he has the quietness and lucidity of a wise man. It's like he combines the innocence and playfulness of a child with the wisdom of an elderly man whose been through life. It's a beautiful balance, and this is what makes him such a great artist.

At the end of they day, are you happy with the path you chose, leaving law for cinema?
Yes, I am really happy with the path that my career has taken. I can't complain because I have been offered a wide range of great roles that are very different from each other and are all very intense. I think it's true that one builds her own path based on her yes's and no's, with what you accept and what you refuse. I chose a road based on my own tastes and sensitivity.  I continue to choose roles that actually reflect who I am, what I like and my sense of what cinema should be.

Finocchiaro's most recent release, "Marina," is set in 1950s Europe. It's the story of following a dream by following one's heart, against all odds. Inspired by the true story of Italian/Belgian musician Rocco Granata who had a worldwide hit with his song "Marina" which sold over a hundred million copies over the world, the film follows a young Italian man's struggle to survive in a tough Belgian mining village. It's the account of a 10-year fight against poverty, social prejudice, cultural bias and an authoritarian but well-meaning father. But most of all, it's the romantic, compelling and warm story of a young man fulfilling his wildest dreams. The film costars Matteo Simoni and Luigi Lo Casco, and has been featured at film festivals throughout the world. Watch the trailer...