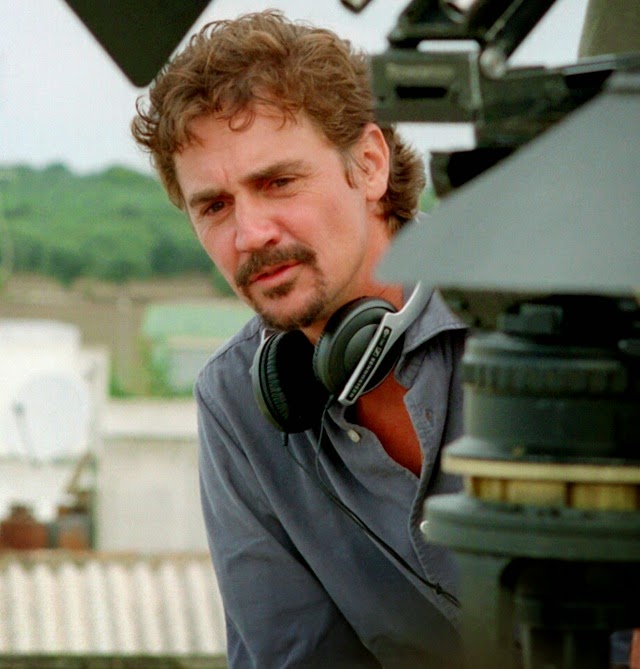 Born in Austria, director Edoardo Winspeare spent his childhood in the magical land of Apulia, where his Italian origins go back 300 years. That experience is vividly present in his work today. Winspeare's love for the Southern Pugliese culture is expressed in his mystical approach to filmmaking. Utilizing his documentary background, Winspeare is known for calling upon local musicians and casting many non-professional actors.

His latest film, In grazia di Dio (Quiet Bliss) was recently shown at Lincoln Center's annual film series, Open Roads: New Italian Cinema. The film, shot in Salento with nearly a complete cast of non-professional actors, reflects the current economic crisis facing Italians. Members of a family are forced to downsize their lives, selling their childhood home and taking on the laborious tasks of farmhouse peasants. Lead by the family's matriarchs, Adele and her mother, the family manages to hold on to their dignity and pride while making a living during the hardest of times. In a poignant scene, Adele has a weak moment and takes desperate measures in order to buy a new dress and enjoy a nice dinner with a glass of wine. She wants to feel human again, and to enjoy something nice after spending her days working from dawn until dusk sowing the land, growing crops and taking care of the animals on the farm. It's a beautiful scene that really gives sensitivity and humanity to this seemingly hard character.


In all of his feature films; Pizzicata, Sangue Vivo, Il Miracolo, Galantuomini and his latest, In grazia di Dio, Winspeare looks to his passion for the regional music and poetry of Southern Puglia to tell stories of family, the strength of love and the loss of culture. Contemporary Italy exists with tradition, resulting in a modern fable.
Click here for the traditional music of Sangue vivo.

I had the pleasure of speaking with Edoardo Winspeare at Lincoln Center's annual Italian film series, Open Roads: New Italian Cinema. He shed light on his unique style on filmmaking and his passion for the Italian culture.

Pizzicata, the story of an Italian-American fighter pilot shot down during WWII, is your first fictional film. Were you hesitant about your first film being a period piece?
I knew that I would have difficulties making a period drama. However, this choice had more charm and more fascination because 1943 is, for me, the year that ended a kind of civilization. In 1943, the Americans came while we were under fascism with the German Nazis. With the end of the peasant culture, we had this economical wonder when Italy became an industrial power. I needed a period where everything was clear with all of the contradiction.  Women stayed with women, the rich with the rich. It was not good, but it was clear.

There’s always a natural intensity to your characters. Is this a conscious effort?
This is my aim. For me, it’s actually very simple; it’s life, death, and passion. For example (my second film) Sangue Vivo (Live Blood) was about brotherhood, which is very important to me. Two brothers; one represents the old traditions while the other reacts passively to the pain of the loss of this culture, and he takes drugs. One is strong. The other is weak.

What is your reason for shooting all of your films in Puglia, and in particular, your film, Il miracolo, which you made a few years ago in Taranto?
I want to show the elements; water, light and fire. Taranto, in particular has all of this. It has the fire from the industry, the water from the sea and the light is very important because it is not only physical. Luce interiore (internal light)-  the boy gives the internal light to the girl and to his father and grandfather.


Describe Southern Puglia to me.
It’s a place that I like because it is obvious that people have lived there for 7,000 years. The interesting aspect of Southern Puglia is that we don’t have big Roman ruins or cathedrals. It’s the work of poor people. You can see it in the rural landscapes and stone walls. Also, we have the oldest olive trees in the world!

What are your favorite things about Italy in comparison to other cultures?
I know it sounds banal, but one thing is the food. People still cook and eat for an hour and a half, especially in Southern Italy. From 1:30 – 4:30, everybody is in their houses.  It is a country of people, not a country of nation. We are all different…Venetian, Florentine, Pugliese. I like this very much. In the dialects, you can hear Greek, Etruscan, Roman, Venetian; and then the beauty, the beautiful women, the beauty of the landscape. If you notice, the word ‘beauty’ or ‘bella’, although not always politically correct is used very much. Che bella donna, che bel passaggio, che bello; we use it very much. We call everything beautiful!

Edoardo Winspeare succeeds in capturing the old country as it was during the mass immigration, and the modern, developed country that Italy has become. All of his past films are available through Amazon.com. Amazon Films of Edoardo Winspeare.
at June 12, 2014