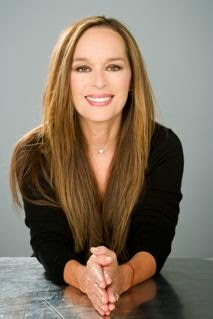 Veronica De Laurentiis recently launched her new web series called "Dillo a Veronica" (Tell it to Veronica) and honestly, I am hooked. The series has a very simple premise- Veronica meets with one woman for about 20 minutes to talk about her struggles in life and how she overcame them. Veronica should know because she overcame years of abuse and her empathy for the pain of others helps her when interviewing these women. The conversations are friendly and casual but gripping.

You do need some knowledge of the Italian language because the interviews are done in Italian and there are not yet subtitles. Personally, I love watching them in Italian because it's like a 20-minute language lesson on conversational Italian, especially with the different accents. The show is entering its fourth week, and new episodes are posted every Friday. There are three episodes currently available. You can watch them on the show's YouTube page or on Facebook. I highly recommend it.

Today, we start our week-long series, 7 Days - 7 Women, in which we will profile seven strong, talented women working as filmmakers, writers or visual artists.


"The universe will realign itself once you decide to follow your dreams."  Powerful words from someone who speaks from experience.

In America, she blazed into our living rooms as a guest on her daughter's Food Network show, "Everyday Italian ", hosted by celebrity chef, Giada De Laurentiis. But in no way is Veronica De Laurentiis your everyday mom.

She's gorgeous, glamorous and always wears a big smile, a smile that masks a lifetime of pain. "I grew up as a little girl who was scared. My mom was a perfectionist and my dad told everyone what to do," recalls De Laurentiis. Just as she is no everyday mom, she did not grow up with your usual parents. Her mother was Italian screen goddess, Silvana Mangano and her father was the prolific movie producer, Dino De Laurentiis. On one hand, life was beautiful as she had the best of everything. On the other hand, she felt like she lived to make everyone else happy, putting her own needs aside.
A few years ago, I had the unique privilege of speaking with Veronica De Laurentiis. She told me about her childhood, a tragic event that changed the course of her life and her decision to write a book and release the ghosts of her past. We are revisiting that interview now in recognition of her latest book release, the new edition of "Rivoglio la mia vita" (Reclaiming My Life).

Let's start from the beginning with your childhood. What was it like growing up with two cinema icons for parents?
My family had everything but one thing we did not show was emotion. We didn't talk about emotions. My mother was this incredible sex symbol, but she always seemed sad and depressed, and I tried to help her. I grew up thinking that I could not take care of myself. I always had to please others and do what I was told. Then when I was 18-years-old, I was raped by an older man that I was on a date with. I never told anyone and it led me to make choices that changed the course of my life. So, I had to pull up my sleeves and start from scratch. I was offered to play a part in a film that my father was producing called, "Waterloo." I found myself under the lights in front of the camera and my fear disappeared. I felt like this is what I was meant to do. But my mother didn't want me to become an actress and I was scared to go against her will, so I abandoned my dream.

After all these years, you've recently started to act again. What made you go back?
When I decided to go back to acting, I was 40-years-old and everyone told me I was crazy, including my father. I went back to acting the minute I started doing something about my passion. I stopped being depressed and I felt good about myself. I reached out for the dreams that I had. I went back to acting school and started acting again. Once you are on the right track, things start happening. I was just in a play in Italy that was beyond my wildest dreams. It was about different religions and people in the world, and how the differences divide us. There were no lines. We expressed ourselves through our eyes.  here were paintings, loud music and film projectors. I was contacted about the part by Alda Fendi who started a foundation to spread culture throughout Italy. It ran for a week in Rome. It was amazing.

You wrote this book in which you shared the painful experiences of your life. Tell me about the journey of that book and how it led you to meet other women that went through similar ordeals.
I published this book two years ago called, "Reclaiming My Life".  It's the story of how I was able to overcome a difficult time and take back the life I always wanted. When I was promoting my book in Italy, I spoke with others about my experience and I discovered that so many women were violated and kept it a secret like I did.  Women came forth and told me their stories, and it helped me to heal myself. So, I decided to start a support group at my house. We share cookies, tea and coffee and talk about life experiences. Now, one of my purposes in life is to help women. I started a foundation to help women and children who have been abused. I've opened centers in Italy where people can go to get help and rebuild their lives.  The centers are located in the smaller towns where there is no other help.

Since your parents did not support your dreams to be in front of the camera, what did you tell your daughter Giada when she wanted to follow her passion for cooking on The Food Network?
I've always told all of my daughters to follow their dreams and I especially told my daughters to be independent.

Strength and independence are the themes of Veronica De Laurentiis' life these days, and she draws upon her strength to help others in their struggles to reach their goals and to find their own voice. She is tenacious in following her dreams, wasting not one precious second. She recently opened another help center for women in Formia, Italy, and affectionately named it, the “Silvana Mangano Center”, in honor of her mother. She has taken on various acting roles over the years and is currently preparing for a brand new project.

For more information about Veronica De Laurentiis. visit her online at: www.veronicadelaurentiis.com.
at November 03, 2014