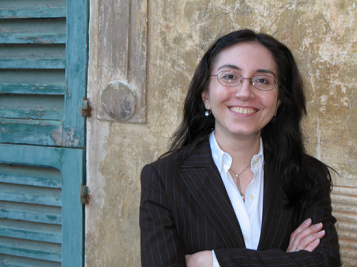 On Day 4 of our week-long series, 7 Days - 7 Women, in which we will profile seven strong, talented women working as filmmakers, writers or visual artists, we spotlight the passion and determination of documentary filmmaker, Vicki Vasilopoulos.

She's not actually Italian, but we're going to make an exception for Vicki Vasilopoulos because she devoted more than a decade of her life raising funds to tell the stories of three Italian master tailors who made their passion their life. When I interviewed her a few years ago while she was tirelessly fundraising for the film, she told me that her goal was to honor the legacy of these master tailors for a younger generation.

For 11 years, Greek-American filmmaker and journalist, Vicki Vasilopoulos labored over a documentary recounting the travails of three master tailors of Italian origin. All those years of hard work and dedication finally paid off. Vasilopoulos completed "Men of the Cloth" and it won a coveted spot at DOC NYC, the largest documentary film festival In America.

According to Vasilopoulos, are three main characters in the documentary:  two of them are Italian-American and one of them is Italian. She met the first, Checchino Fonticoli, when she traveled to Italy on a reporting trip during her tenure as a fashion editor for the men's newsmagazine, DNR. Checchino was the head designer and master tailor at Brioni when she toured the factory and tailoring school in Penne, Italy. That encounter sowed the seeds of the film.

About a year later, she scouted the tailoring terrain in the United States, finding Nino Corvato in New York City and Joe Centofanti in Ardmore, Pennsylvania. Both are considered masters of their trade. Incredibly compelling and sympathetic, their magnetic personalities are what led Vasilopoulos to add them to the documentary. In addition to being superior tailors, they have great personal stories and an amazing passion for their craft. They are also articulate, a quality Vasilopoulos finds crucial in communicating their message to the audience. 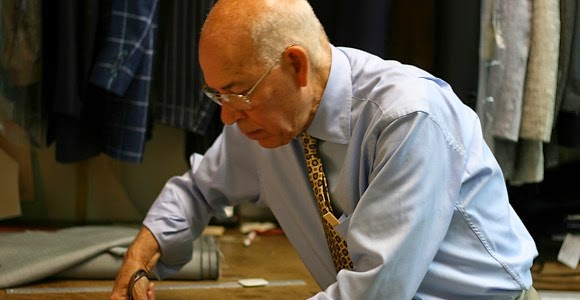 Men of the Cloth is a human story, and that's what makes it universal. The film demystifies their complex artistry, showing how they craft a garment so that it moves and breathes with the person who is wearing it. The film highlights the experiences of these master tailors as immigrant artisans in the United States, and the challenges they face in the twilight of their career. Vasilopoulos was driven to make the film by a desire to honor their legacy and preserve it for future generations of tailors.

Men of the Cloth presents a portrait of these artisans over the course of several years. The film has a poetic, nostalgic tone. All of their journeys begin in Italy, where they were born and learned their trade. Their passion and pride is akin to a religion, and thoroughly Italian.

For more information about the film, visit its website at  http://menoftheclothfilm.com.

Click here to read my interview with Vicki Vasilopoulos.
at November 06, 2014

Email ThisBlogThis!Share to TwitterShare to FacebookShare to Pinterest
Labels: Men of the cloth, Vicki Vasilopoulos, women directors, women in film