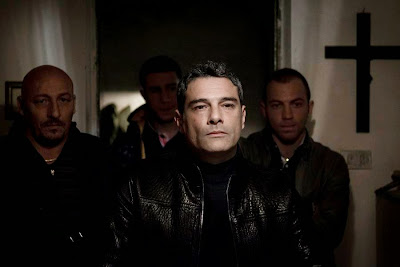 And the date is April 10, 2015! The Hollywood Reporter announced in November that Francesco Munzi's latest film, "Anime nere" will be distributed in North America by Rialto distribution company. The film was a hit at the Venice and Toronto film festivals.

In Munzi's, "Anime nere," Marco Leonardi heads the cast in telling the story of a Calabrian criminal family whose laws of blood and vendetta take precedence over everything. It's the story of three brothers, the sons of a shepherd, close to the 'Ndrangheta, and of their divided soul. Luigi, the youngest, is an international drug dealer. Rocco, Milanese by adoption and a member of the middle class, runs a business funded by his brother's ill-gotten gains. Luciano, the oldest, cherishes the pathological illusion of a preindustrial Calabria, conducting a gloomy and solitary dialogue with the deads. Leo, his twenty-year-old son, represents the lost generation, without an identity. All he has inherited from his forebears is hatred. As a result of a trivial quarrel he carries out an act of intimidation against a bar under the protection of the rival clan. Anywhere else it would have been no more than a prank. Not in Calabria. It's the spark that sets off a blaze. Luciano finds himself in the same predicament as at the time his father was killed many years earlier. In a dimension suspended between the archaic and the modern the characters are drawn into the archetypes of tragedy.

﻿
The world is yours. I don't want to hear you talk anymore. I want to hear others talk about you" ... compelling words from one of the most memorable films in the history of cinema. Marco Leonardi is renowned for his role as the teenage Toto in Giuseppe Tornatore's Oscar Winner, "Cinema Paradiso." The film put Leonardi on the map and made him one of the most sought after actors of his generation.

Born in Australia in 1971, Marco Leonardi has quite an impressive resume with more than two dozen films under his belt. Audiences all around the globe have watched his prolific career through the years. He's become a leading man with a vast range, taking on complicated, diverse roles.

﻿
Marco Leonardi has worked with some of the top names in the industry as well as those just starting out. He's proved he has the versatility to work on an action-packed film with special effects and also to nail those character-driven dramas that reel us right into the character's life and struggles.

In some scenes, it's as if his character is carrying the world's problems on his shoulders, and by witnessing the torment on his face, you feel the heavy burden as it pours from his eyes. He's gone back and forth between television and film, mostly working in Italy these days. When he takes on a role, he whole-heartedly becomes that character, whether he's playing a lover or a fighter.

Because of Marco Leonardi's international appeal, many of his films are available in the U.S. In 2002, the director's cut of "Cinema Paradiso" was released. The version put to rest some questions that were left unanswered in the film. However, there were also a couple scenes that were better left on the cutting room floor. In the end, I do recommend it if you really love the film ... and who doesn't!

It's no doubt that audiences will welcome Marco Leonardi again with open arms at theaters across North America.