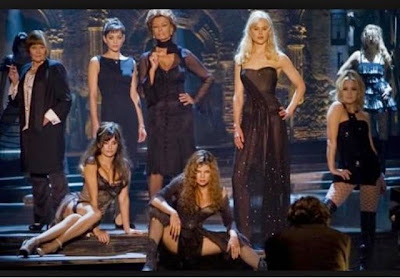 Marion Cotillard's recent Oscar nomination made me think back to one of her roles I thoroughly enjoyed.. Luisa Continu in Rob Marshall's 2009 film, "Nine." So, we revisit my article and interview with Mario Fratti, the creator of the film's Broadway inspiration.

“Rob Marshall recreates "8 ½" beautifully.” Those words are from Author/Playwright Mario Fratti describing "Nine," and Mario Fratti certainly knows a thing or two about the original Fellini film, since he’s the one who initially adapted it for Broadway more than 30 years ago. The musical went on to win 13 Tony awards while in its first run and later in a revival.

The story goes back to 1974 when Fratti had the idea to transform Fellini’s 1963 iconic film, "8 ½" into a stage production. He did so in Italian under the title, "Six Passionate Women," and then collaborated with fellow writer/composer, Maury Yeston to make an English version suited for Broadway. Eight years later, "Nine" opened to rave reviews in New York City. Three decades later, the Fellini classic was revived for a whole new audience, and those who were around in the days of Fellini and his Golden Age of Italian Cinema, could not have been more thrilled to be a part of it. I talked talked with Mario Fratti about his collaboration with Yeston, and he offered this insight. “I wrote a beautiful scene in which Guido explains sex and love to children. Maury loved the scene. So he comes in the next day and changes the scene into a song! That’s how musicals work. It’s a collaboration between the writer and composer, and our collaboration was intense. It took seven long, painful years!”

"Nine" is a lively, colorful musical that follows the life of a  successful Italian director who is experiencing a profound creative and personal crisis right before he is about to start production on his new film. He is surrounded by a cornucopia of women who each represent a different facet of his personality. The plot is similar to "8 ½" in which Marcello Mastroianni played the lead part of Guido Anselmi. In "Nine," Daniel Day Lewis takes the lead, accompanied by an all-star cast. When I spoke with Fratti about the film, he was gleaming with enthusiasm and pride. “What a cast! It will never happen again in the history of film, absolutely stunning.” The cast includes Sofia Loren as Guido’s mother, French actress Marion Cotillard as his wife, Penelope Cruz as his mistress, Nicole Kidman as his muse, Judi Dench as his confidant, Kate Hudson as an American journalist and pop singer Fergie as a prostitute from his youth. It’s been said that Fergie’s audition was so extraordinary, she could have been handed the role right on the spot. “Fergie auditioned in London. I have never seen an audition like that in my life. I have never seen anyone want something more, to prove themselves and say this is mine and claim it.” Rob Marshall, who directed the Oscar-winning film adaption of "Chicago," breathes new life into Fellini’s classic and transforms the big screen into a dazzling Italian-Broadway production.


Whenever a movie is remade or adapted from another medium whether it is a book or a Broadway musical, there are differences, and the same rings true with this film. However, the striking similarity is with the main character, Guido.  Although his last name was changed in the transfer from Broadway to film, Guido has the same dilemmas and personal problems.  Like Marcello Mastroianni did back in the '60s, Daniel Day Lewis articulately communicates the emotions of someone facing such tough challenges and pressure while still holding onto his sense of humor and humility. In an interview with ABC’s Nightline, director Rob Marshall and actress Penelope Cruz weighed in on the personality of the film's beloved Guido. “What he's created, the lies and all of the women that he's been with and so forth, looking for some kind of satisfaction to help him heal. It's not working. It's not working, so you see a man who is actually falling and you know, so timely you see these incredibly powerful figures who are fallen because they can't keep that up. It's doesn't last long. And so what is beautiful about this story is that it's about a man learning to begin again in a different way. In a purer way,” said Rob Marshall. Penelope Cruz added, “I think he is, even if every man would dream about being Guido he is a very special human being. He is one of those people that you know when you are around him you are going to be at a high risk, because if they are happy you are going to be happy. If they are sad, they enter a room and they have an effect on everybody else because they are these big personalities.”
Mario Fratti continues to travel all over the globe giving lectures on Fellini. He is also a prolific author. He recently published a book called "Unpredictable Plays," a collection of 28 plays with unpredictable endings. And for me being the eternal student of Italian cinema, it is such a pleasure and gift to know a writer with such a passion for his work, someone who has truly made a difference in his art and continues to spread his knowledge and experience to others.
For more information about Mario Fratti, you can visit him online at www.mariofratti.com.
at January 19, 2015