Actor Domenico Centamore: Pride and Passion for his Sicilian Culture 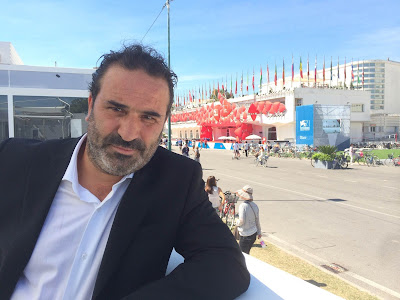 He’s had roles in some of the biggest Italian blockbusters of the new millennium and each time, he portrayed a fearless protagonist willing to fight until the end against organized crime.

Sicilian born actor, Domenico Centamore is proud of his heritage, expressing that pride by working on films that make strong statements against the corruption his culture has had to endure. He’s had roles in  popular mafia-themed films such as I cento passi (One Hundred Steps), La mafia uccide solo d’estate (The Mafia Only Kills in Summer) and Anime nere (Black Souls).

Centamore has an impressive list of credits to his name, always portraying complex characters, some of which seem to border on insanity. His gaze is penetrating, as you can see in the clip below from I cento passi with Luigi Lo Cascio, and he sincerely gives a performance that comes straight from the soul. When we began our informal interview a few weeks ago, Centamore at first seemed a man of few words but then his pride and passion for his Sicilian culture took over and he shared some very special cinematic moments with me. He's especially proud of the work he and his colleagues have done through filmmaking to take a stand against organized crime in their regions and communities. My intention was to talk about the numerous David di Donatello nominations and then sweep for Anime nere but he had so many other things he wanted to talk about. During our interview, I also learned that he is somewhat of a composer and was nominated for a David di Donatello for his work on Pierfrancesco Diliberto's (Pif) La mafia uccide solo d’estate.

Tell me about your experience working on Anime nere.
Working on Anime nere was an extraordinary journey in Calabria. Munzi managed to create a good mix of professional and non-professional actors. He made us recite our lines in Calabrian dialect, and for me it was my first acting experience that was not my dialect. My character, Rosario was a member of the Carbone family. The film shows the stark reality, and unfortunately is the true story of how people in these situations live. The story of Anime nere is really a Greek tragedy that takes place within the ‘Ndragheta of Africo, Calabria.

Since you were previously involved in the mafia stories,I cento passi”and La mafia uccide solo d’estate, was it meaningful for you to be involved with another film that speaks of the life-changing effects of the mafia?

I am from Scordia, which is located in the Sicilian province of Catania. However, Sicily and Calabria are similar lands where the gangs have done a lot of damage, as you can see in these films, Anime nere, I cento passi and La mafia uccide solo d’estate. So, it’s really been a privilege to take part in all these projects.

How do you feel about the success of Anime nere at the David di Donatello’s?
I didn’t attend the David di Donatello awards show this year. However, I was there last year and had a very beautiful experience as I was a nominee for Best Original Song on another great movie, Pif’s film, La mafia uccide solo d’estate. I was at the premiere for Anime nere at the 2014 Venice Film Festival where we received 15 minutes of applause.
Tell me about the song you wrote for Pif’s film.
The name of the song is Tosami Lady. It’s a parody of the song by Ivana Spagna, an Italian singer that in the film, was deeply admired by the mafia boss, Bagarella.

You gave a beautiful, heartfelt performance in I cento passi alongside Luigi Lo Cascio. It seemed a very special role for you.
It was my first film, and remains in my heart for many reasons. The story of Peppino Impastato is heartwarming for Sicilians and he set an example for everyone. We traced his footsteps by shooting in the actual places in Cinisi (the town in which the film was made) where he spent time, and we got to know his mother. So, this character, Peppino, really existed and as we were shooting around town, many people came up to us and told anecdotes about Peppino and the character that I play. It created an extraordinary atmosphere among the actors and we really felt that we were doing something important. It was a unique experience because all the actors, including Luigi Lo Cascio were just starting out. It was also the producer, Fabrizio’s first film and Pif was working as an intern. Every time I see it, I still get emotional.

What are the similarities between Pif's La mafia uccide solo d'estate and Marco Tullio Giordana's I cento passi?
The message is the same. Never forget these people who sacrificed so much for what they believed in.. and we must keep their memory alive.


Centamore is currently working on two television projects. His latest, a role in Rai Uno's Il giovane Montalbano can be seen in upcoming episodes of the popular Italian series. Then in July and August, check him out in the role of Inspector Cariddi on Rai Uno's Lampedusa, a show about the illegal immigrants that arrive on the Italian island. Lampedusa has become the main entry point for immigrants from Africa. Many never make it because of the dangerous conditions on the boats. The issue has emerged as one of Europe's most serious and controversial topics, so this would be a great show to catch if you're in Italy.
at June 25, 2015