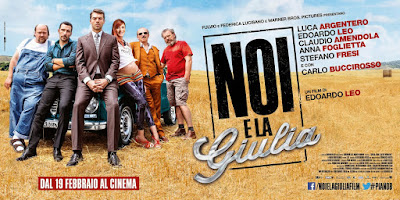 “We’re born with our hands full. That’s why as newborn babies, we clench our fists.. because we have the best gifts we could ever wish for.. innocence, curiosity, a will to live. But then they bring us up to be God-fearing. So, we can’t blame ourselves for fearing everything else as well.”

Edoardo Leo’s “Noi e La Giulia” is a thought-provoking, hilarious trip on waking up one day over the age of 40 and realizing that you don’t have a whole lot in life to account for. “You turn 40 and you realize your best friends are a negro, a cammorista and a pair of losers” proclaims a tearful Fausto, Leo’s politically incorrect, right wing character. 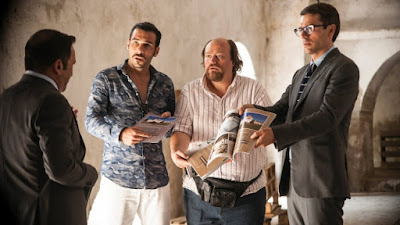 The film begins with a day in the lives of three Roman 40-somethings from completely different backgrounds. There is Fausto (Edoardo Leo), a macho, self-confident on-air personality that sells mock watches and is wanted by creditors, Diego (Luca Argentero), a disenchanted car salesman unable to show emotion and Claudio (Stefano Fresi), who is being left by his wife as he shuts the doors to his family business that began in 1910. The unlikely trio are brought together by a country property they are each looking to buy and turn into an agriturismo.  Since none of them can afford the property on their own, they decide to become partners. Enter Sergio, a slightly bitter left-wing comrade who is looking to collect unpaid wages from Fausto, and Elisa (Anna Foglietta), a good-hearted, pregnant woman jilted at the alter.. and what ensues is a laugh-until-you-cry adventure of a bunch of self-proclaimed failures, that for the first time in their lives, feel like they are succeeding at doing something good. However, it comes with a price as the local countryside thugs threaten to destroy them if they don’t pay “protection money”. Vito (Carlo Buccirosso) leads the way for a whole host of bandits and shady characters relentless on collecting their fees. 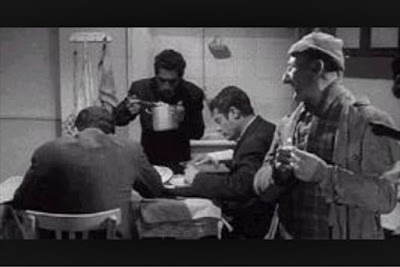 There are so many elements that make this film a modern-day masterpiece. Leo and his cast perfectly convey the magic we feel when a dream is realized. There is the right amount of conflict and tension just when it seems that everything is going well. The comic timing between the characters is impeccable. The professionalism and skill of the actors bring an element of classic Italian cinema. “I soliti ignoti” (The Big Deal on Madonna Street) came to mind many times, particularly when hostage, Vito, complained about the onion in his carbonara. I couldn’t help but think of these petty criminals in the middle of robbing a house, helping themselves to some pasta and cece that was on the stove. This only validates what I have been saying for more than a decade in my articles about contemporary Italian cinema. We have indeed reached a new “Golden Age” in which writers, directors, actors and all filmmakers for that matter, have reinvented cinema for their own generation while keeping in mind the roots of the past. Yesterday, we had Mario Monicelli, Vittorio Gassman, Claudio Cardinale, Marcello Mastroianni and Antonio De Curtis. Today, we have Edoardo Leo, Alessandro Gassman, Anna Foglietta, Luca Argentaro and Stefano Fresi- each actor with his or her own signature style and characterisics but with an echo and nod of respect for those who set the original bar. I believe those maestros of the past would be pleased to see the actors to whom they have passed the torch.

“Noi e La Giulia” has won a whole slew of awards, including two recent David di Donatello’s for Carlo Buccirosso’s performance and Edorado Leo’s direction. The film will be shown this week at the Italian Contemporary Film Festival in Canada. For information on showtimes, visit the festival online at- http://icff.ca/blog/2015/05/07/noi-e-la-giulia/
at June 15, 2015