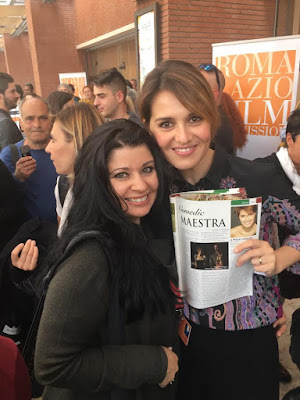 Whether she’s the romantic lead or the evil nun, Paolo Cortellesi is one of the most versatile actresses working in Italian cinema today.


Born in Rome in 1973, Cortellesi didn’t waste much time before leaping into show business. At just 13-years-old, she landed her first job as a vocalist for the theme song of the popular RAI TV show, “Indietro tutta!”. A few years later, she enrolled at Rome’s famous Teatro Blu, where she studied the art of acting.
Upon graduating from acting school, Cortellesi launched her professional acting career in television, and before long, her natural talent for comedy emerged. In 2000, she began working on the TV show, Mai dire Gol, created by the trio of TV and radio commentators known as the Gialappa's Band. The show made her famous for her parodies, and throughout the years, she’s had fun impersonating a number of famous Italians, the more recent hilarious parody being the mayor of Milan, the very prolific politician and business woman, Letizia Moratti.
﻿
In 2000, she also made her film debut in Chiedimi se sono felice (Ask me if I’m happy) by the comedy trio, Aldo, Giovanni & Giacomo. It quickly became clear her niche was comedy and with each new character, she perfected the role of the quirky girlfriend, beautiful, but always getting into some kind of mischief. For us in the United States, it was Meg Ryan and Tom Hanks. One can safely say that in Italy, the equivalent is Paolo Cortellesi and Raoul Bova. The two charmed Italian audiences in 2001 with Massimiliano Bruno’s, Nessuno mi può giudicare (Escort in Love) in which Cortellesi played the role of Alice, an escort that falls in love with one of her clients. Cortellesi won the 2011 David di Donatello for Best Actress for her performance.﻿﻿﻿﻿The comedy duo paired up again in 2014 for the international hit, Scusate se esisto. Although the translation is not exact, the English title is, Do You See Me?. Directed by Cortellesi’s husband, Riccardo Milani, the film was recently shown at the Italian Contemporary Film Festival in Toronto to a packed theater, and was one of Italy’s top comedies last year. Cortellesi and Bova were incredible together as she played the role of an accomplished, international architect returning to Italy to find work. Bova played a flamboyant, handsome gay man, who becomes her best friend. The have great chemistry and impeccable comic timing together. Just like Ryan and Hanks, they are adored for their cat and mouse chase and then enduring moments thereafter. Whether their relationship is love or friendship, the two are a strong big screen couple.﻿﻿
﻿
In following the work of Paolo Cortellesi, I am impressed by many aspects of her career. First and foremost is the diversity of her characters. Many actresses that work in the genre of romantic comedies tend to have one signature character they portray. Even Meg Ryan admitted to this back in her heyday, saying that she was getting tired of that same character and storyline. Cortellesi manages to breathe new life into each role she plays, and in doing so, has inspired writers and directors to create more interesting and complex female characters. The other aspect of Cortellesi that impresses me is her loyal following of fans. She has a die-hard fan club of young women that work tirelessly to promote her work and very latest projects and appearances. They have a strong social media presence, especially on Twitter. While researching for this article, I contacted the group. They responded with wonderful insight about their screen idol, saying that her characters really represent the modern woman. Her characters mirror the contemporary Italian woman as she juggles a family and career while maintaining her beauty and sex appeal. In the case of Cortellesi’s characters, they manage all these challenges with a wicked sense of humor.
Much of Cortellesi’s work is available online, in particular through Amazon. There you will find audio books, music and a few of her films. Chances are good that Scusate se esisto! will be released internationally later this year. Check back here for updates.
at August 21, 2015