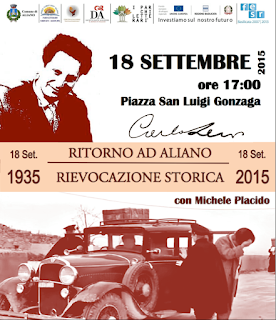 On Friday, 18 September 2015, an event dedicated to the work of author Carlo Levi will kick off a year-long program of events in Aliano, a commune of Matera. Actor/director Michele Placido will take the stage in honor of Levi, performing excerpts from several of his works including “Cristo si è Fermato ad Eboli“ (Christ stopped at Eboli), which of course was later made into an iconic film by Francesco Rosi. Fellow actors Raffaele Nigro and Rocco Brancati will share the stage with Placido along with local theater actors and musicians.


Michele Placido is a jack-of-all-trades when it comes to cinema. He is a celebrated movie star and respected director whose career has spanned over five decades with countless films and international blockbusters.

Placido’s family origins go back to Rionero in Vulture, a town located in the northern part of Basilicata. My family is also from that town and I have visited several times. Furthermore, Michele Placido is a descendent of the infamous bandit and soldier, Carmine Crocco- a fierce man who fought for equal rights and privileges for the people of the south.


Born in 1946, Placido actually grew up in the Puglia region near Foggia and then studied film in Rome at the famous Centro Sperimentale di Cinematografia. He also studied with Silvio D'Amico at the Academy of Dramatic Arts, and made his acting debut in the play, “A Midsummer's Night Dream” in the late 60's. Shortly thereafter, he got into television and cinema and has been non-stop ever since. He was fortunate to begin his career under the direction of several cinematic geniuses like Mario Monicelli, Marco Bellocchio and Francesco Rosi. With guidance like that, it's no wonder he rose to the top of his field. Just seven years after his stage debut, Michele Placido won a David di Donatello for his work as an actor in Marco Bellocchio's "Marcia trionfale."

﻿﻿﻿﻿﻿
﻿
Placido has had much success as a director, especially with his 2001 film, "Un Viaggio chiamato amore" and then in 2005 with "Romanzo Criminale". Both films earned international acclaim and were featured in the programs of film festivals in the United States. However, Placido is most successful in the roles that he plays in front of the camera. He is perhaps best known in Italy for his role as a police investigator fighting organized crime in the 1980's TV series "La Piovra". Since then, he has gone back and forth between the big and small screen with memorable characters that push the envelope and call on the decades of experience that Placido has under his belt. Each of his characters has a quiet intensity to them that seems to be his signature as an actor. He can give dignity to the shadiest of characters and nobility to the most humble. His on-camera presence is strong and at times overwhelming as he demands all eyes on him without even saying a word.

Placido works on project after project and has new releases practically every year. The year of 2006 was memorable as he had roles in two international hits with Mario Monicelli's "Le rose del deserto" and Giuseppe Tornatore's "La sconosciuta" - the emotionally charged story of, Irina, (Kseniya Rappoport) a young woman who escapes the sex trade in her native Ukraine and starts a brand new life in an Italian village, working as a maid to an affluent young family. Michele Placido completely transforms himself into one of the most hated villains you will ever experience onscreen. His character, Muffa, is Irina's controlling, abusive pimp who makes her life a living hell. The outstanding performances given by Placido and Rappoport are reasons enough to watch this film.


Both Monicelli's "Le rose del deserto" and Tornatore's "La sconosciuta", were huge successes outside Italy and further validated Placido's status as a versatile filmmaker. Placido tackles all kinds of roles, but is renowned for his characters who fight against organized crime. Perhaps this stems from "La Piovra". However, in 2008, he went for a change of pace and took on the complicated character of Bernardo Provenzano, a well-known mafia boss, for the television movie, "L'ultimo padrino".Then in  2011, Placido took on a lighter role, sharing the screen with comic maestros, Robert DeNiro and Carlo Verdone in the third installment of Giovanni Veronesi's all-star "Manuale d'amore".

Michele Placido's talents seem to run in the family. His daughter, Violante is a movie star and singer. Her mother is actress Simonetta Stefanelli, who is best known on this side of the Atlantic for her role as Michael Corleone's doomed Sicilian wife in “The Godfather”. Violante followed in her mother’s footsteps and co-starred in a big-budget American project with George Clooney in the 2010 film, "The American".

If you’re anywhere near Matera or are able to make the trip, I imagine that Friday’s performance will be a powerful one, and shouldn’t be missed. For more information about the event, check out Matera Inside.