Interview: Documentary Filmmaker Vicki Vasilopoulos on 'Men of the Cloth' 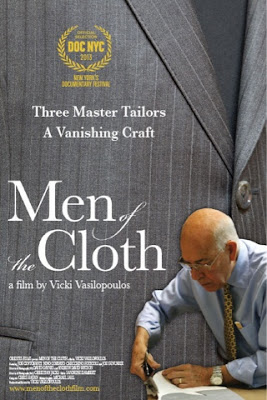 Men of the Cloth is a portrait of three Italian master tailors who confront the decline of the apprentice system as they navigate their challenging roles in the twilight of their career. The film unravels the mystery of their artistry and reveals how their passionate devotion to their Old World craft is akin to a religion.


Italians Nino Corvato, Joe Centofanti and Checchino Fonticoli are master tailors who have spent a lifetime perfecting the skills necessary to construct flawless custom-made suits for their clients in New York City, Philadelphia and Penne, Italy. Now in the twilight of their career, they fear that their Old World knowledge will vanish with them. Enter Joe Genuardi, a tailoring apprentice who reflects the resurgence of popular interest in artisanal craftsmanship as an alternative to corporate mass production, providing hope for the future of this craft.

Filmmaker Vicki Vasilopoulos tells us all about her journey from the idea of making this film to the impact she hopes the film will make on the industry of tailoring.

This project was made from the heart, and all of your dedication and perseverance paid off. Tell me about your journey from the beginning up until now. Did the film meet your expectations?
I first met Checchino on a reporting trip to Italy when I was writing a piece on the luxury market for DNR, the men’s fashion newsmagazine (now a part of Women’s Wear Daily). He gave me a tour of the Brioni factory and school in the town of Penne, in Abruzzo. He was so charismatic and passionate about his craft, it left an indelible impression, and I was mesmerized by the environment there and couldn’t help thinking that craftsmen of his stature and experience were a vanishing breed. That planted a seed that would take eleven years to come to fruition.
Nino was fascinating because he had worked at Brooks Brothers prior to opening his own custom tailoring business in New York, so his career went in the opposite direction from what you’d expect: from a large concern to a throwback from another era! And Joe in the Philadelphia area was the elder statesman. He was born in the U.S. but grew up in Italy and worked in Africa. He ultimately took on the challenge of training a young apprentice, which is a critical turning point in Men of the Cloth.
Nino and Joe both represent aspects of the immigrant experience, and I also liked the fact that Checchino, although he was based in Italy, subverts our expectations and represents the opposite end of the spectrum from these two independent tailors in the U.S. I see Men of the Cloth as akin to the Slow Food of clothing, and these gentlemen’s personal stories were my true inspiration for the film. They’re unsung heroes, and I wanted to celebrate their craft.


What was the reaction from the tailors upon seeing their story on the big screen?
I think that master tailor Nino Corvato in New York has been very happy to have his life portrayed in an authentic way, and audiences have been treating him like a rock start when we do the Q&A’s at screening events and premieres. I don’t think that Checchino Fonticoli in Italy has seen the film yet; I hope to have my Italy premiere in the near future. As for Joe Centofanti, sadly, he passed away before the film was completed, but his daughter Helen (who continues to run the shop that he founded) is thrilled that the film can carry on her father’s legacy.

What has the reaction been like from audiences? What are some of the memorable comments you've received?

Men of the Cloth had a sold-out world premiere at DOC NYC, the largest documentary film festival in America. It was the opening night film at the Craft in Focus Festival in Amsterdam, The Netherlands, and was voted an Audience Favorite at the Three Rivers Film Festival in Pittsburgh, Pennsylvania. It has also screened at the Italian Film Fest Vancouver, the Hamptons Take 2 Documentary Film Festival in New York, the Black Nights Film Festival in Estonia, the Montclair Film Festival in New Jersey, and the La Femme Film Festival for women directors in Los Angeles. It has premiered theatrically in New York, Washington, Philadelphia, Atlanta, Chicago, and Toronto. Upcoming premieres include, Boston, Detroit, Cleveland, San Francisco, and London.
Making the film was a real odyssey, and I wasn’t sure that I’d be able to finish it, given the commitment and sacrifices that it necessitated. But the audience reaction has been so gratifying! I never get tired of hearing people tell me how the film touched them or made them nostalgic or more appreciative of this glorious craft. At a film festival in Indiana in August two audience members called the film “exquisite,” and I was humbled by such an intense reaction.

Do you think this film will encourage younger generations to pursue a career in tailoring?
I’d like today’s generation to value the intrinsic beauty and integrity of a custom-made/bespoke suit and all that it represents – it’s the sum total of a master tailor’s entire life experience – and it’s imbued with his very essence.
I often hear from both young and middle-aged audience members that want to pursue a career in this venerable craft, and I find that very encouraging.  When my theatrical screening tour concludes this fall, I’ll be doing additional screenings at both art museums and colleges with Fashion Design and Italian Studies programs in an effort to continue this inter-generational dialogue.


What is your dream for this film and its legacy or long-term effect on the tailoring industry?
My dream is that Men of the Cloth will continue to build on its grassroots following around the world. I hope to have a PBS broadcast, and I’m looking forward to the release of the Director’s Cut DVD (with extra features) as well as the digital release on streaming platforms like iTunes, Amazon and Vimeo. Fans can sign up for the newsletter at MenOfTheClothFilm.com to receive updates and I encourage them to email queries to info@menoftheclothfilm.com.

If you're in the vicinity of Rochester, New York, Men of the Cloth will be shown at George Eastman House's Dryden Theatre as part of the Labor Film Series on Friday October 9th at 8 PM. Filmmaker Vicki Vasilopoulos will present the film and answer audience questions afterwards.