He writes, acts and directs. He’s one of the most beloved comedians and personalities of his time. His name is Paolo Villaggio. Having achieved legendary status in Italy, he worked his way out of poverty to become a household name in his country.


Born in Genoa in 1932, Villaggio grew up poor as his family felt the financial strains of World War II.  He held several odd jobs throughout his teenage years and into his 20’s, but it was a television talk show host who ended up changing the course of Villaggio’s life.  In 1967, he was discovered by Maurizio Costanzo.  Costanzo urged Villaggio to join a cabaret in Rome. Shortly thereafter, he moved on to the small screen and delighted television audiences across Italy with his part in the TV show, Bonita Loro.
﻿ After his experience in television, he began writing short stories for L’Espresso and L’Europeo, two popular magazines in Italy. The stories were based on one character, an accountant named Ugo Fantozzi. The publishing house, Rizzoli published the book, Fantazzi, based on those stories. Creating the cinema version was an easy transition. The character Ugo Fantozzi, who has been described as a “good-natured, bumbling and thoroughly mediocre bureaucrat who can do nothing right and whom everyone takes advantage of” became so popular in Italy, people began to use the name as a noun. The word, “Fantozziano” was born from Villaggio’s character and is referred to in some dictionaries as “a situation that is embarrassing or in poor taste.” Furthermore, as the last name Fantozzi is a popular name in Italy, the actual Fantozzi’s have founded an association, which appointed Paolo Villaggio as an honorary member. Critics have called the character the most original comic "mask" in Italian cinema since Totò. Villaggio describes the character of Fantozzi as a metaphor of  “the inept and put-upon everyman” similar to Dilbert, here in the United States.

On the 40th anniversary of the first film in the Fantozzi series, Villaggio presented a restored version at the (2015) Festa del Cinema in Rome. There were 10 films in all with different directors including Luciano Salce, who directed the first two, Neri Parenti and Domenico Saverni.

Watch the cast of Fantozzi in a clip from the 2015 Festa del Cinema of Rome...


Villaggio has appeared in dozens of films and has worked with Italy’s top filmmakers including Federico Fellini, Roberto Begnini and Ermanno Olmi, just to name a few. Those familiar with his work obviously have favorites. My favorite, and one I highly recommend is Lina Wertmüller's 1994 Ciao Professore. I saw the film about 15 years ago and it was the first time I ever saw Paolo Villaggio. The strong emotion I felt while watching that film was one of my main motivations for beginning to write about Italian cinema. Villaggio stars as a Milanese elementary school teacher transferred to a rough district in Naples. 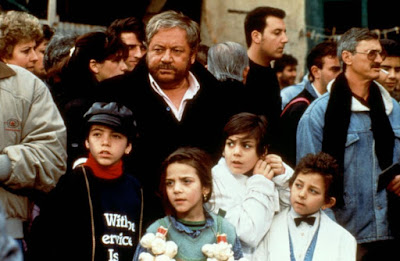 Villaggio’s character is forced to come to grips with the way of life in this Neapolitan town and how poverty keeps many of his students from attending class. Although his students are youngsters, many have to work to put food on the table at home. Others lean towards a life of crime and the streets. Villaggio’s character has a hard time accepting the situation and physically goes out to find them and brings them to class. The children, although fighting him tooth and nail, become attached to him because it’s the first time in their lives that someone cares enough to actually go out and track them down. In the end, Villaggio’s character is transferred back up north and he has to say goodbye to the children. It is such a heart-wrenching story, perhaps because there is some truth to it, not just in the south of Italy, but all over the world. I see so many films and rarely does one stay with me the way that Ciao Professore has. I credit that to Paolo Villaggio’s performance. He succeeds in bringing humanity and empathy to his characters through the way he delivers his lines, through his sharp but subtle sense of humor and through his strong, sincere eyes.

Paolo Villaggio passed away on July 3, 2017. He left behind a cherished legacy of works. Watch Ciao Professore on Amazon.
at December 01, 2015