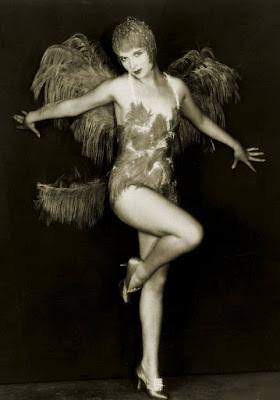 We’ve all seen those classic black and white pictures of the silent ﬁlm era... the feathers, the sequins, the glamour with all the mystery and nostalgia from an inﬁnite time forever captured in a photo. Silent ﬁlm star, Louise Brooks is often at the center of those fascinating portraits. Although Brooks seems to be the picture-perfect poster girl from days gone by, her life was far from perfect.  She lived through many dark days and suffered from bouts of profound depression.

I was originally doing a story just on the life and work of Louise Brooks. Then, I discovered an Italian connection, which so often happens. So, I am thrilled to share the story of Brooks on this blog about Italian art and cinema, because clearly she had an impact on both. I talked with Thomas Gladysz, an ofﬁcial expert on all things Louise Brooks. He told me about Brooks the person and Brooks the actress. He also talked about the Louise Brooks Society, an online community that he started to pay tribute to her,  and why after so many decades, people are still drawn to the silent ﬁlm star. And for further proof that there is indeed always an Italian connection, Gladysz told me about the sexy Italian comic strip character, Valentina, inspired by Brooks. 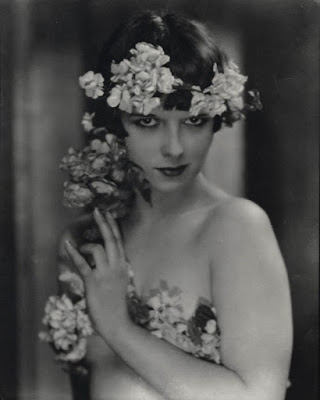 After researching Louise Brooks and ﬁnding so much interest in her nearly a century after her ﬁrst ﬁlm, my immediate question is what makes Louise Brooks so timeless; and why, after so many years, do people still love her?
That is a question I’m often asked. Its answer lies at the heart of the legend (some would say cult) that has grown up around the actress. Today, I think it’s fair to say Louise Brooks is among the most popular silent ﬁlm stars in the world. Her renown has eclipsed that of many of her better known contemporaries. Those who don’t know her name at least know her image, or the name of the character she played in Pandora’s Box, Lulu. Today, Louise Brooks is as popular – and in some quarters as revered - as Garbo, Keaton or Chaplin. In India, there is a village that celebrates Charlie Chaplin’s birthday and reveres him as an almost god-like ﬁgure. Similarly, there are scores of individuals all over the world who have elevated Brooks to a near mythic status. They idolize her, and collect every picture they can ﬁnd. Today, Louise Brooks is better regarded than she was at the height of her fame. There was a period in the 1940s and 1950’s and even the 1960’s when Brooks was pretty much forgotten. She was considered an obscure ﬁgure. The story of Louise Brooks is the story of her rise and fall and reemergence – not only within the annals of ﬁlm history, but within popular culture and the larger realm of public awareness.

Which brings me to the question - why do you admire her?
I’ve had a crush on Louise Brooks for nearly 25 years. Thankfully, my wife doesn’t mind. There is something about Brooks that appeals to me. What that is exactly – I’m not sure. At times, I am drawn to her remarkable beauty, at other times to the qualities which deﬁne her as an individual, and at other times to her dramatic life story. Each I ﬁnd compelling. I guess my attraction, my admiration, my interest is a kind of intellectual crush. Similar to the crushes you might have had in school, I admire her from afar. The distances are those of time, and place. Brooks was dead by a decade by the time I came across one of her ﬁlms. Brooks is often in my thoughts. Does that sound a little obsessed? Nevertheless, I am always researching some aspect of her life. Or watching silent ﬁlms, or listening to music from the 1920's, or reading the ﬁction of F. Scott Fitzgerald. I love the Jazz Age. Admittedly, I am one of those who collect everything I can ﬁnd (and afford) on the actress. 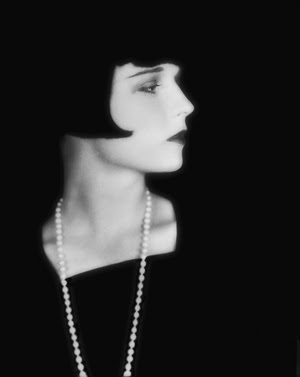 Tell me about the Louise Brooks Society?
I started the Louise Brooks Society because I wanted to tell others about this remarkable individual and what she achieved as a dancer, actress, and writer. Kevin Brownlow – the great British ﬁlm historian, described Brooks as “One of the most remarkable personalities to be associated with ﬁlms.”  Kenneth Tynan, the great English theater critic, described her as “the most seductive, sexual image of woman ever committed to celluloid.” The Louise Brooks Society is devoted to the appreciation of the life and ﬁlms of the actress - and its website at www.pandorasbox.com is both home to a fan club and an online archive of all things Brooksie. What’s neat is that numerous fans have contributed articles, pictures, and other information to the website – as have ﬁlm scholars and even members of Brooks family. Others have translated articles or conducted research in libraries and archives around the world. For my own part, I spend a fair amount of my spare time researching the life and times of the actress. And over the years, I have uncovered a good deal of new information about Brooks and her career.


﻿
What sorts of information have you uncovered?
All kinds of things, from the mundane to revelatory! I’ve compiled a bibliography of her ﬁlms which run hundreds of pages. I ﬁgured out who actually sang the theme song from Prix de Beaute. I discovered an editorial comic strip which sketched the affair between Brooks and Charlie Chaplin, as well as an instance when her best known silent ﬁlm, Pandora’s Box, was shown in New Jersey in 1932 with a synchronized soundtrack. Each is a piece to the puzzle.

I read that she was abused as a child.  How did that impact the direction of her life?
Yes, she was abused as a child. Brooks once said, “I was done in by a middle aged man at the age of nine.” On another occasion she said, “I was loused up by my Lolita experiences.” What we know about this incident is detailed in the Barry Paris biography. Without psychoanalyzing her, I would say the abuse she suffered as a child did impact her life – both in her relationship with her own sexuality and in her sense of self-esteem.

That is a good question. Like many other American artists, Louise Brooks is differently and perhaps better appreciated in Europe. It was also in Europe, after decades in obscurity, that she was rediscovered. She made three ﬁlms on the continent, Pandora’s Box and Diary of a Lost Girl for the Austrian-born German director G.W. Pabst, and Prix de Beaute, a French ﬁlm directed by the Italian Augusto Genina. It is because of these three ﬁlms that Brooks is remembered. The two Pabst ﬁlms are each considered a masterpiece; Lottie Eisner wrote about them in an essay tellingly titled, Pabst and the Miracle of Louise Brooks. 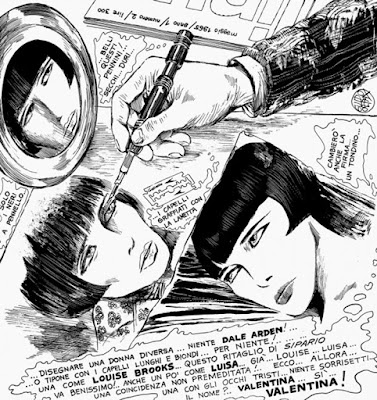 And speaking of Italian, tell me about Brooks' impact on the culture of Italy.
Louise Brooks has enjoyed a decades-long vogue in Italy. Her ﬁlms frequently played there, and Italian critics were some of her earliest champions. And of course, many know the Valentina commix by Guido Crepax. They were directly inspired by the actress.

Tell me more about Valentina and its creator.
Valentina was a character by an Italian artist named Guido Crepax. He started drawing Louise Brooks into his comics and graphic novel-type work in the mid-1960's. These were longer form, not just throw-away comic strips or comic books. They were published in the United States in a magazine called Heavy Metal, which was sort of an alternative culture magazine. They're a really big deal in Italy. A couple years ago, there was a big celebration of Crepax's life and art at a gallery in Rome, (Rome Movie) and Louise Brooks' image, depicted as Valentina was front row and center. Guido Crepax was the main guy responsible for developing her image. But there have been other artists who were smitten with her and have drawn her in to all types of comic books and graphic novels. One just came out about a year ago in France, so she is still in vogue in Europe.
Watch a clip from my interview with Italian director Marco Tullio Giordana in which he talks about the influence of Louise Brooks and Valentina on his work.. 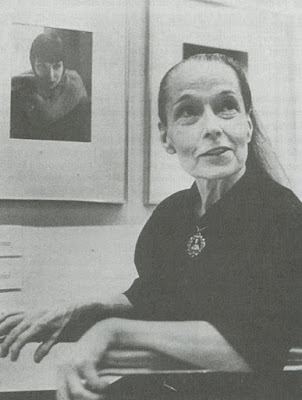 What were her ﬁnal years like?
Louise Brooks spent the last few decades of her life in Rochester, New York. She moved there at the invitation of James Card, the ﬁrst ﬁlm curator of the George Eastman House. Basically, she lived a quiet life. She was poor, and was hobbled by arthritis. She drank a lot, read books, and watched a lot of movies. She even watched some of her own ﬁlms for the ﬁrst time. Louise Brooks also reinvented herself, as a writer. She wrote a ﬁctionalized autobiography – which she destroyed. She also wrote thousands of remarkable letters – to ﬁlm historians, friends, and other writers. And, she wrote essays and articles for publications like Sight and Sound, Focus on Film, Positif, and Film Culture. Many of her essays were collected in Lulu in Hollywood.

In your opinion, what is Louise Brooks’ legacy.
That’s hard to say. She certainly left her mark on the world. Louise Brooks was an actress – but she was also an artist, an icon, and a 20th century muse. Whatever Louise Brooks’ legacy is, it is safe to say that she had a huge impact on the silent ﬁlm era, and how we look back at that time in history.


Thanks to people like Thomas Gladysz who work to preserve her image, Louise Brooks is still with us today through photographic exhibitions, DVD’s and the worldwide web.  Also check out Gladysz's radio station- RadioLulu - a Louise Brooks-inspired, silent ﬁlm-themed, online radio station which plays music from the Twenties, Thirties, and today.
at December 01, 2015