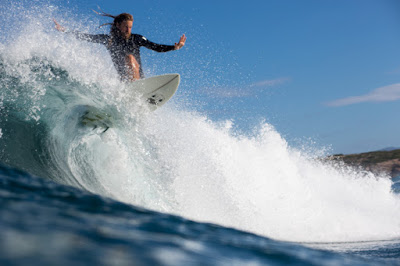 It's not exactly Italian cinema but it is full of heart and soul- the two most important qualities of any Italian filmmaker.

"Bella Vita" is the story of surfer Chris Del Moro's return to his homeland of Italy. His mother is American and met his father there while she was in college. The two split when Del Moro was a child, but he spent nearly every summer in Pisa with his father's family. For more than a decade, he was busy building an amazing career as a world-renowned surfer and artist. During those years, he didn't get back to Italy. This film marks his return after a 15-year absence.

Under Jason Baffa's direction with a beautiful soundtrack by Lee Ferris and David Bowick, "Bella Vita" is a nostalgic adventure through the heart of Tuscany and the vast, tumultuous sea surrounding the Italian peninsula. The film begins with Del Moro reuniting with his close friends and family in Italy. Before long, his surfer friends join him and they embark on a trip along the coast looking for some good surf. They don't find exactly what they're looking for but have a lot of fun while searching. After those friends leave, Del Moro takes the time to visit neighboring towns and cities, including Venice and some nearby marble quarries, perhaps in Lucca. There, we meet artisan craftsmen creating the handmade products Italy is known for. They tell us about the evolution of technology and how it's helped in making things a bit easier, even though the products are still artfully made piece by piece. He also introduces us to the new generation of surfers beaming with raw passion for what they do. 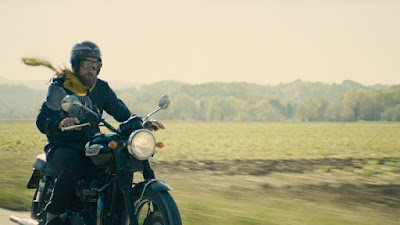 After Del Moro's melancholic story of family, friends and love, the aspect I appreciated the most while watching this documentary was the high quality of filmmaking. Baffa's pacing and timing is impeccable and works so well with the sometimes dramatic, sometimes thought-provoking soundtrack that brings us along with Del Moro and his friends as they ride the waves and explore the seaside and towns of central Italy. I also appreciated the opening collage of land and seascapes, which includes a stunning shot of Cristo Redentore above the sea of Maratea in Basilicata.

I am not familiar with the world of surfing, so this was my first introduction to Chris Del Moro. He is a gentle soul with a peaceful, tolerant nature. He embraces obstacles with his positive outlook and genuine concern for people and the environment. This is felt throughout the film but especially towards the end when he is commissioned to paint a mural along the boardwalk of a beach in Pisa. He embraces the bad weather and a crowd of school children wanting to contribute their stroke of a brush to his nautical masterpiece.

In what could have been a tearful ending, Del Moro turns into a positive experience as he visits his grandfather's grave to give him the proper goodbye that he wasn't able to give when he passed away. Then he literally rides off into the sunset with the backdrop of Tuscany's signature, elegant cypress trees. Del Moro is a great example for younger generations to follow, and all of us for that matter who tend to get caught up in the chaos of our own lives without taking a moment to pause and think about those around us.

"Bella Vita" is available through Netflix and Amazon Video. You can also find Chris Del Moro on Instagram, where it states that he's a vegetarian and environmentalist. We need more people like him in the world. Glad he's out there spreading the word.